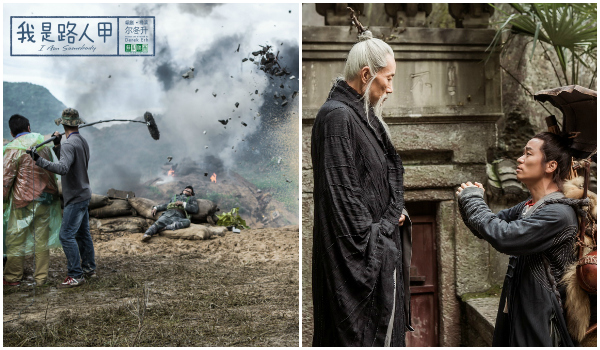 Bowing to an underwhelming $27 million last weekend, Hollywood Adventures (横冲直撞好莱坞) failed to live up to its lofty expectations and couldn't attract Chinese moviegoers unimpressed with its premise and humor. This weekend seven new domestic and one new imported film will try to heat up what has been a tepid start to the summer movie season, with two in particular capable of breaking out.

Fifth Generation director Chen Kaige (陈凯歌), best known to Western audiences for his Academy Award nominated Farewell My Concubine, brings an adaptation of the best-selling martial arts novel Monk Comes Down the Mountain (道士下山) to cinemas on Friday. Monk follows innocent Daoist priest He Anxia (played by comedic actor Wang Baoqiang) as he heads down the mountain to escape a famine that has struck his temple. The film boasts an impressive cast in Aaron Kwok (The Detective), Chang Chen (Helios), Lin Chi-ling (Red Cliff), and Fan Wei (If You Are The One), and should play well to wuxia fans and middle-aged crowds.

Monk was originally set to be released during February's Chinese New Year period, but was sidelined due to SARFT's ban on films and tv shows featuring actors who had used drugs or solicited prostitution. Actor Jaycee Chan, son of martial arts star Jackie Chan, was arrested last August on possession of marijuana, but director Chen petitioned the government for months saying it would be impossible to edit out Chan from the movie or reshoot his scenes with another actor.

According to EntGroup's EFMT Index, Monk Comes Down the Mountain has the highest levels of awareness and intent to purchase out of this week's new releases. Barring a complete disaster, we see Monk easily surpassing Chen Kaige's previous best Sacrifice which earned $28.6 million in December 2010.

The second film this weekend with breakout potential is director Derek Yee's I Am Somebody (我是路人甲). Yee takes viewers to the booming eastern city of Hengdian -- "China's Hollywood" and home to the largest outdoor film studio in the world. Young aspiring actors and actresses migrate to Hengdian by the thousands and I Am Somebody follows one such actor Wan Guopeng as he tries to catch his big break. Yee recruited actual Hengdian extras for the main roles and adjusted the screenplay as he shot allowing the amateurs to ad-lib for more natural dialogue.

I Am Somebody could also benefit from several high-profile celebrity endorsements. After seeing a preview screening in Hong Kong, Tony Leung praised the film's realism and saw similarities between Wan Guopeng's dreams and his own aspirations to become an actor thirty years prior. Actress Shu Qi (If You Are The One) also wrote a glowing review and was reminded of her own experiences leaving Taiwan for Hong Kong with nothing but $500 and the desire to act. In a country where the slogan "The Chinese Dream" is plastered across cities nationwide, we think the theme of "following your dreams" will find a receptive audience especially among younger crowds.

Tags: Hollywood Adventures, Monk Comes Down The Mountain, I Am Somebody, North-america, China Box Office