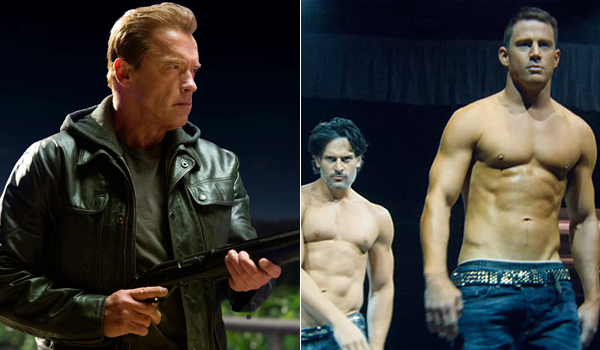 LOS ANGELES - July 1, 2015 - According to Fandango, the nation's leading digital destination for moviegoers and fans with more than 36 million unique visitors per month*, "Terminator Genisys" and "Magic Mike XXL," in their opening holiday weekend, are battling for the top position on Fandango's Fanticipation movie buzz indicator, scoring 90 and 88 out of 100 points, respectively. "Jurassic World" and "Inside Out" in their fourth and third weekends, follow closely behind with scores of 84 and 83 points, respectively.

According to a survey of more than 1,000 "Magic Mike XXL" moviegoers on Fandango:
· 93% are Channing Tatum fans;

· 51% would like to see the movie in a dine-in theater that serves alcohol;

· 71% selected Tatum as the returning "Mike" star with the most appeal;

· Former NFL star and current talk show host, Michael Strahan, was voted as the "XXL" newcomer that fans were most excited to see on the big screen.

On Fandango's movie recommendation show, "Weekend Ticket," Karger interviews "Magic Mike XXL" stars Channing Tatum and Stephen "tWitch" Boss. "If you think about all the different choreographed positions we were in, that's hard, " reveals Boss. Tatum adds, "That's ‘Magic Mike' - it was like geometry or strip-ometry." The full episode can be found at http://www.fandango.com/WeekendTicket.

To celebrate the release of "Terminator Genisys," Fandango Movieclips is rolling out a helpful primer for the uninitiated at Things to Know Before You See Terminator Genisys. Fandango has also unveiled a colorful infographic about classic cinematic automatons at Robots, Androids and Cyborgs from the Movies.