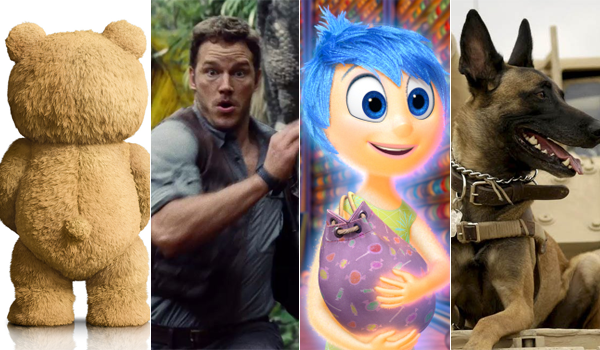 Inside Out grossed $8.78 million on Tuesday to lead the daily box office for a second straight day. In the process, the critically acclaimed 3D computer animated blockbuster from Disney and Pixar surpassed the $200 million domestic milestone yesterday. Inside Out was up a healthy 27 percent over Monday and down 33 percent from last Tuesday. With a stronger than expected $200.84 million twelve-day take, Inside Out is currently running 8 percent ahead of the $185.91 million twelve-day gross of 2013's Monsters University and 18 percent behind the $244.03 million twelve-day take of 2010's Toy Story 3.

Jurassic World held steady in second with $7.47 million. The 3D blockbuster sequel from Universal and Legendary increased 14.5 percent over Monday and decreased 43 percent from last Tuesday. Jurassic World has grossed a massive $514.37 million through 19 days of release. The film is already the fifth highest grossing film of all-time without adjusting for ticket price inflation and before much longer will move past the $534.86 million final gross of 2008's The Dark Knight to move into fourth place. Jurassic World is running 10 percent ahead of the $468.27 million 19-day take of 2012's Marvel's The Avengers.

Ted 2 took in $3.84 million to remain in third place. The Seth MacFarlane directed comedy sequel from Universal and MRC was up a modest 4 percent over Monday. Ted 2 was clearly affected by Warner's Magic Mike XXL and Paramount's Terminator Genisys both entering the marketplace on Tuesday evening. Ted 2 surpassed the $40 million mark yesterday and has grossed a significantly softer than expected $41.03 million in five days. That places the film a very disappointing 43 percent behind the $71.60 million five-day start of 2012's Ted.

Max continued to claim fourth place with $1.94 million. The modestly budgeted family film from Warner Bros. and MGM was up a very promising 31 percent over Monday's performance. Max has grossed $15.58 million in its first five days. That is in line with expectations and places the film 15 percent ahead of the $13.57 million five-day launch of last year's Earth to Echo (which opened on a Wednesday).

Fox's Spy rounded out the day's unchanged top five with $1.07 million. The Melissa McCarthy led comedy was up 13 percent over Monday and down a solid 37 percent from last Tuesday. Spy surpassed the $90 million mark yesterday and has grossed $90.48 million in 26 days, thanks in part to displaying strong holding power over the past two weeks.