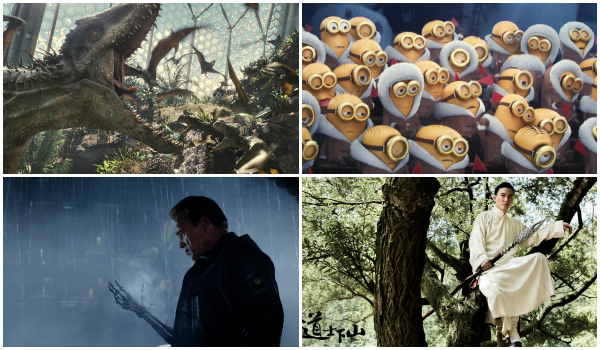 Arnold Schwarzenegger whimpered back into domestic theaters this weekend with Terminator: Genisys, but he and Paramount could be saved by international fans who were much more kind giving the reboot $74 million across 46 territories. After last weekend’s early start in 10 smaller markets, Genisys is up to $85.5 million overseas and $129.66 million worldwide.

Terminator: Genisys opens July 9 in Germany and Italy, and July 10 in Spain and Japan.

Ahead of its North American release next weekend, Minions took in an estimated $54.3 million this weekend (+44%) from 26 markets for an early international total of $124.2 million.

The animated franchise film opened on top in all 15 new territories it was released this weekend and retained the top spot in Australia, UK/Ireland, and Brazil for a second weekend. It also scored the biggest opening day of all-time for an animated film in Germany, Spain, Argentina, and Colombia. Germany opened with $9.0 million, 70% higher than Despicable Me 2's opening weekend. Spain and Colombia both doubled DM2's opening with $5.9 million and $3.4 million respectively, while Argentina tripled DM2's opening weekend with $5.5 million. Minions has grossed $16.2 million in Brazil, $31.4 million in UK/Ireland, and $15.1 million in Australia.

Next weekend sees 25 territories including France, Mexico, and Russia open day-and-date with the U.S. and Canada.

Roaring to another $42.0 million (-50%) from 66 overseas territories this weekend for an international cume of $826.9 million, Jurassic World stampeded past Avengers: Age of Ultron to become the world’s 5th highest grossing film of all-time with $1.385 billion. China held very strong in the face of local competition, dropping just 40% for $9.4 million this frame and $222 million overall. It also passed Avatar to become the fourth highest-grossing movie of all-time in the Middle Kingdom. Jurassic World opens in its final territory Japan on August 5.

Disney/Pixar’s Inside Out conjured up another $18.6 million (-30%) from 43 overseas territories this weekend, lifting the international cume to $117.3 million and the global total to $363.46 million. The film’s only new territory this weekend was Poland.

Inside Out posted strong mid-week numbers in Australia and France thanks to holidays and held well throughout the weekend. The family film was up 38% this weekend Down Under for a $13 million total, while France fell just 34% for a $12.2 million cume. In Russia, where the film has grossed $17.2 million so far, Inside Out is now the second highest grossing Disney/Pixar animated release ever behind Frozen. Other top markets include Mexico ($24.9M), Argentina ($9.4M), Brazil ($8.1M), and Colombia ($5.5M).

Ted 2 is struggling both domestically and overseas where it grossed just $8.8 million (-56%) this weekend from 31 territories for an early international total of $36 million. Combined with NA’s disappointing total, Universal’s foul mouthed teddy bear has grossed $94.3 million worldwide. Australia was Ted’s top holdover where it fell 3 spots and 45% for $1.8 million and an 11-day total of $6.4 million. Germany dropped 63% for $1.2 million and an 11-day total of $5.6 million. Ted 2 will open in 33 more territories over the next few months including the UK/Ireland, Poland, Turkey, and Peru next weekend.

Avengers: Age of Ultron finally blasted into its last overseas territory Japan this weekend and posted a very strong estimated two-day total of $6.5 million. That makes it the biggest opening weekend for a Marvel Cinematic Universe release in Japan, beating the Avengers opening by 60% in local currency. Its opening has also already exceeded the total runs of both Captain America films and both Thor films in local currency. In addition, Ultron scored the biggest opening weekend for an imported film this year beating out fellow Disney titles Big Hero 6 and Cinderella. Though its off to a strong start, Ultron’s legs will be tested over the next several weeks as Genisys, Inside Out, Minions, Jurassic World, and MI5 are released in quick succession. Ultron has grossed $929.3 million overseas and $1.383499 billion globally since its release in late April.

Hollywood Adventures couldn’t stave off very poor word of mouth and grossed just $6.3 million (-77%) in its second weekend of release in China. The adventure/comedy produced by Furious director Justin Lin has underperformed with a 10-day total of $46.7 million.

Insidious: Chapter 3 spooked $2.7 million (-32%) out of international moviegoers in 51 territories this weekend, bringing its overseas cume to $42.1 million and its global haul to $93.3 million. Germany opened to $720K while Austria bowed with $110K amidst the European heatwave. Future openings include France (July 8), South Korea (July 9), Australia (July 16), and Brazil (July 30).