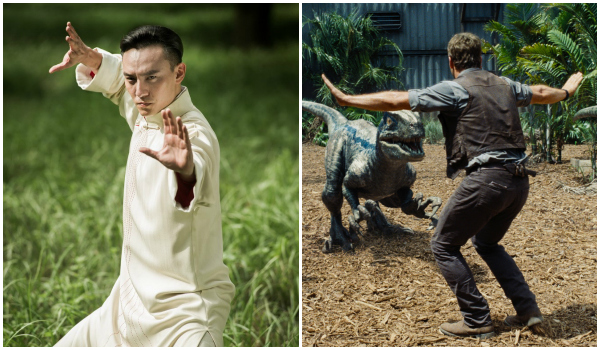 Lacking the local blockbuster that had been predicted to bring out moviegoers during the protection period, China's summer box office failed to erupt yet again this weekend. Weekly (June 29-July 5) box office receipts totaled just ￥674 million ($108.5 million), down 10% from the corresponding frame last summer, and marks the second consecutive weekly drop.

Leading the weekend, director Chen Kaige's 3D IMAX martial arts epic Monk Comes Down the Mountain (道士下山) took in a solid $37.26 million from ~150,000 screenings including Thursday evening previews. Reviews for the action/adventure flick were mixed on social media platforms (6.2 on Mtime, 5.6 on Douban, and 6.8 on Weibo) and its Saturday gross had a minimal bump (+39%) indicating Monk is skewing older and away from family audiences. Monk is already Chen's most successful work to date surpassing Sacrifice ($29.9 million) in just 3 days.

Jurassic World is winding down its China run, but held strong with $9.41 million (-40%) from ~47,000 screenings on its fourth and final weekend. That brings the total for Universal's global blockbuster to $221.7 million and places Jurassic as the fourth highest grossing film of all-time in China behind Avengers: Age of Ultron ($235M), Transformers 4 ($319M), and Furious 7 ($390M). Despite the great hold, Jurassic's 30-day imported film license will expire on Thursday, preventing it from passing Ultron. Universal must be disappointed that the run will be cut short with gas still left in the tank and one can only imagine how much longer Hollywood studios will put up with this treatment.

In third place, underperforming Hollywood Adventures (横冲直撞好莱坞) grossed just $6.4 million, down 74% in its second weekend, from ~56,000 screenings. The Justin Lin produced action/adventure film has earned $46.65 million in 10 days of release.

Newcomer I Am Somebody (我是路人甲) posted a decent $6.5 million from ~45,000 showtimes including Thursday night previews to take the fourth spot. Director Derek Yee's romantic comedy is set amid the backdrop of China's largest film studio and features an unknown cast which probably caused walkup moviegoers to choose other fare in celebrity obsessed China. However, Somebody will look to hold well throughout the month of July behind very strong word of mouth and celebrity endorsements.

Rounding out the top 5 this weekend was holdover SPLII (杀破狼2) with $4.4 million (-61%) from ~35,000 screenings. The HK/China coproduced action film has grossed $86 million after 18 days of release and passed April's Wolf Warriors (战狼) to cement Mainland actor Jacky Wu as a bankable male action star.

Tags: SPLII, I Am Somebody, Hollywood Adventures, Jurassic World, Monk Comes Down The Mountain