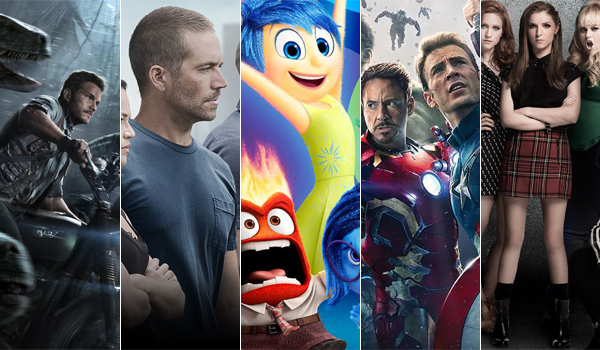 The Independence Day holiday weekend is over, but the bean counters in Hollywood still have plenty of reason to celebrate as 2015's second quarter generated a new record haul of $3.08 billion domestically. The April 1 through June 30 period bested 2013's previous record of $3.02 billion, while improving 9 percent from the same period last year.

A major component to the record performance came early on when Furious 7 shattered pre-summer records with a $147.2 million opening weekend on its way to a stellar $351 million lifetime gross in North America, easily becoming the biggest hit of the franchise to date and serving as an emotional and wildly successful cinematic send-off to the late Paul Walker.

The box office hits kept coming from there. Kicking off summer, Marvel's Avengers: Age of Ultron scored the (at the time) second best debut in history with $191.3 million to kick off May.

A little over one month later, of course, Universal's Jurassic World sneaked past the first Avengers' $207.4 million opening title in 2012 with a (still stunning) $208.8 million mid-June launch. The Chris Pratt-led mega-blockbuster from director Colin Trevorrow has continued to impress ever since, setting more records than one can easily count. The film has remained at a pace ahead of 2012's Avengers and has a fair chance to become only the second movie in history (after Avatar) to crack $650 million in North America alone.

Other notable hits included Pixar's return with Inside Out, besting Avatar as the best opener in history by an "original" (non-sequel/non-adaptation) film with $90.4 million last month. Strong word of mouth has further propelled the film over the last few weeks.

Meanwhile, Pitch Perfect 2 has blown past expectations since its $69.2 million opening in May as its gone on to earn over $182 million stateside -- plus the official announcement of a third entry in the series to come in 2017. Its opening weekend went head-to-head with Warner Bros.' Mad Max: Fury Road, another film that leaped beyond most expectations when it bowed to $45.4 million and has since displayed excellent legs for a franchise revival that's transcended its core fan base to soak up seemingly endless critical and commercial buzz.

WB also had a great showing from the Dwayne Johnson disaster flick, San Andreas -- another surprise box office performer with more than $143 million earned domestically through the end of June.

Looking at summer alone (May 1 - June 30), the halfway point of the industry's most lucrative season claimed $2.31 billion -- the second-highest total ever, just over 3 percent behind 2013's $2.39 billion. Estimated ticket sales (based on dividing grosses by average ticket prices) so far give this summer the second-highest attendance (behind 2013 again) since 2004. This summer is up more than 12 percent from the same point in 2014.

The story of three massive opening weekends in such a short time span is symbolic of the many records that have fallen so far this year. Between Furious 7, Avengers: Age of Ultron, and Jurassic World, that trio represented the first three films to ever debut north of $145 million within 10 weekends of each other. The closest that had ever come to happening before was in 2012: The Hunger Games, Marvel's The Avengers, and The Dark Knight Rises all posted $152.5 million-or-higher opening weekends, but were separated by 17 weekends.

Below, you can check out last quarter's top ten films based on box office receipts earned April 1 through June 30.