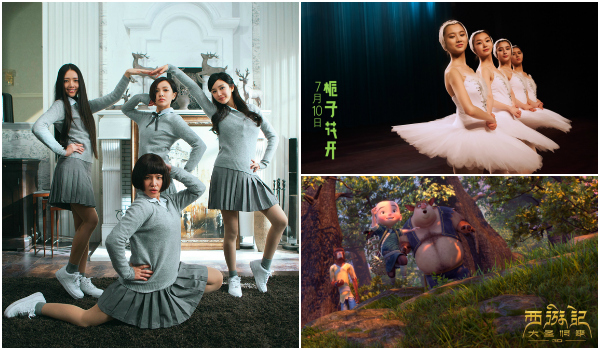 According to EntGroup's EFMT Index for this weekend's new releases, box office expectations are highest for Tiny Times 4.0 (小时代4：灵魂尽头), the final chapter in novelist/screenwriter/director Guo Jingming's Tiny Times series. The story follows four Shanghai girls through high school, university, and post-college life as they navigate the pitfalls of relationships, cat-fights, and the latest fashion trends. Despite heavy criticism condemning the young protagonists as materialistic and vain, the Tiny Times series has proven very popular with the Post-90s female demographic, grossing a combined $211 million since summer 2013. Last summer's third installment alone grossed ($84.77 million) and we think this fourth and final film will bring out even more young fans (and the boyfriends they drag along).

Aimed at a similar demographic and receiving just as much buzz as Tiny Times is the youthful romance pic Forever Young (栀子花开2015) based on a hit song by He Jiong (何炅) from 2004. He, the congenial host of China's hippest variety show Happy Camp, also takes the reins as first time director, and producers are hoping his rabid fans will come out to support the film.

Two animated entries, Monkey King: Hero is Back (西游记之大盛归来) and GG Bond Movie: Ultimate Battle (猪猪侠之终极决战), will fight for family audiences this weekend. Monkey's robust previews this past weekend ($1.58 million) and early reviews praising it as one of the strongest technically animated features to come out of China's fledgling animation industry bode well for a good run.

The two other films opening this weekend are Nezha (少女哪吒), which might find some appeal on the arthouse circuit and Dear, Don't Be Afraid (亲，别怕), a horror movie.

Below are trailers for Forever Young, Tiny Times 4.0, and Monkey King: Hero is Back plus the title song to Forever Young performed by He Jiong and 5-year old Angela Wang.

Tags: China Box Office, North-America, Tiny Times 4.0, Forever Young, Monkey King: Hero is Back, Monk Comes Down The Mountain, I Am Somebody