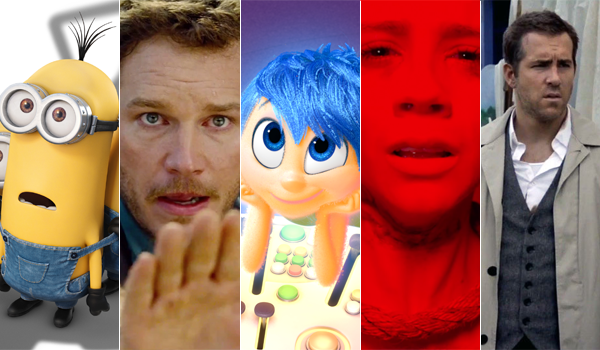 Minions delivered in a very big way this weekend with a $115.72 million debut. The highly anticipated 3D computer animated spin-off from Universal and Illumination Entertainment opened on the high end of its very lofty pre-release expectations. Without adjusting for ticket-price inflation, Minions scored the second largest opening weekend take ever for an animated film; behind only the $121.63 million start of 2007's Shrek the Third. Minions opened just ahead of the $110.31 million debut of 2010's Toy Story 3. Minions was an impressive 28.5 percent stronger than the $90.03 million three-day start of 2013's Despicable Me 2 (though it should be noted that Despicable Me 2 opened on a Wednesday). Minions was clearly helped out by goodwill from both Despicable Me films and by a very high-profile marketing campaign that was seemingly everywhere. Potential sequel fatigue for the film may have also been turned into a non-factor in this case thanks in part to the film's nature as a spin-off.

Minions opened with $46.04 million on Friday (which included an estimated $6.2 million from Thursday evening shows that began at 6 p.m.), decreased 16 percent on Saturday to gross $38.86 million and declined 21 percent on Sunday to gross $30.82 million. That placed the film's opening weekend to Friday ratio at 2.51 to 1, which is a sign of initial front-loading. Mixed critical reviews and the film being the third installment of its franchise will likely lead to the film being significantly more front-loaded than both previous Despicable Me films were. At the same time, Minions did receive a strong A rating on CinemaScore, which suggests that the film is going over better with audiences than it has with critics. Going forward the film should also be helped out by the lack of high-profile animated films on the remainder of this summer's schedule.

The audience breakdown for Minions skewed towards female moviegoers (59 percent) and towards moviegoers under the age of 25 (55 percent). Family audiences made up 60 percent of the film's overall audience. Minions marks yet another blockbuster level performer for Universal in 2015, as it joins the likes of Jurassic World, Furious 7, Pitch Perfect 2 and Fifty Shades of Grey.

Universal also claimed second place this weekend as Jurassic World took in $18.15 million over the frame. The 3D sci-fi adventure blockbuster sequel was down a very solid 38 percent from last weekend's performance (which had been deflated a bit by Independence Day falling on Saturday). Without adjusting for ticket price inflation, Jurassic World registered the seventh largest fifth weekend performance of all-time. Jurassic World has grossed a massive $590.69 million through 31 days of release, which leaves it just $9.31 million away from becoming the fourth film ever to reach the $600 million domestic milestone. Jurassic World is currently running $37.74 million and 7 percent ahead of the $552.95 million 31-day take of 2012's Marvel's The Avengers.

Inside Out followed closely behind in third with $17.67 million. The 3D computer animated blockbuster from Disney and Pixar was down 41 percent from last weekend. That represented a solid hold, especially when considering the new direct competition the film faced from Minions this weekend. Inside Out continues to outpace expectations with a very strong 24-day take of $284.20 million. That leaves the film just $15.80 million away from reaching the $300 million domestic milestone. Inside Out is running an impressive 19.5 percent ahead of the $237.77 million 24-day gross of 2013's Monsters University and 16 percent behind the $339.24 million 24-day take of 2010's Toy Story 3.

Paramount's Terminator Genisys placed in fourth with $13.83 million. The pricey Arnold Schwarzenegger led 3D sci-fi action sequel fell 49 percent from last weekend. Terminator Genisys has grossed $68.85 million in twelve days of release. The film continues to perform below its already scaled back expectations and is running 26 percent behind the $92.66 million twelve-day gross of 2009's Terminator Salvation. At this rate Terminator Genisys is likely to fall short of reaching the $100 million domestic mark; especially with Disney's Ant-Man, Sony's Pixels and fellow Paramount release Mission Impossible: Rogue Nation all entering the marketplace throughout the rest of July.

Warner's The Gallows opened in fifth place with $9.81 million. The low-budget horror film from New Line and Blumhouse Productions opened on the lower end of its modest expectations. The Gallows had generated high levels of online activity in the days leading up to its release, but that ultimately didn't help at the box office this weekend. Potential for the film was likely limited somewhat by its R rating and its poor critical reviews. The Gallows opened nearly on par with the $10.20 million start of The Lazarus Effect earlier this year.

The Gallows started out with $4.51 million on Friday (which included an estimated $900,000 from Thursday evening shows), fell a troubling 31 percent on Saturday to gross $3.11 million and declined 30 percent on Sunday to gross $2.19 million. That gives the film an opening weekend to Friday ratio of just 2.18 to 1. That isn't a good early sign going forward and neither is the film's modest C rating on CinemaScore. The audience breakdown for The Gallows skewed slightly towards female moviegoers (52 percent) and slightly towards moviegoers under the age of 25 (53 percent).

Fellow Warner Bros. release Magic Mike XXL held up well this weekend with a sixth place take of $9.58 million. That was down just 25.5 percent from last weekend's holiday deflated performance. The modestly budgeted Channing Tatum led sequel has displayed strong holding power over the past week, but in the bigger picture the film is still performing significantly below expectations with a twelve-day take of $48.30 million. Magic Mike XXL is currently running a lackluster 38 percent behind the $77.86 million twelve-day gross of 2012's Magic Mike.

Meanwhile, Self/Less debuted in eighth place with $5.40 million. The Ryan Reynolds led sci-fi film from Focus and Gramercy opened to disappointing results and had been widely expected to do so heading into the weekend. Self/Less opened 57 percent below the $12.69 million debut of 2013's R.I.P.D. Self/Less started out with $1.96 million on Friday, decreased a slim 1 percent on Saturday to gross $1.94 million and declined 22 percent on Sunday to take in $1.50 million. That gives the film an opening weekend to Friday ratio of 2.75 to 1. Self/Less did receive a solid B+ rating on CinemaScore, but in all likelihood that won't matter going forward given the film's soft start this weekend.