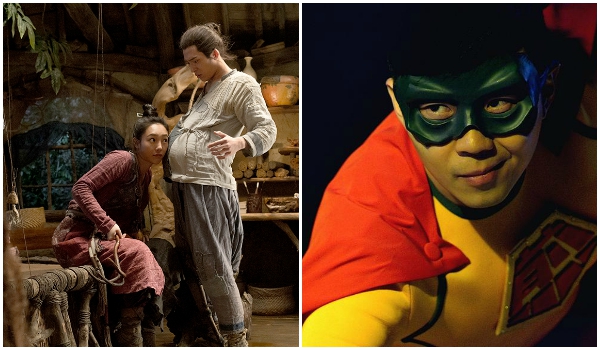 If last weekend was the turning point for China's tepid summer box office where young fans lined up to see their idols in Tiny Times 4.0 and Forever Young and incredible word of mouth for The Monkey King: Hero Is Back pushed the weekend total to a record $110 million, then this weekend should be considered the height of the summer movie season. Six new titles enter cinemas, among them two homegrown films which have potential blockbuster status.

First up this weekend is Monster Hunt (捉妖记), a family friendly film with the distinction of being the Mainland's first mixture of live-action and CGI generated characters, and is directed by Raman Hui, the supervising animator on Shrek as well as the co-director of Shrek The Third. Monster Hunt will open Thursday on about 50% of China's screens and should be a hit across the entire country, both in higher tier cities such as Beijing, Shanghai, and Guangzhou that favor quality entertainment and lower tier cities that enjoy blockbuster films. Monster Hunt has the highest level of awareness according to EntGroup China's EFMT Index.

Aimed at a completely different demographic, Jianbing Man (煎饼侠) is China's first attempt to spoof the superhero genre and is directed by online personality Da Peng (大鹏). Western audiences may recall Da Peng and Conan O'Brien clashing when Conan discovered he had shot-for-shot ripped off his late night show's opening sequence. The two traded barbs from opposite sides of the world, but ended up on friendly terms. Da Peng then went on to create a massively popular online sketch show for Sohu.com called Diors Man (屌丝男士) and hopes to bring that following into theaters when Jianbing Man opens on Friday. In addition to Da Peng playing the title role, Jianbing Man (named after a delicious fried pancake from Northern China) also boasts a large contingent of both Mainland and International celebrity cameos with action star Jean-Claude Van Damme getting much of the spotlight in the marketing for the film. Jianbing Man should give Monster Hunt a run for its money this weekend, but its mainstream appeal could also be regionally limited by Da Peng's northeastern dialect and style of humor. Nonetheless, the comedy has the highest intent to purchase out of any new release this weekend according to EntGroup.

Also opening this weekend is Shaun The Sheep which somehow avoided the protection period's blackout on imported films. The stop motion film from Aardman Animations posted solid numbers in other international territories such as the UK ($20.3 million) and France ($5.3 million). Unfortunately, competing against Monster Hunt and Monkey King will not be an easy task.

Diexian Jinghun (碟仙惊魂) a Chinese version of Ouija, Magic Barber (爱情魔发师), and The Unforgettable Heroes (诺素之鹰) round out the rest of the local releases this weekend.

Interested Western audiences can also catch some of these films in local cinemas. Magnum Films will release Monster Hunt in Australia/New Zealand on July 23 and Jianbing Man in select US cities on July 24.