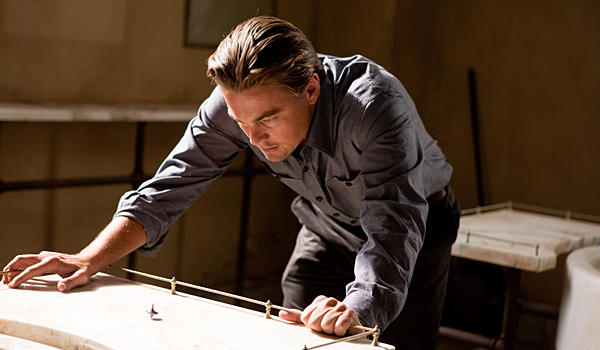 One of my favorite movies turns a youthful five years old today, July 16.

Part of me questioned the notion of writing a "throwback" tribute to Inception, a recent entry in the grand scheme of cinema, as it would also be my second Christopher Nolan-themed story this summer. The part looking for a legitimate excuse to write about this movie again won the day.

It's easy to indulge in hyperbole just to get my point across about how much I loved (and continue to love) Inception. I'll do my best to avoid that. Still, I've picked apart and studied virtually every aspect of the film since seeing it five times in theaters and purchasing it the minute Best Buy's doors opened on the Blu-ray's street date. Nolan's decade-long process of developing, writing, and eventually directing the film formed what fans like myself consider to be master-class work in many of the film's creative departments: from Wally Pfister's breathtaking cinematography to Lee Smith's finely-tuned-and-never-confused editing; Guy Hendrix Dyas' wonderful production design to Chris Corbould's innovative special effects supervision; John Papsidera's international casting... the list goes on.

And then there's Hans Zimmer's timeless musical score. I'm not just talking about the explosive and brassy "BWAAAAM!" which proliferates Internet memes to this day. Zimmer's dramatic and ethereal soundtrack provided an album's worth of favorite tracks for fans. The climactic piece, "Time", is easily one of the veteran composer's most popular pieces of work -- and deservedly so. The next time you're on a flight and getting ready to land, do yourself a favor and listen to that track on repeat a few times. Ditto for "Mombasa" while on your daily run.

In fairness, a lot of us were predisposed to loving Inception. Nearly one year after The Dark Knight became a box office monster and solidified Nolan's rapidly growing fan base, he released a brief synopsis for his next project: "A contemporary sci-fi actioner set within the architecture of the mind."

In the summer of 2009, the first teaser trailer offered brief glimpses of dream thief Dom Cobb, a.k.a. Leonardo DiCaprio (long overdue for his first summer blockbuster role, and who collaborated with Nolan in the development of his character's emotional arc). Also teased were shots of a spinning top, mazes, an instantly iconic hallway fight scene, and other imagery that bewildered audiences at the time.

Rather than confuse, though, it intrigued us -- exactly what the marketing campaign continued to do.

Throughout the rest of 2009 and early 2010, several brilliantly executed trailers from the hands of Warner Bros., Legendary, and Nolan's own input slowly peeled away just enough mystery around the dream-sharing plot to imbue the feeling of needing to see this movie -- even when we knew little of what it was supposed to be about. That ad campaign reached its zenith two months ahead of the movie's release, when the third trailer debuted in front of Iron Man 2 in theaters. I can still remember politely barking (if there is such a thing) at the people behind me to quiet down when it began playing.

As you probably know, that trailer spawned countless YouTube parodies and mash-ups with other movies (including one of my own), while also becoming a literal template for future movie trailers to mimic. Zack Hemsey's "Mind Heist" -- featured in the game-changing trailer above -- is sometimes mistaken as "the Inception theme" even though its melody never plays in the film itself. That's the power of great marketing behind a great product, and the spoofs are still going strong.

If you've ever wondered how the movie would (roughly) play out in real time, here's your answer.

In July 2010, the film itself posted the second best opening weekend in history for a strictly original movie: $63 million -- second only to Avatar's $77 million seven months earlier -- and it achieved that without the aid of 3D prices.

At the time, social media was just starting to become a major driving force for word of mouth within hours of a movie's release, and Inception was early proof of that. The film and its ambiguous-yet-cathartic ending were part of an instant "water cooler moment", from the tweets of Twitter to actual office water coolers on Monday morning. It wasn't long before casual audiences joined the ranks of Nolan and sci-fi fans in the ticket line to see what the hype was all about. A cerebral, big-budget summer blockbuster both entertaining and thought-provoking? That's a rare find.

All told, Inception gave box office enthusiasts one of the most memorable runs by a high profile movie in recent memory, generating $293 million in North America. Overseas returns were just as impressive, if not more: earning a massive $824 million worldwide, the film remains one of the highest-grossing original movies ever. Discounting the Avatar, Frozen, and Finding Nemo sequels set to come out within the next half-decade, Inception is technically number one among non-franchise movies.

In a nutshell, Inception was one answer to questions film fans asked (and still do) in growing concern for years: are remakes and sequels all that Hollywood has left to offer? Is creative ambition discouraged more than its encouraged?

Mr. Nolan and his team gave us a 148-minute-long answer that translated as a resounding "no" when given proper creative freedom to trust the audience with unique and challenging narratives (something he'd been doing since Following and Memento). To this day, that's still uncommon among big-budget flicks released during the summer months. George Miller's widely praised Mad Max: Fury Road is a recent exception that will probably have its fans writing five-year anniversary stories in 2020.

Since Nolan's success with the film and The Dark Knight Trilogy, many talented filmmakers looking to break into the mainstream have been given the chance to make big-budget movies based on their ability to tell original stories with strong characters. Recent examples include Jurassic World helmer Colin Trevorrow (Safety Not Guaranteed), Duncan Jones (Moon, Source Code, next year's Warcraft movie), and Rian Johnson (Looper, Brick, 2017's forthcoming Star Wars: Episode VIII). The list goes on.

Looking ahead, rumors about what Nolan's tenth film will be continue to circulate. An announcement may even be on the horizon, with some speculating it will be another original concept. Regardless, movies like Inception have guaranteed I'll always be joining other fans among the first in line for his future projects.

From both a personal and professional stance, Christopher Nolan's seventh feature film still resonates in a way which very few movies do. I often come back to it when I find myself needing some kind of artistic motivation. After all, the subtle (and not-so-subtle) philosophies within the film are partly metaphors for the creative process.