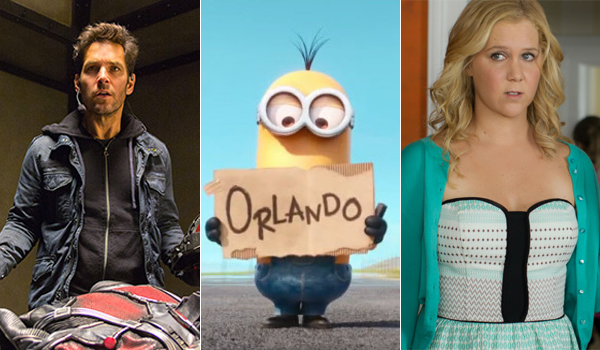 Sunday Update: Disney's Ant-Man debuted in first place this weekend with an estimated $58.04 million. The Paul Rudd led comic book film from Marvel opened towards the lower end of pre-release expectations, which had tended to range from $57 million to $65 million heading into the weekend. Ant-Man delivered the second smallest debut ever for a Marvel Cinematic Universe film, which had been largely expected given the lower profile status of Ant-Man in comparison to other superheroes in previous MCU films. Ant-Man did open 5 percent ahead of the $55.41 million debut of 2008's The Incredible Hulk and a reasonable 11 percent behind the $65.06 million start of 2011's Captain America: The First Avenger.

Ant-Man opened with $22.64 million on Friday (which included a sizable $6.4 million from Thursday evening shows), fell 14 percent on Saturday to gross $19.44 million and is estimated to decline 18 percent on Sunday to take in $15.96 million. That gives the film an estimated opening weekend to Friday ratio of 2.56 to 1. The audience breakdown for the film skewed towards male moviegoers (58 percent) and towards moviegoers over the age of 25 (55 percent). Family audiences made up an estimated 28 percent of the film's overall audience (which was a bit higher than the 22 percent families represented for Avengers: Age of Ultron back in May). Ant-Man received a strong A rating on CinemaScore, which is a good early sign going forward. However, the film will also be facing tough direct competition over the next few weeks from the likes of Sony's Pixels, Paramount's Mission: Impossible - Rogue Nation and Fox's Fantastic Four.

3D grosses were responsible for an estimated 42 percent of the overall grosses for Ant-Man this weekend.

Minions was down one spot from last weekend to claim second with an estimated $50.24 million. The blockbuster 3D computer animated spin-off from Universal and Illumination Entertainment didn't hold up as well as had been expected, as it was down a sharp 57 percent in its second weekend. Minions likely took a larger hit among the non-family portion of its audience, which had been fairly large in size last weekend. While Minions is set to be significantly more front-loaded than both of the previous installments of the Despicable Me franchise, the film is still performing extremely well in the bigger picture, especially with its relatively modest cost for a computer animated film in mind.

Minions zoomed past the $200 million domestic mark this weekend and has grossed $216.73 million through ten days of release. That places the film 9.5 percent ahead of the $197.93 million ten-day take of Despicable Me 2, though Minions does have an advantage in the current comparison as a result of Despicable Me 2 being a Wednesday release. Whether or not Minions is able to stabilize next weekend will likely have a lot to do with just how much appeal Pixels ultimately has with family audiences.

Fellow Universal release Trainwreck was off to an impressive start this weekend with an estimated third place take of $30.24 million. The Amy Schumer led comedy from director Judd Apatow opened just ahead of its wide ranging expectations, which were anywhere from $20 million to $30 million. Strong critical reviews, high levels of pre-release hype (surrounding both the film and Schumer) and the built-in fanbases of Schumer and Apatow all helped lead to the film's successful debut. Trainwreck opened 15 percent ahead of the $26.25 million debut of 2011's Bridesmaids and only 1.5 percent below the $30.69 million debut of 2007's Knocked Up.

Trainwreck started out with $10.7 million on Friday, (which included an estimated $1.8 million from Thursday evening shows), increased 3 percent on Saturday to gross $11.0 million and is estimated to decrease 22 percent on Sunday to take in $8.54 million. That places the film's estimated opening weekend to Friday ratio at 2.83 to 1, which is an impressive figure for a romantic comedy, especially during the summer months. The audience breakdown for Trainwreck skewed heavily towards both female moviegoers (66 percent) and moviegoers 30 years and older (63 percent). Trainwreck received an A- rating on CinemaScore, which is likely a bit stronger than it sounds given that previous films from Apatow have a tendency of displaying stronger holding power than their ratings on CinemaScore would suggest. Trainwreck is extremely likely to hold up very well throughout the rest of the summer, though whether or not its holding power can reach the same levels of Knocked Up or Bridesmaids remains to be seen.

In other box office news, Inside Out surpassed the $300 million domestic mark after placing in fourth this weekend with an estimated $11.66 million. With the initial rush-out for Minions now out of the way, Inside Out stabilized nicely this weekend by decreasing just 34 percent from last weekend. The blockbuster 3D computer animated film from Disney and Pixar has grossed a very impressive $306.36 million in 31 days and is very likely to continue to hold up well going forward thanks in part to strong word of mouth and the relative lack of other high-profile animated releases throughout the rest of the summer.

Universal's Jurassic World rounded out the weekend's top five with an estimated $11.36 million. In the process, the 3D sci-fi adventure blockbuster sequel became just the fourth film ever to surpass the $600 million domestic mark without adjusting for ticket price inflation. Jurassic World reached the $600 million mark in just 36 days; easily making it the fastest film ever to do so (previous record holder 2009's Avatar reached the mark in 47 days). Jurassic World continues to display strong holding power in its own right, as it was down a very solid 37 percent (especially when considering the new direct competition it faced from Ant-Man). Jurassic World has grossed a massive $611.13 million in 38 days and is now just $12.23 million away from surpassing the $623.36 million final gross of 2012's Marvel's The Avengers to move into third place on the all-time unadjusted domestic list.

Saturday Update: Disney reports that Ant-Man bowed to $22.64 million on Friday, not terribly far behind the expected range heading into the weekend. Still, that represents the second lowest opening day in Marvel's Cinematic Universe, leading only 2008's The Incredible Hulk ($21.5 million) and falling about 12 percent short of 2011's Captain America: The First Avenger ($25.7 million), which was the last Marvel pic to open in mid-to-late July. Despite tempered enthusiasm heading into release, early word of mouth appears generally positive with a 92 percent Flixster score (although that is comparable to Avengers: Age of Ultron's 90 percent) after an 80 percent Rotten Tomatoes critics' score. In short, it remains to be seen what kind of legs we can expect from Ant-Man at this point. BoxOffice is projecting a $57.5 million opening weekend.

Universal and Illumination's Minions dropped a sharp 68 percent from opening day last week to $14.6 million on Friday. Mixed word of mouth among older crowds is likely to blame, as well as the head-to-head competition for family crowds with opener Ant-Man. Through eight days of play, the prequel/spin-off has tallied $181.1 million domestically, which is a little over 3 percent more than Despicable Me 2 earned through the same point. The studio's weekend projection is $46.6 million, while BoxOffice's official projection is a little more optimistic at $47 million.

Debuting in a strong third place yesterday was Trainwreck with $10.7 million. Amy Schumer's leading role and screenwriting debut rode a wave of strong promotion over the past few months, culminating in this week's Emmy nomination for her Comedy Central show and a controversial GQ photo shoot with Star Wars characters. For director Judd Apatow, this marks his best career opening day, topping Knocked Up's $9.805 million back in June 2007. Yesterday's bow also exceeded that of 2011's Bridesmaids ($7.84 million) and 2005's The 40-Year-Old Virgin ($7.06 million). Early word of mouth is strong with an 83 percent Flixster user score and 85 percent from Rotten Tomatoes critics, indicating a fruitful run ahead for the raunchy rom-com. BoxOffice projects a $30 million opening frame.

Moving into fourth place, Pixar's Inside Out added $3.38 million yesterday -- representing a 38 percent decline from last Friday. With $298.08 million in the bank through 29 days of release, the flick is pacing almost 24 percent ahead of Up and on Saturday will become the studio's third title to ever pass $300 million in North America. BoxOffice projects an $11 million weekend.

Filling out the top five, Jurassic World was off 41 percent from last Friday to $3.2 million yesterday. In the process, it became only the fourth movie in history to pass the $600 million domestic benchmark, and did so in record time (36 days) after Titanic (252 days), Avatar (47 days), and Marvel's The Avengers (54 days). World also surpassed Titanic's original $600.8 million domestic run prior to its 2012 release. With $602.97 million in the bank to date, the mega blockbuster is pacing nearly 7 percent ahead of the first Avengers. The studio's official weekend estimate is $10.4 million.

Friday Update #2: Sources tell BoxOffice that Ant-Man headed for $65 million during its debut frame, while Trainwreck is on pace for $37 million. Ant-Man should have no problem pushing Minions out of the #1 spot.

Friday Update #1: Disney reports this morning that Ant-Man collected $6.4 million from Thursday night shows. That's a positive start to the weekend which tops The Wolverine's $4.0 million Thursday launch as part of its $53.1 million weekend in July 2013. For a comparison closer to home in the MCU, last year's Guardians of the Galaxy pulled $11.2 million on Thursday night, ultimately landing a $94.3 million opening frame. Should Ant-Man hold up similarly to its Marvel counterpart, it would translate to a weekend around $53-54 million. However, Thursday night multipliers are far less consistent than opening day as a whole, so a higher weekend tally is certainly still on the table.

Meanwhile, Minions is forecast to remain in the top two in this weekend. Depending on how Ant-Man turns out for Disney and Marvel, the Despicable Me prequel could have an outside shot at first place again.