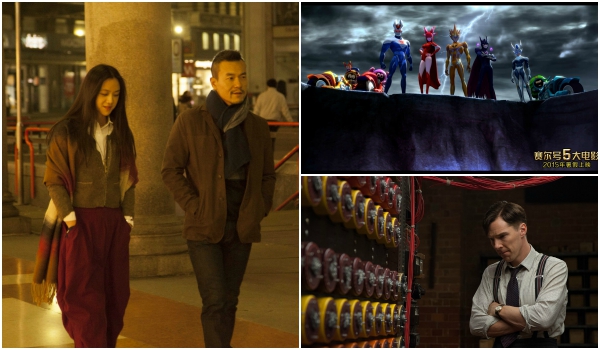 Last weekend's box office hit a record $183 million as the top three films (Monster Hunt, Jianbing Man, and Monkey King: Hero Is Back) accounted for $172 million. The three well-received and highly-praised local films have broken nearly every domestic record in the books and while this weekend's box office totals won't reach the same heights, with little in the way of competitive new releases, the holdovers are poised to dominate again.

This weekend's biggest release is Only You (命中注定), an adaptation of Norman Jewison's 1994 romantic comedy starring Marisa Tomei and Robert Downey, Jr. with Tang Wei (Lust, Caution) and Liao Fan (Black Coal, Thin Ice) taking on the roles in this version. While previews took in $250K and played to sold out houses last weekend, we don't see this movie breaking out of the pack of middling Chinese rom-coms.

Another new entry this weekend is Seer 5 (赛尔号5：雷神崛起), the fifth in a series of animated adventure films based on an online game. Installments have been released every consecutive summer since July 2011 and a solid fan base has contributed a total of $34.2 million. Unfortunately, Seer 5's release comes at a time when both Monkey King and Monster Hunt will steal away its core family audience.

Two imported films also enter cinemas this weekend - Benedict Cumberbatch and Keira Knightley's Academy Award winning The Imitation Game and the 2012 Italian thriller The Lithium Conspiracy directed by Davide Merengo. The Imitation Game has grossed $220 million worldwide since last November, but despite Cumberbatch's popularity on the Mainland, it won't get much more from Chinese audiences. Merengo's debut Night Bus was a surprise hit in China in 2010 and grossed $270K.

Other films opening this weekend are Aura Star: Attack of the Temple (奥拉星：进击圣殿), Dream Defender (守梦者), Psychic (通灵之六世古宅), and The Hero Chiyou (战神蚩尤).