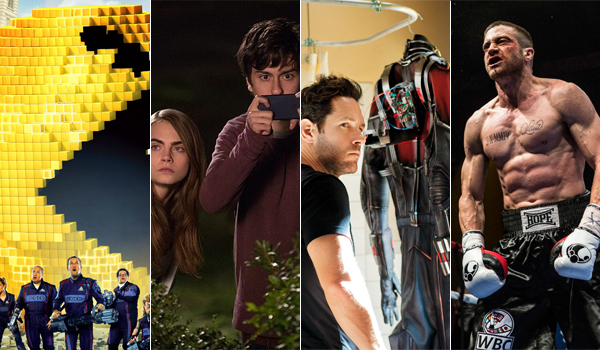 Sunday Update: Disney's Ant-Man took in an estimated $24.77 million this weekend, which was good enough to lead the weekend box office for a second consecutive frame. The Paul Rudd led superhero film from Marvel was down a sharp 57 percent from last weekend, but was able to remain in first place this weekend thanks in part to the disappointing debut of Pixels and the soft third weekend hold of Minions. Ant-Man surpassed the $100 million mark this weekend and has grossed a solid $106.08 million in ten days. The film continues to perform in line with the lower end of pre-release expectations. Ant-Man is currently running 9 percent ahead of the $97.06 million ten-day take of 2008's The Incredible Hulk (which fell 57 percent in its second weekend to gross $22.14 million) and 10 percent behind the $117.42 million ten-day gross of 2011's Captain America: The First Avenger (which declined 61 percent to gross $25.55 million).

Sony's Pixels debuted in a very close second place with an estimated $24.00 million. The Adam Sandler led 3D action comedy was off to a disappointing start and even with scaled back expectations had been widely expected to lead the box office heading into the weekend. Ultimately the film's high-profile retro video game concept and the high levels of buzz generated by its initial trailer weren't enough to overcome poor critical reviews and Sandler's declining popularity. Pixels opened a lackluster 42 percent below the $41.51 million debut of 2013's Grown Ups 2. The film performed much more in line with the $23.76 million debut of the Kevin James led Paul Blart: Mall Cop 2 earlier this year (James also stars in Pixels). That comparison is especially underwhelming given the added presence of Sandler, the film's retro video game characters (including PAC-MAN and Donkey Kong) and its advantage of higher priced 3D and IMAX admissions.

Pixels opened with $9.15 million on Friday (which included an estimated $1.5 million from Thursday evening shows), declined 8 percent on Saturday to gross $8.44 million and is estimated to fall 24 percent on Sunday to gross $6.42 million. That places the film's estimated opening weekend to Friday ratio at 2.62 to 1. Pixels received a respectable B rating on CinemaScore, which isn't a great sign, but does suggest that audiences are responding to the film better than critics have. On the brighter side of things, the reported $88 million production budget for Pixels is modest by high-profile summer release standards and the film was off to a relatively stronger start overseas.

Minions wasn't far behind with an estimated third place take of $22.06 million. The blockbuster 3D computer animated spin-off from Universal and Illumination Entertainment was down a sharp 55 percent from last weekend. After a terrific opening weekend performance, Minions has displayed lackluster holding power due in part to mixed word of mouth (especially among adults) and to the massive initial rush out of the film's fanbase during the film's first week of release. With that said, Minions has already grossed $261.58 million in 17 days. That places the film just ahead of the $258.57 million 17-day take of 2013's Despicable Me 2, though it should be reminded that Minions does have an advantage in the comparison as a result of Despicable Me 2 opening on a Wednesday.

Fellow Universal release Trainwreck followed in fourth with an estimated $17.28 million. The critically acclaimed Amy Schumer led comedy from director Judd Apatow was down a solid 43 percent from last weekend. The film's hold this weekend does indicate that the rush out of Schumer's fanbase has led to relatively more initial front-loading than usual for a film from Apatow; but the film is still highly likely to hold up much better going forward thanks to its strong word of mouth and critical reviews. Trainwreck has grossed a very promising $61.53 million in ten days. The film is currently running an impressive 42 percent ahead of the $43.34 million ten-day take of 2009's Julie & Julia (which fell 40 percent in its second weekend to gross $12.06 million) and 7 percent behind the $65.87 million ten-day gross of 2007's Knocked Up (which declined 36 percent to take in $19.64 million).

The Weinstein Company's Southpaw rounded out the weekend's top five with an estimated $16.5 million debut. The Antoine Fuqua directed sports drama starring Jake Gyllenhaal opened slightly ahead of expectations and surprisingly ahead of Paper Towns in this weekend's rankings. Despite mixed critical reviews, Southpaw was off to a nice start this weekend thanks in part to an effective marketing campaign that was aided by the film's soundtrack and buzz surrounding Gyllenhaal's performance. Southpaw opened 25.5 percent ahead of the $13.15 million debut of 2012's End of Watch and 10 percent behind the $18.32 million start of 2005's Cinderella Man.

Southpaw started out with $6.20 million on Friday (which included an estimated $1.2 million from Thursday evening shows), fell 8 percent on Saturday to gross $5.71 million and is estimated to decrease 20 percent on Sunday to gross $4.59 million. That gives the film an estimated opening weekend to Friday ratio of 2.66 to 1. Southpaw received a strong A rating on CinemaScore, which is a strong early sign for the film going forward.

Meanwhile, Fox's Paper Towns was off to a disappointing sixth place start with an estimated $12.5 million. The young adult adaptation starring Nat Wolff and Cara Delevingne opened well below expectations. The goodwill from the success of last year's The Fault in Our Stars (which like Paper Towns, was also adapted from a John Green novel) helped generate high levels of online buzz for Paper Towns in the weeks leading up to its release, but that buzz ultimately failed to transfer over to the box office. In addition to opening 74 percent below the $48.00 million debut of The Fault in Our Stars, Paper Towns opened 20 percent below the $15.68 million start of last year's If I Stay.

On top of the soft opening, Paper Towns was extremely front-loaded this weekend. The film was off to a respectable $6.33 million start on Friday (which included a significant $2.0 million from Thursday night shows), but fell a massive 45 percent on Saturday to gross $3.50 million and is estimated to decline 24 percent on Sunday to take in $2.68 million. That gives the film an estimated opening weekend to Friday ratio of only 1.98 to 1, which obviously isn't a good sign going forward. Paper Towns did receive a solid B+ rating on CinemaScore and carried a reported produced budget of just $12 million.

In other box office news, Universal's Jurassic World moved into third place on the all-time unadjusted domestic list after an estimated $6.85 million eighth place take this weekend. Jurassic World has grossed a massive $623.75 million in 45 days, which places it just ahead of the $623.36 million final domestic gross of 2012's Marvel's The Avengers. 1997's Titanic (with aid from its 2012 re-issue) claims second place on the all-time domestic list with a lifetime unadjusted gross of $658.67 million.

Saturday Update: Sony's Pixels bowed in first place on Friday with $9.2 million. Unfortunately, that falls well short of early summer expectations which had pegged recent nostalgia-driven box office successes to also drive the Adam Sandler-led adaptation of Patrick Jean's innovative short film. Pixels was 37 percent behind the pace of Pacific Rim on opening day, as well as 36 percent below the first Grown Ups' bow and slightly ahead of Battleship's $8.8 million opening day. Word of mouth is heading in the wrong direction as well, claiming a "B" CinemaScore and a 59 percent Flixster user grade this morning (on top of critics' 19 percent Rotten Tomatoes score). The $88 million production budget of the film means a decent overseas performance could carry the pic in the long run, but that remains to be seen. Sony itself is projecting a $25 million opening weekend, which would likely put it in first place.

In second place, Ant-Man was off 68 percent from opening day last week to $7.234 million yesterday. With $88.54 million in the domestic bank through eight days, the pic is trending 8.5 percent ahead of 2008's The Incredible Hulk and 11 percent behind 2011's Captain America: The First Avenger. BoxOffice projects a $23.5 million sophomore weekend.

Minions claimed third place on Friday with $6.7 million, down 54 percent from the same day last week. The prequel's 15-day domestic total stands at $246.2 million, on par with Despicable Me 2's $246.1 million through the same point. Universal is projecting a $22.2 million third frame.

Debuting in fourth place, Paper Towns earned $6.325 million on Friday (including Thursday's early shows). That's slightly below the $6.83 million first day of last August's young adult drama If I Stay, and represents nearly one-quarter of The Fault In Our Stars' $26.06 million first day. The film's low production budget means this is still a win for Fox. Early word of mouth is moderate with a 72 percent Flixster score (Fault had 93 percent one day after; Stay boasted 75 percent), while critics have awarded it a 60 percent Rotten Tomatoes score. BoxOffice projects a $13.9 million debut weekend.

Meanwhile, Trainwreck eased 51 percent from opening day last week to $5.3 million yesterday. That gives the Amy Schumer comedy an eight-day haul of $49.55 million, 10.5 percent ahead of the pace of Bridesmaids and 5.5 percent behind Knocked Up. Universal projects a $16.9 million sophomore frame.

Last but not least, Inside Out added $2.196 million (off 35 percent from last Friday) to bring its domestic take up to $315.2 million as it heads toward a $7.5 million weekend. All the while, Jurassic World tacked on another $2 million on Friday, giving it $618.9 million domestically up to this point as it moves in on surpassing the first Avengers' $623.3 million (likely Sunday, but Monday at the latest). World should take in around $6.7 million this weekend, according to Universal.

Friday Update #2: Sources report that Sony's Pixels is trending for an opening day close to $10 million based on matinee and early evening business. If that holds, the Adam Sandler pic will score an opening around $26 million.

That may or may not be enough to give it first place, though, as Marvel's Ant-Man looks to pull a similar weekend total between $25-30 million.

Friday Update #1: Sources report that Paper Towns started off with $2.0 million from Thursday night shows beginning at 9pm in 2,500 theaters, while Pixels earned $1.5 million from 2,776 locations.