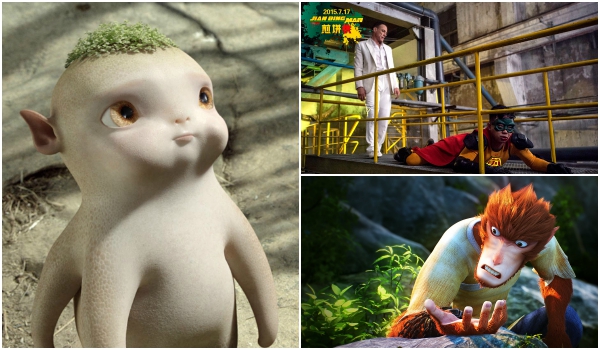 The top three movies from last weekend's record-breaking haul of $183 million had no trouble retaining their spots in the face of weak competition this weekend.

Monster Hunt (捉妖记) continued it reign this weekend, dropping only 37% from last weekend and grabbing nearly half of the market for an additional $51.8 million from ~161,000 showtimes. Early Sunday morning, the live action/3D animated hybrid film passed Lost in Thailand ($201 million) to become the highest-grossing Chinese language film of all-time, and its 12-day est. total of $231.5 million puts Monster Hunt on the brink of passing this summer's Avengers: Age of Ultron as the 3rd highest-grossing film of all-time in China. Based on this weekend's strong hold and the lack of a any major release that could challenge its dominance over the next few weeks, Monster Hunt has a decent shot at topping Transformers 4 ($319 million) and ushering in the era of ￥2 billion Chinese blockbusters.

In second place again this weekend is comedian Da Peng's superhero spoof Jianbing Man (煎饼侠) which dropped 60% for $27.1 million from ~130,000 screenings. Jianbing Man currently holds the 9th position on China's all-time highest grossing domestic film list with a 10-day total of $139.3 million and is on track for a ￥1.1 billion finish ($180 million) which would place it at #5. Jianbing Man also opened stateside this weekend in select cities, but we don't have any box office numbers at this time.

Holding strong in third is Monkey King: Hero Is Back (西游记之大圣归来). The 3D animated adventure that surprised many industry watchers fell just 40% in its 3rd weekend of release, earning $15.6 million from ~68,000 screenings for a 17-day total of $108 million. Monkey King is the highest-grossing animated movie of all-time in China and is a positive sign for local animations moving forward.

Two new releases round out the top five. In fourth place, the romantic-comedy Only You (命中注定), an adaptation of the 1994 chick flick starring Robert Downey Jr. and Marisa Tomei, underperformed with just $7.6 million (including early previews) from ~73,000 screenings. China's consumer class, mostly born after 1990, apparently isn't interested in watching a love story about middle-aged adults.

In fifth place, Seer 5: Rise of Thunder (赛尔号5：雷神崛起) took in a solid $4.6 million from just ~42,000 showtimes over the weekend and has earned $6.6 million since opening Thursday. This is the fifth installment in the Seer franchise based on a popular online game.