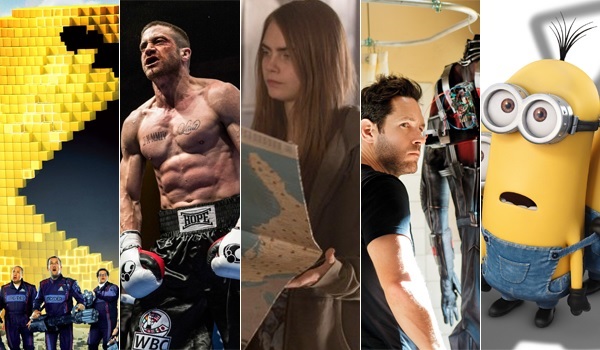 Disney's Ant-Man led the daily box office on Monday with $3.32 million. The Paul Rudd led superhero film from Marvel has topped the daily box office each of the past three days. Ant-Man was down 57 percent from Sunday and down a sizable 48 percent from last Monday. The film continues to perform on the lower end of expectations with a solid $109.54 million eleven-day take. Ant-Man is currently running 10 percent ahead of the $99.70 million eleven-day gross of 2008's The Incredible Hulk and 9 percent behind the $120.86 million eleven-day haul of 2011's Captain America: The First Avenger.

Minions placed in a fairly close second on Monday with $3.09 million. The blockbuster 3D computer animated spin-off from Universal and Illumination Entertainment fell 57 percent from Sunday and 46.5 percent from last Monday. While Minions has been significantly front-loaded thus far, in the bigger picture the film remains a very strong performer with an 18-day take of $265.54 million. That places Minions just behind the $268.60 million 18-day total of 2013's Despicable Me 2.

Sony's Pixels followed closely behind in third with $2.86 million. The Adam Sandler led 3D action comedy was down a solid 56 percent from Sunday's performance. Pixels has grossed a lackluster $26.87 million through four days of release. That places the film a disappointing 42 percent behind the $46.27 million four-day start of 2013's Grown Ups 2 and a modest 7 percent ahead of the $25.02 million four-day take of Paul Blart: Mall Cop 2 earlier this year. Those comparisons are especially underwhelming given that Pixels has the added advantage of higher priced 3D and IMAX admissions.

Universal's Trainwreck claimed fourth place with $2.14 million. The critically acclaimed Amy Schumer led comedy from director Judd Apatow declined 58 percent from Sunday and a solid 39.5 percent from last Monday. Trainwreck has grossed a very promising $63.67 million in eleven days and is highly likely to hold up even better going forward thanks to strong word of mouth. The film is running an impressive 42 percent ahead of the $44.97 million eleven-day take of 2009's Julie & Julia and 7 percent behind the $68.56 million eleven-day gross of 2007's Knocked Up.

The Weinstein Company's Southpaw rounded out Monday's top five with $2.00 million. The Antoine Fuqua directed sports drama starring Jake Gyllenhaal fell 58 percent from Sunday. Southpaw is running slightly ahead of pre-release expectations with a healthy four-day start of $18.70 million. That places the film 30 percent ahead of the $14.42 million four-day gross of 2012's End of Watch. Southpaw may hold up well going forward thanks in part to the film going over better with moviegoers than it has with critics.

Paper Towns took sixth place with $1.81 million. On the heels of this weekend's significantly softer than expected start, Fox's young adult adaptation starring Nat Wolff and Cara Delevingne stabilized nicely on Monday by falling only 35 percent from Sunday. Yesterday's hold strongly suggests that Paper Towns will be relatively stronger on weekdays than on weekends. Paper Towns has grossed $14.46 million in four days, which places it 15 percent behind the $16.95 million four-day take of last year's If I Stay.