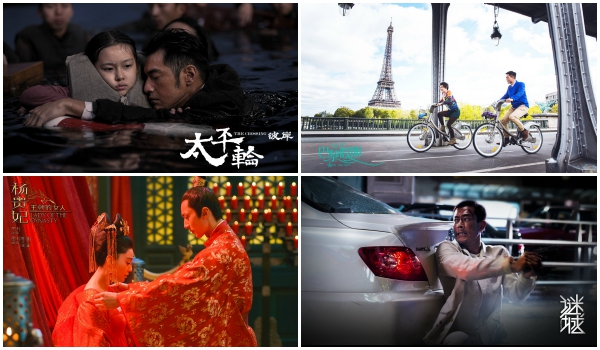 Monster Hunt (捉妖记) will continue its improbable climb to ￥2 billion ($322 million) unimpeded by this week's crop of eight new local releases, and fellow summer blockbusters Jianbing Man (煎饼侠) and Monkey King: Hero Is Back (西游记之大圣归来) should also rest easy without much in the way of audience competition.

This weekend's biggest release in terms of awareness and intent to purchase according to EntGroup's EFMT Index is The Crossing: Part 2 (太平轮：彼岸), the concluding installment in director John Woo's (Face/Off, The Killer) retelling of the sinking of the "Chinese Titanic". Part 1 was released on the Mainland last December to mostly negative reviews calling the story muddled with too many character relationships, and grossed just $32 million on a reported $48 million budget. Even though Hong Kong master director Tsui Hark has been brought in to re-edit this chapter, we don't see many new converts showing up for this dud on opening weekend.

Another Hong Kong action director, Ringo Lam (City on Fire, Full Alert) returns after a 7-year hiatus with Wild City (谜城) opening on Thursday. The film tells the story of a cop-turned-bar owner who unwittingly becomes involved with triads after escorting home a drunken woman. Fans of Lam's previous work as well as stylish Hong Kong action thrillers and residents in the southern cities of Guangdong and Shenzhen may turn up for Wild City, but we don't see this gaining much mainstream traction. Well Go Entertainment will be releasing Wild City in select US and Canadian cities on Friday.

The epic period drama Lady of the Dynasty (王朝的女人-杨贵妃) with superstar Fan Bingbing (X-Men: Days of Future Past) and Leon Lai (Fallen Angels) finally opens Thursday after nearly six years of development and production hell in which the film went through several directors and co-financiers. Despite this, Lady boasts an impressive behind-the-scenes team. Acclaimed director Zhang Yimou (Raise The Red Lantern) was brought on in the latter stages to help director Shu Qi finish the epic Tang Dynasty love story; Emi Wada, Academy Award winning costume designer on Akira Kurosawa's Ran, is crafting the beautiful Tang Dynasty robes worn by the Emperor and his consorts; and Polish composer Zbigniew Preisner, best known for his work with director Krzysztof Kieslowski, is scoring Lady. Lovers of period costume dramas, imperial court intrigue, and fans of the main cast will show up this weekend, but again this film doesn't pose any risk to mainstream hits Monster Hunt, Jianbing Man, and Monkey King.

Other films opening this weekend are Paris Holiday (巴黎假期), Love Will Be Back (等爱归来),The Making of a Man (男人制造), The Little Mermaid: Attack of the Pirates (美人鱼之海盗来袭), and Who in the Pool? (恐怖游泳馆)