Summer Getaway: Interview with the Directors of 'Vacation' 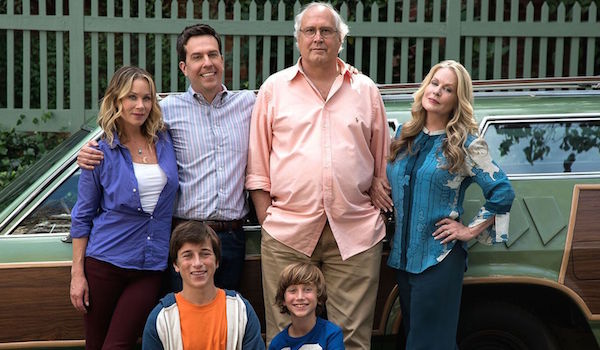 After scoring a hit with their screenplay for Horrible Bosses, writing partners John Francis Daley and Jonathan Goldstein established their reputation as a go-to duo for studio comedies. They teamed up to deliver screenplays for films like The Incredible Burt Wonderstone and Cloudy with a Chance of Meatballs 2 before getting the chance to tackle New Line's long-awaited reboot of Vacation. Daley and Goldstein got the nod to make their feature directing debut after delivering their screenplay for the movie, which stars Ed Helms as Rusty Griswold, the now grown-up son of Chevy Chase's Clark Griswold from the original films, as he travels with his family on a nostalgic road trip to Walley World-the theme park where the original Vacation took place. The filmmakers recently spoke with BoxOffice about bringing their take on Vacation to the big screen.

Do you consider Horrible Bosses the breakthrough project in your careers as filmmakers?

Jonathan Goldstein: Horrible Bosses was our big entry into the world of features. It was a project that had been kicking around for a while when we got involved, and we were really psyched with how it came together-we were so happy with the cast that signed on and how the movie turned out.

John Francis Daley: We had written a couple of things for New Line before Horrible Bosses came to be. What was crazy was that it was put together faster than anything that we had previously worked on, which just goes to show the pace that something gets picked up when people get excited about making a movie. Makes us wonder what the heck they thought about our other movies.

How did you first encounter your latest project, Vacation?

JFD: We were given the chance to write it; New Line wanted to reboot it or make a sequel for a while and were looking for the right people to make it, so they asked us if we'd be interested in it. We saw the inherent risk involved since it's a beloved existing franchise; we knew we had to be careful but were still very interested in taking it on. We pitched ourselves to direct after we finished writing it.

That's always a tough challenge, getting a project like this one and giving it your own tone and style so it doesn't feel like it's factory-made. How did you go about making Vacation your own?

JG: It was important for us going in that it would be a film that could stand on its own without people having to see the original series of movies, but would still pay respects to the original because it's such a comedy classic. Our film introduces the next generation with Ed Helms playing Rusty Griswold all grown up, married, and taking his own family on a trip to Walley World-remembering the trip he took when he was a boy and the character was played by Anthony Michael Hall. He's blocked out all the terrible things that happened on that trip.

You were originally slated for release in October.

JFD: We had always wanted this to be a summer movie: it takes place during the summer, it's a family road-trip movie, and we were just really excited that the studio moved up our release date. We were championing a summer release from the get-go.

JG: These are decisions that are made on a very high level and are usually a result of an early preview screening, in this case in Burbank, and it played so well with the audience-the laughter, excitement, and energy was great. Warner Bros. felt confident enough to move us up to summer against the new Mission: Impossible. What can go wrong?

Is your working relationship any different when you're on set directing as opposed to writing?

JG: Everything we do on set is very collaborative. We've heard that some directors divide what they focus on-some work closer with actors while others are looking more at technical aspects-and while sometimes I wish we could do that, mostly because it would probably be more efficient, we're both more involved in every aspect.

JFD: It would also be a flaming violation of DGA regulations [laughs]. The way we write is always together in the same room, and that's different from a lot of writing teams that go off and do their own drafts separately. We direct in the same way, always throwing ideas at each other. It's easier to know if something works if you have someone else weighing in with their opinion.

JG: Especially in comedy, we've found that if one of us finds something funny but the other doesn't, it's questionable. But if we both think it's funny, we figure it's probably going to seem funny to other people.

JFD: Or we could just be the only two weird people in the world who think it's funny.

Are there advantages to working with your own screenplay?

JG: As writers, we imagine how everything would look when we write it. You have the freedom to create anything. As directors, it's all the more satisfying when you have the idea for something and have the chance to put it up on the screen. In a way there's a greater sense of freedom there. But there are also limitations in that, all of a sudden, all the things you imagined on the page are, in reality, practically impossible to realize. So you really need to navigate what's possible and what isn't. We have a fight sequence near the end of the movie, and in the script we wrote, "They fight." When you show up on set, you need to get a fight choreographer and spend a lot of time in making sure the fight works. Those are the details you need to pay attention to when directing after getting used to simply writing something and letting someone else figure it out.

I'm very interested to see these characters go back to Walley World, but did you ever consider setting it abroad? Europe, Latin America?

JG: We have to save something for the sequel!

JFD: It was New Line's idea to bring back the notion of a road trip, and we thought that if we were to put them back in a car and make them go cross-country, it would not be gratifying unless their final destination was Walley World again. We embraced the fact that it was something Rusty did 30 years ago. We also wanted to have Chevy Chase and Beverly D'Angelo in the movie at some point; it would have been far-fetched to have them in the movie if we had set it in a far-flung destination.

Did you have anyone in mind for any specific role?

JG: We always had Ed Helms in mind for the lead; he's perfectly suited to play the likable, somewhat put-upon dad. There are two sons in the movie, and we had a nationwide search to find the kids. Christina Applegate is on our short list of the funniest women in comedy, and we were very excited to have her on board. The rest was just a process of figuring out the funniest possible people we could get to be in the movie. Chris Hemsworth was a surprise to us; he was suggested to us by his agent and had never really done comedy before. We know him from Thor and he's certainly good looking, but we had no idea what we were going to get-and we couldn't be happier with how damn funny he is. I think he has a big career in comedy ahead of him.