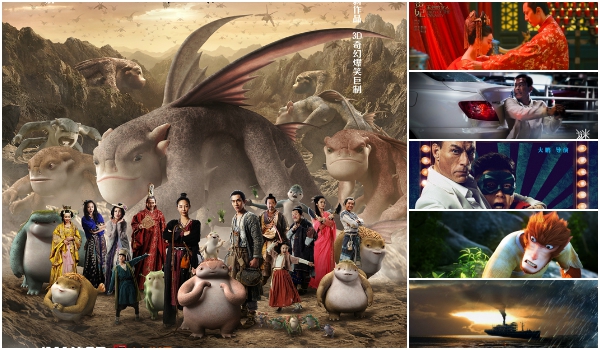 It's already been a monster run for the highest-grossing Chinese movie of all-time and this weekend saw another outstanding hold for Monster Hunt (捉妖记). The live-action/3D animated hybrid film continued to wow both paying moviegoers and box office pundits, dropping just 40% for $31.4 million from ~107,000 showtimes to lift its 18-day total to a staggering $290 million. Despite several high-profile releases, Monster Hunt was able to retain the #1 position and has held the top spot for its entire run and with not much in the way of stiff competition next weekend, the film will easily pass Transformers: Age of Extinction ($319 million) to become the 2nd highest-grossing film of all-time. It remains to be seen whether or not Monster Hunt can challenge Furious 7's $391 million record from April, but its run already proves that Chinese moviegoers will seek out high-quality domestic films in the same way they devour Hollywood blockbusters.

A pair of new releases usurped the second and third spots from Monster Hunt's fellow hits Jianbing Man (煎饼侠) and Monkey King: Hero Is Back (西游记之大圣归来) which fell to fourth and fifth respectively. In second place, Lady of The Dynasty (王朝的女人：王贵妃), a Tang Dynasty epic period drama starring Fan Bingbing, opened strong on Thursday but quickly faded throughout the weekend, earning a 4-day total of $14.8 million from ~95,000 showtimes. Following a similar trend, gritty Hong Kong action flick Wild City (谜城) took in a 4-day total of $14.1 million from ~78,000 showtimes. Both Lady and Wild City kicked off their runs with cheap subsidized tickets from third-party merchants -- their average tickets prices were more than $1 cheaper than the national average -- but neither could sustain momentum over the weekend due to poor word of mouth and lack of mainstream appeal.

In fourth, Jianbing Man grabbed $8.8 million (-68%) from ~47,000 screenings. The superhero spoof that lampoons Mainland celebrity culture has grossed $163.9 million in 17 days and is just the sixth domestic film ever to crack ￥1 billion ($161 million). Rounding out the top five, Monkey King: Hero Is Back grossed $8.1 million (-48%) and has earned $125.7 million in 24 days, setting a new record for the highest-grossing animated movie in China box office history.

And in a disappointing sixth place, John Woo's epic (and expensive) The Crossing: Part 2 (太平轮：彼岸) couldn't recover from the negativity that sank Part 1, grossing just $5 million in 4 days from ~51,000 showtimes.

The rest of this weekend's top 10 can be found below with data from China's EntGroup.