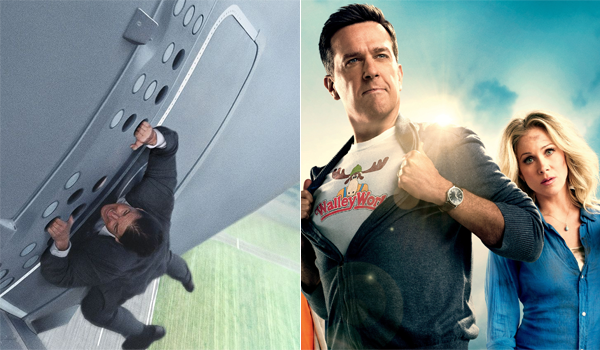 Rogue Nation opened with $20.30 million on Friday (which included an estimated $4.0 million from Thursday evening shows), fell a slim 3 percent on Saturday to gross $19.65 million and declined 21 percent on Sunday to gross $15.57 million. That placed the film's opening weekend to Friday ratio at a solid 2.73 to 1. Early word of mouth appears to be very strong for Rogue Nation, as the film received an A- rating on CinemaScore and currently boasts a 92 percent audience score on Flixster. With that in mind, Mission: Impossible - Rogue Nation is likely to hold up relatively well going forward, though the film will also face significant competition over the next two weeks from Fox's Fantastic Four, Universal's Straight Outta Compton and Warner's The Man from U.N.C.L.E.

Warner's Vacation debuted in a distant second place this weekend with $14.68 million. The comedy franchise re-launch starring Ed Helms and Christina Applegate has grossed $21.00 million in five days since opening on Wednesday. That is below the already scaled back expectations for the film. Vacation is running a distant 45 percent behind the $37.91 million five-day launch of 2013's We're the Millers. Instead, Vacation performed much more in line with the $19.10 million five-day start of 2012's Hope Springs. Poor critical reviews certainly didn't help matters for Vacation and the film's R rating appears to have limited some of its potential with younger moviegoers as 64 percent of the film's audience was 25 years and older. Vacation skewed slightly towards female moviegoers (53 percent).

On a positive note, Vacation was quite back-loaded towards the weekend as it registered a five-day to three-day weekend ratio of 1.43 to 1. That suggests that the film may be naturally back-loaded going forward. Over the three-day frame, Vacation had an opening weekend to Friday ratio of 3.25 to 1 (the film took in $4.52 million on Friday, increased 28 percent on Saturday to gross $5.80 million and decreased 25 percent on Sunday to gross $4.36 million). Vacation may also be aided by the relative lack of new comedies arriving in the marketplace throughout the rest of August. On the other hand, the film's modest B rating on CinemaScore isn't the most encouraging early sign, though it does suggest that the film is going over better with moviegoers than it has with critics.

It was a close race for third place this weekend between Ant-Man and Minions. Disney's Ant-Man ended up on top with $12.80 million. The Paul Rudd led 3D superhero film from Marvel was down a sizable 49 percent from last weekend, as it clearly took a direct hit from the arrival of Mission: Impossible - Rogue Nation in the marketplace. Ant-Man has grossed a solid $132.33 million through 17 days of release. That places the film just 8 percent behind the $143.20 million 17-day gross of 2011's Captain America: The First Avenger.

Minions placed in fourth with $12.39 million. The 3D computer animated prequel from Universal and Illumination Entertainment trailed Ant-Man by just $415,269 for the frame. Minions was down a significant 46 percent from last weekend, as the film continues to feel the effect of mixed word of mouth (especially among adults). With that said, Minions has grossed an impressive $287.58 million in 24 days. That places the film 3 percent behind the $295.26 million 24-day take of 2013's Despicable Me 2.

Sony's Pixels rounded out the weekend's top five with $10.50 million. The Adam Sandler led 3D action comedy fell a sharp 56 percent from last weekend. The film's percentage hold was lackluster, especially on the heels of last weekend's much softer than expected debut. With a ten-day gross of $45.71 million, Pixels is running a disappointing 42 percent behind the $79.39 million ten-day gross of 2013's Grown Ups 2 and just ahead of the $44.56 million ten-day take of 2012's Battleship.

Trainwreck followed in sixth with $9.61 million. The critically acclaimed Amy Schumer led comedy from director Judd Apatow was down a respectable 44 percent. While Trainwreck has already registered a total gross to opening weekend ratio of 2.65 to 1, the film is also displaying more front-loading than is often usual for a film from Apatow; likely a result of Schumer's fanbase having rushed out to see the film. Trainwreck has grossed a strong $79.61 million in 17 days, which places it an impressive 35 percent ahead of the $59.09 million 17-day gross of 2009's Julie & Julia.

The Weinstein Company's Southpaw landed in seventh place with $7.62 million. The Jake Gyllenhaal led sports drama was down a sharp 54 percent, which does take a bit of the luster off of last weekend's stronger than expected debut. Even with this weekend's decline, Southpaw is still off to a solid ten-day start of $31.68 million. The film is currently running 22 percent ahead of the $25.98 million ten-day gross of 2012's End of Watch.