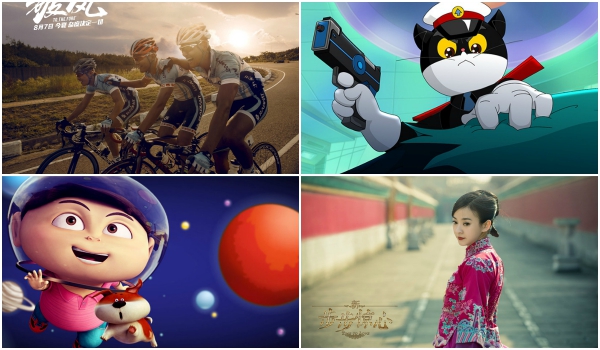 This week sees an astonishing 13 new films enter Chinese cinemas, but with only 2 or 3 capable of stealing showtimes away from Monster Hunt, the record-breaking blockbuster looks to continue its run at the top of the Chinese box office for a fourth straight weekend. (At writing, Monster Hunt has grossed $302M).

Monster Hunt's biggest competitor this week according to EntGroup's EFMT Index is To The Fore (破风), a sports drama from Hong Kong director Dante Lam set in the cutthroat world of professional road cycling. Lam teams up again with actor Eddie Peng; they last worked together on 2013's mixed martial arts drama Unbeatable which grossed $19 million on the Mainland. The film also stars Korean pop-star Choi Siwon and Chinese-Canadian actor Shawn Dou who along with Peng could attract lots of young female moviegoers. Even though To The Fore contains sports elements that would otherwise make it a rather niche film, the cutthroat drama and backstabbing place it more in line with films young Chinese audiences like to watch. Therefore, we see To The Fore exceeding Unbeatable's box office performance, perhaps reaching as much as $50 million by the end of its run. To The Fore is also being released in select US and Canadian cities on Saturday through Magnum Films.

Aimed at a similar demographic, Time To Love (新步步惊心) is adapted from a popular 2011 Hunan television series. Here's the premise: a young modern woman fed up with her white collar job is accidentally sent back in time and becomes a Qing Dynasty Princess. A similarly-themed TV show-turned film called The Palace (宫锁城乡) was released in 2013 and grossed only $9 million. Despite rabid fans of the TV show showing up on opening day, we expect word of mouth to hurt this ridiculous movie and it will disappear overnight with just $5 million.

Local animation has been in the spotlight this summer with Monkey King: Hero Is Back smashing records left and right. Two new Chinese animated films enter cinemas this weekend trying to steal some of Monkey's attention, but we anticipate the King will reign supreme for another frame. Kwai Boo: Crazy Space Adventure (桂宝之爆笑闯宇宙) is a big screen adaptation of China's popular Crazy Kwai Boo animated TV series - think a Chinese Jimmy Neutron. 20th Century Fox has invested an undisclosed sum into Kwai Boo: Crazy Space Adventure, marking the first ever investment by a Hollywood player in Chinese animation. Mr. Black - Green Star (黑猫警长之翡翠之星) adapted from a popular ‘80s animation about a black cat riding around on his motorcycle stopping bad guys, would like to capitalize on the nostalgia that catapulted Stand By Me Doraemon to an impressive $88 million in May, but we don't see it getting anywhere near that.

The other 9 (!!) films opening this weekend are The Snow Queen (Russia), Love in the Office (一路向前), Sword of Hope (轩辕剑传奇), Legend of Didao (小西天狄道传奇), The Spirit of the Swords (情剑), Love at First (爱之初体验), The Best Love (我爸比我小四岁), Where'd The Time Go (时间都去哪了), and Red Mansion (红髅).