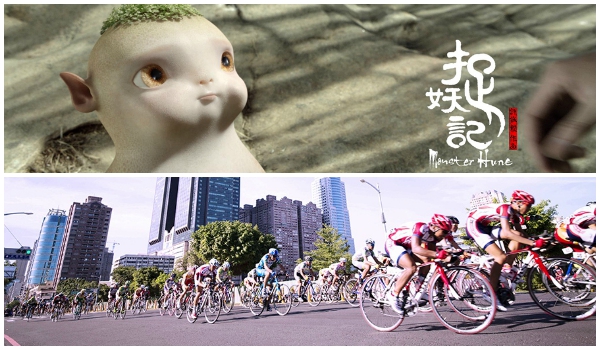 Monster Hunt continued to slay the competition, sitting atop the box office for a 4th consecutive weekend with $18.8 million (-40%) from ~95,000 showtimes. The live-action/3D animated hybrid family film has grossed $330 million in 25 days of release and surpassed Transformers: Age of Extinction ($319 million) on Saturday to become the 2nd highest-grossing film of all-time in China. Monster Hunt was also granted a release extension and will remain in theaters until September 16 to challenge Furious 7's $391 million record from April, but next weekend's heavyweight Go Away, Mr. Tumor! (滚蛋吧！肿瘤君) -- which grossed $2 million on Saturday previews to place #9 for the weekend -- will steal away a large percentage of its showtimes.

It was a close race for 3rd-5th place this weekend as Monkey King: Hero Is Back, Jianbing Man, and new animation Mr. Black: Green Star (黑猫警长之翡翠之星) were separated by just $400K. Monkey King leapfrogged back into the 3rd spot with $5.5 million (-32%) from ~33,000 screenings for a 31-day total of $137 million. The highest-grossing animated film in China's history also received a release extension until September 9.

Jianbing Man also held well, dropping just 41% for $5.2 million from ~36,000 showtimes. The superhero spoof is the 5th highest-grossing domestic film of all-time with $177 million after its fourth weekend of release.

Rounding out the top five, Mr. Black: Green Star posted a solid $5.1 million from ~55,000 screenings and is up to $6.1 million including last weekend's previews.