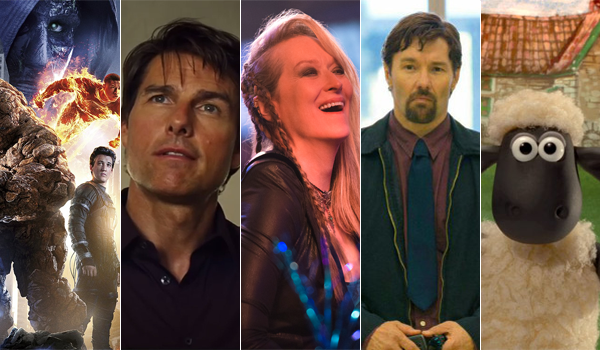 Mission: Impossible - Rogue Nation was able to hold off Fantastic Four this weekend to remain in first place at the box office. Paramount's Rogue Nation led the way with $28.50 million, which represented a very respectable 49 percent decline from last weekend's debut. In the process, the fifth installment of the Tom Cruise led action franchise surpassed the $100 million domestic mark this weekend. Rogue Nation has grossed $107.76 million in ten days, as the film continues to perform in line with pre-release expectations. The film is currently running 27 percent ahead of the $85.10 million ten-day take of 2006's Mission: Impossible III (which fell 48 percent in its second weekend to gross $25.01 million) and 2 percent ahead of the $105.21 million ten-day gross of 2011's Rise of the Planet of the Apes (which fell 49 percent in its second weekend to gross $27.83 million). Mission: Impossible - Rogue Nation is likely to hold up well throughout the rest of August, thanks in part to strong word of mouth and in part to the limited amount of new competition it will be facing throughout the second half of the month.

Fantastic Four was off to a very weak second place start this weekend with $25.69 million. Fox's relaunch attempt of the Marvel superhero franchise didn't come anywhere close to expectations, which had tended to range from $40 million to $50 million heading into the weekend. Poor critical reviews and toxic early word of mouth that spread like wildfire as the weekend went on both clearly took a major toll on the film. In addition to the poor reception to the film, the decision to aim Fantastic Four heavily towards the young adult audience appears to have backfired as well. Fantastic Four opened a disappointing 56 percent below the $58.05 million debut of 2007's Fantastic Four: Rise of the Silver Surfer and only outpaced the $22.00 million start of 2012's Chronicle (which was also directed by Josh Trank) by 17 percent.

Fantastic Four opened with $11.28 million on Friday (which included an estimated $2.7 million from Thursday evening shows), fell a troubling 24 percent on Saturday to gross $8.58 million and fell 32 percent on Sunday to gross $5.83 million. That gave the film an opening weekend to Friday ratio of only 2.28 to 1, which obviously isn't a good sign going forward. As further evidence of just how toxic word early word of mouth for the film is, Fantastic Four earned a poor C- rating on CinemaScore and has a current Flixster audience score of just 24 percent. Given the poor reaction to the film, a short theatrical life span for Fantastic Four already appears to be set in stone.

The news was far more promising for STX Entertainment's The Gift, as the new distributor's first release was off to a nice third place start of $11.85 million. The Joel Edgerton directed thriller starring Jason Bateman, Rebecca Hall and Edgerton outpaced its modest expectations. The Gift was helped out by strong critical reviews and likely also received a bit of a bump from serving as an alternative choice to moviegoers who ultimately passed on Fantastic Four (especially as the weekend went on). The Gift opened nearly on par with the $12.31 million start of The Giver last August and will hope to duplicate the strong holding power of that film going forward.

The Gift took in $4.12 million on Friday (which included an estimated Thursday night start of just $0.59 million), increased an encouraging 10 percent on Saturday to gross $4.52 million and decreased 29 percent on Sunday to gross $3.21 million. That placed the film's opening weekend to Friday ratio at 2.88 to 1, which is a good sign going forward. The film's B rating on CinemaScore is also a positive early sign, especially for a thriller. Making this weekend's start even more impressive is that the reported production budget for The Gift was only $5 million.

Warner's Vacation took fourth place with $8.96 million. The comedy franchise re-launch starring Ed Helms and Christina Applegate was down a solid 39 percent from last weekend. Despite this weekend's hold, Vacation is still running significantly below expectations with a twelve-day start of $37.14 million. That places the film an underwhelming 18 percent behind the $45.06 million twelve-day take of last year's Let's Be Cops.

Ant-Man rounded out the weekend's top five with $7.91 million. The Paul Rudd led 3D superhero film from Disney and Marvel was down a very solid 38 percent, as it also benefited from serving as an alternative choice to Fantastic Four this weekend. Thanks in part to solid holding power thus far, Ant-Man has grossed $147.52 million in 24 days. Ant-Man is now running just 6 percent behind the $156.97 million 24-day gross of 2011's Captain America: The First Avenger.

In other box office news, Universal's Minions surpassed the $300 million domestic milestone this weekend after finishing in sixth place for the frame with $7.45 million. The blockbuster 3D computer animated prequel from Illumination Entertainment stabilized a bit this weekend, as it was down 40 percent from last weekend. Minions has grossed an impressive $302.80 million in 31 days.

Sony's Ricki and the Flash debuted in seventh with $6.61 million. The comedy drama starring Meryl Streep opened slightly below its already modest expectations and was off to a lackluster start by Streep's box office standards. However, the film's opening weekend performance was deflated a bit by the decision to launch the film in a modest 1,603 locations. In an attempt to help the film's holding power going forward, Ricki and the Flash will be receiving a significant expansion next weekend. Streep's films also have a history of displaying strong holding power. Ricki and the Flash received a solid B rating on CinemaScore. It should also be noted that the film's reported production budget was just $18 million.

The weekend's other new wide release, Shaun the Sheep Movie, opened softly with an eleventh place take of $4.04 million. Despite strong critical reviews, the stop-motion animated film from Lionsgate and Aardman Animations was unable to draw in family audiences this weekend. Since its debut on Wednesday Shaun the Sheep Movie has grossed $5.61 million in five days. That places the film 54 percent behind the $12.27 million five-day take of 2012's The Pirates: Band of Misfits (which opened on a Friday). Shaun the Sheep Movie will hope to receive a boost going forward from its strong reviews and from the lack of new family fare entering the marketplace in the near future. The film also received an encouraging B+ rating on CinemaScore.