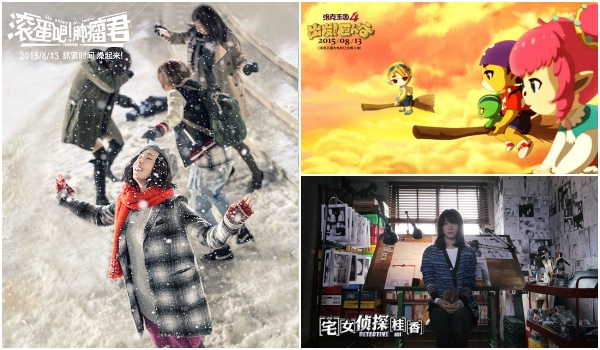 Monster Hunt (est. $334M) and its fellow summer blockbusters Monkey King: Hero Is Back (est. $139M) and Jianbing Man (est. $178M) propelled China’s box office to a new monthly record of $882M in July and a new weekend record of $183M from July 17-July 19. Since that scorching weekend, box office receipts have tumbled week after week, hitting a two-month low this past frame. Meanwhile, Monster Hunt’s Wuba, that radish-shaped CGI blob featured on the film posters, has held onto his crown for four straight weekends with little-to-no competition, sweeping away Only You, Lady of the Dynasty, and To The Fore in quick succession. This weekend however will see the inspirational comedy Go Away, Mr Tumor! (滚蛋吧！肿瘤君) knock Wuba off his perch and re-energize China’s summer box office.

The weekend’s biggest release according to EntGroup’s EFMT Index in terms of awareness, intent to purchase and word of mouth, Go Away, Mr Tumor! is based on a series of comic strips written by illustrator Xiang Yao (pseudonym Xiong Dun) in 2011 as she battled non-Hodgkin’s lymphoma from her hospital bed. She ended up selling more than a million copies, and her work went on to inspire millions of people with its message of optimism and courage. Unfortunately, Xiong Dun passed away from her illness in late 2012 at the young age of 30.

Bai Baihe (also in Monster Hunt) plays Xiong Dun in the film adaptation of Go Away, Mr. Tumor! and director Han Yan recounts her life story through dreamscapes meant to represent the illustrator's vivid imagination; see the trailer below to get an idea of what we mean. Early reactions have been very positive calling the film heartbreakingly funny and Ms. Bai’s best performance since her debut in Love Is Not Blind ($56M). The film grossed $2M from sold-out Saturday night previews and we expect its uplifting theme to strike a chord with Mainland filmgoers, earning $150M+ by the end of its run. Mr. Tumor's box office total will also benefit from premium-priced IMAX ticket sales.

China Lion will be releasing Go Away, Mr. Tumor! in select US and Canadian cities on Friday, August 14.