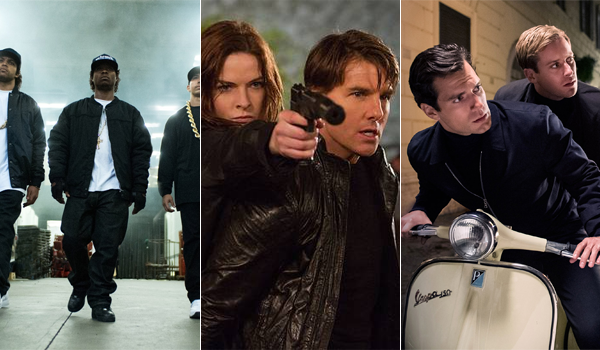 Universal's Straight Outta Compton took in $7.28 million on Tuesday to easily lead the daily box office for a fifth straight day. The modestly budgeted F. Gary Gray directed N.W.A biopic was down 2 percent from Monday. That represented the day's poorest daily percentage hold among wide releases, but that was quite understandable given the size of the film's grosses this week and its excellent daily holds on both Sunday and Monday. In the bigger picture Straight Outta Compton continues to impress in a big way with a five-day gross of $74.94 million. That places the film 48 percent ahead of the $50.73 million five-day start of last year's Ride Along and 24 percent ahead of the $60.29 million five-day take of 2002's 8 Mile.

Warner's The Man from U.N.C.L.E. grossed $1.94 million to remain in third place. The Guy Ritchie directed spy comedy starring Henry Cavill and Armie Hammer was up a healthy 37.5 percent over Monday. However, The Man from U.N.C.L.E. is still performing below pre-release expectations with a soft five-day start of $16.77 million. The film is currently running 13 percent behind the $19.32 million five-day take of last year's Jack Ryan: Shadow Recruit.

Fantastic Four continued to claim fourth place with $1.28 million. Fox's superhero franchise re-launch attempt was up 33 percent from Monday, but still down a sharp 56 percent from last Tuesday. Fantastic Four has only managed $44.37 million in twelve days. That places the film a very disappointing 56.5 percent behind the $102.05 million twelve-day gross of 2007's Fantastic Four: Rise of the Silver Surfer.

Minions continued to display its Tuesday strength with a fifth place take of $1.07 million. The 3D computer animated blockbuster from Universal and Illumination Entertainment was up 45 percent over Monday and down 42 percent from last Tuesday. Minions is the fifth highest grossing release of 2015 so far domestically with a 40-day gross of $314.72 million.

STX Entertainment's The Gift was down one spot from Monday to land in sixth with $1.02 million. The low budget Joel Edgerton directed thriller increased 34 percent over Monday and decreased a solid 41.5 percent from last Tuesday. The twelve-day total for The Gift stands at a stronger than expected $25.36 million.