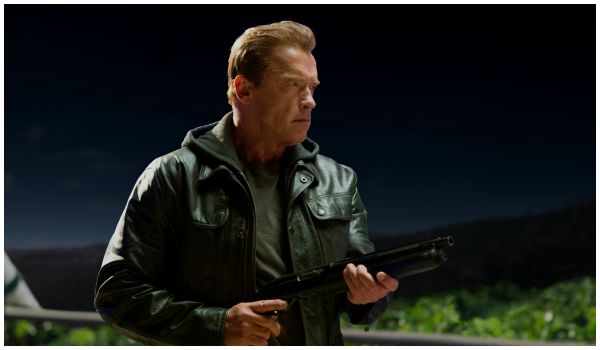 China's State Administration of Radio, Film, and Television's (SARFT) nearly two month-long unofficial moratorium on Hollywood releases came to an end midnight Sunday with the opening of Terminator: Genisys (终结者：创世纪). Mainland audiences were clearly clamoring for something new as this summer has been dominated by blockbusters Monster Hunt (捉妖记), Monkey King: Hero is Back (西游记之大圣归来), and Jianbing Man (煎饼侠) leading the market for nearly 40 days. Sure enough, the combination of fan favorite Arnold Schwarzenegger and his last-minute publicity tour and the dearth of big-budget Hollywood fare brought Chinese fans out in droves on Sunday with Genisys earning $26.0 million on opening day including $2.0 million from midnight screenings. That's the 4th largest opening day gross ever in China behind Transformers 4 ($30M), Avengers 2 ($33M), and Furious 7 ($63M).

Genisys bowed with nearly 49,000 showtimes with a higher-than-average ticket price of ￥36 ($5.62) due to premium priced IMAX and 3D tickets. Average attendance was an impressive 65 people per screening.

Early estimates are in for Monday's box office with Genisys falling 60% with $10.5 million. In comparison, Furious 7 which also opened on a Sunday dropped 54% on its first Monday. Genisys looks to be significantly more front loaded than Furious and less of an "event movie", and with average word of mouth kicking in, the film looks on track to gross between $100M-$125M. This upcoming weekend will tell us more.

In second place, last weekend's champ Go Away, Mr. Tumor (滚蛋吧！肿瘤君) held well with $12.9 million (-43%) for an 11-day total of $65.7 million. The inspirational comedy's strong second weekend performance is most likely due to last weekend's Tianjin explosion which depressed the overall market. Mr. Tumor's marketing campaign came to a halt and Chinese moviegoers avoided entertainment activities across the country.

In third place, Bride Wars (新娘大作战), a remake of 20th Century Fox's romantic comedy, snapped up $9 million. The film starring Angelababy and Ni Ni took advantage of China's Valentine's Day 七夕节 and opened in the top spot on Thursday with $14.4 million. However, it dropped significantly over the weekend and will fade very quickly.

Summer blockbusters Monster Hunt and Monkey King took the fourth and fifth position respectively this frame. Monster Hunt prowled to $7 million (-44%) and has grossed $363.2 million in 39 days. With twenty more days in theaters thanks to a release extension, it is looking more and more likely the domestic family film will surpass Furious 7's $391 million to become the highest-grossing film of all-time in China.

Monkey King fell just 32% from last weekend for $2.4 million and a 45-day total of $146 million. It is the highest-grossing animated film of all-time in China. 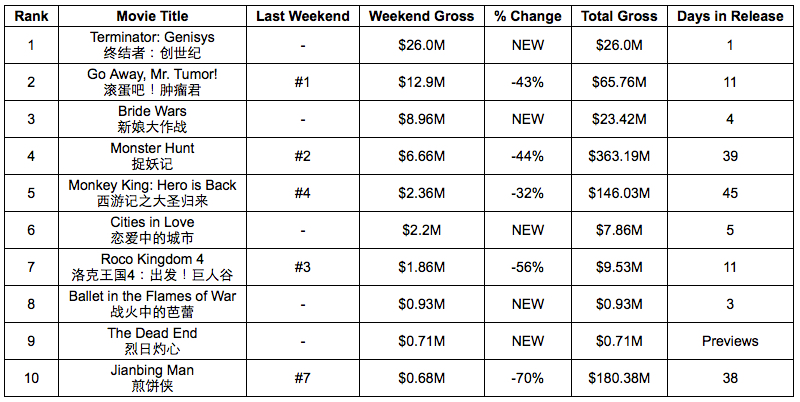