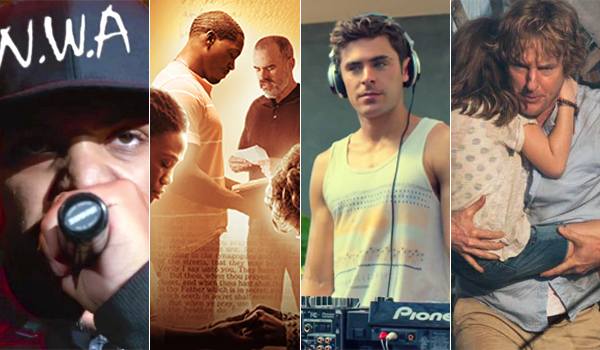 Sony's War Room was off to a very nice start this weekend with an estimated second place debut of $11.0 million. The low-budget Kendrick Brothers produced faith based film from TriStar and AFFIRM Films exceeded its modest expectations heading into the weekend. War Room opened 61 percent stronger than the $6.84 million debut of 2008's Fireproof and 21 percent ahead of the $9.11 million start of 2011's Courageous. Making the film's performance even more impressive was that it was only playing in 1,135 locations this weekend. That gave War Room a strong per-location average of $9,692 for the frame. War Room was aided by an effective grass-roots marketing campaign and by the pre-established fanbase for the Kendrick Brothers. Previous Kendrick Brothers films Fireproof and Courageous both displayed strong holding power during their respective runs. War Room will likely display strong holding power of its own going forward, especially given its A+ rating on CinemaScore.

War Room opened with $4.05 million on Friday (which included an estimated $600,000 from evening shows on Thursday), declined a slim 4 percent on Saturday to gross $3.89 million and is estimated to fall 21 percent on Sunday to take in $3.07 million. That places the film's estimated opening weekend to Friday ratio at 2.72 to 1. The audience breakdown for War Room skewed towards female moviegoers (60 percent) and heavily towards moviegoers over the age of 25 (85 percent).

It's a very close race for third place this weekend as Mission: Impossible - Rogue Nation and No Escape are essentially tied based on studio estimates. With only $12,000 separating the weekend estimates of the two films, either could claim third place when actuals are released tomorrow.

Mission: Impossible - Rogue Nation continued to hold up well with an estimated $8.30 million. The fifth installment of the Tom Cruise led blockbuster franchise from Paramount was down just 27.5 percent from last weekend. Thanks in part to strong holding power throughout its run, Rogue Nation has grossed a very healthy $170.39 million through 31 days of release. That places Rogue Nation 6 percent ahead of the $160.14 million 31-day take of 2011's Rise of the Planet of the Apes. Expect Mission: Impossible - Rogue Nation to hold up very well over the upcoming Labor Day holiday weekend frame.

The Weinstein Company's No Escape debuted with an estimated $8.29 million. The action thriller starring Owen Wilson, Pierce Brosnan and Lake Bell opened in line with its modest pre-release expectations. Since its debut on Wednesday, No Escape has grossed $10.35 million in its first five days of release. That gives the film an estimated five-day to three-day weekend ratio of 1.25 to 1 and places the film 8 percent ahead of the $9.60 million five-day start of last year's Pierce Brosnan led The November Man. While No Escape received mixed reviews from critics, the film appears to be going over better with moviegoers as it received a solid B+ rating on CinemaScore. No Escape will hope to hold up well next weekend with the aid of both good word of mouth and the Labor Day holiday.

Upon receiving a re-expansion this weekend that included a return to IMAX locations, Jurassic World took ninth place with an estimated $3.12 million. The 3D blockbuster sequel from Universal expanded into an additional 665 locations this weekend and was up 229 percent over last weekend. Without taking into account ticket price inflation, Jurassic World remains the third highest grossing film of all-time domestically with a current total gross of $643.09 million.

Meanwhile, Warner's We Are Your Friends was off to an anemic start with an estimated $1.80 million. That placed the low-budget Zac Efron led drama all the way down in thirteenth place this weekend. We Are Your Friends obviously opened below expectations and potential for the film was ultimately limited by the film's low-profile advertising push. The film registered a weak per-location average of $772 from 2,333 locations and on top of everything else received a soft C+ rating on CinemaScore. We Are Your Friends debuted 79 percent below the $8.74 million start of last year's That Awkward Moment. We Are Your Friends certainly marks a poor first post-Neighbors performance for Efron, but the actor is likely to rebound in a big way next year with Dirty Grandpa, Neighbors 2 and Mike & Dave Need Wedding Dates all scheduled to open in 2016.

Saturday Update: Making a strong debut in first place yesterday was Sony's faith-based film War Room with a healthy $3.875 million opening day from just 1,135 theaters. That easily bests Do You Believe's $1.2 million opening day earlier this year and marks the best debut for a faith-based film so far this year. War Room's first day also bested the $3.1 million opening of 2011's Courageous as well as the $2.3 million first day of 2008's Fireproof, both pics from War Room filmmakers Alex and Stephen Kendrick. The strong grassroots marketing campaign -- focused largely on churches throughout the U.S. -- has certainly paid off for Sony and the modestly $3.5 million budgeted film. Early word of mouth among the target audience is very positive with an 88 percent Flixster score and an "A+" CinemaScore. BoxOffice projects an opening weekend around $10.5 million, which would give the Kendricks their best debut yet.

Universal reports that Straight Outta Compton slipped to second place after a 14-day reign in first with another $3.83 million on Friday -- down 54 percent from the same day last week. The biopic has now tallied an impressive $124.7 million domestically as strong word of mouth continues to propel it here at the end of summer. BoxOffice is projecting a $12.3 million third weekend atop the market.

No Escape claimed third place yesterday with $2.44 million. That gives the Weinstein release a three-day tally of $4.5 million, putting it 15 percent ahead of the pace of last year's The November Man. For the weekend, BoxOffice is projecting a $7.2 million frame, which would give it an overall five-day opening of $9.26 million.

In fourth place, Mission: Impossible - Rogue Nation added another $2.18 million on Friday, down just 35 percent from the same day last week. The fifth installment in the venerable Tom Cruise action series has amassed $164.3 million domestically through 29 days of release as it continues to exceed the pace of 2011's Rise of the Planet of the Apes. BoxOffice projects a $7.5 million weekend.

Sinister 2 filled out the top five on Friday, falling 70 percent from its opening day last week to $1.39 million yesterday. That gives the supernatural horror sequel an eight-day domestic sum of $15.25 million as it continues to sharply trail the pace of its predecessor. BoxOffice is projecting a $4.3 million sophomore frame.

Meanwhile, Jurassic World added $787,000 yesterday as part of its re-expansion back into 1,239 theaters (including IMAX and other premium formats). That brings the mega-blockbuster's domestic take up to $640.75 million through Friday. Look for a weekend figure around $2.8 million.

Lastly, We Are Your Friends posted a weak $725,000 opening day. Unfortunately, that's a whopping 82 percent lower than the first day take of fellow Zac Efron pic That Awkward Moment in January 2014. Warner Bros. reports the movie landed a concerning "C+" CinemaScore, while online word of mouth (50 percent on Flixster) and critics (42 percent on Rotten Tomatoes) are likewise heading south. BoxOffice is projecting a $1.9 million opening weekend.

Check BoxOffice on Sunday for updated weekend estimates from the studios.

Friday Update #2: According to sources, this is how the weekend is likely to play out:

Friday Update #1: Warner Bros. reports that We Are Your Friends got started with an underwhelming $175,000 in Thursday night pre-shows. Unfortunately, that falls short of fellow Zac Efron-led That Awkward Moment, which pulled $250,000 in early shows back in January 2014. The latter flick went on to tally $8.7 million for the weekend, a figure which looks unattainable at this rate given WAYF should have still been able to benefit from not all schools being off summer vacation just yet.

Meanwhile, War Room took in a solid $600,000 from early shows last night. The faith-based film is hoping to ride a strong grassroots marketing campaign in the vein of the filmmakers' past successes Fireproof and Courageous.

No Escape also continues its debut frame after opening Wednesday, while Straight Outta Compton is expected to easily win its third straight weekend.

Tags: north-america, We Are Your Friends, War Room, No Escape, Straight Outta Compton