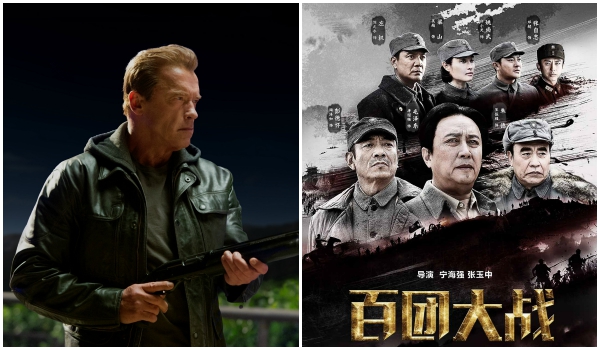 Terminator: Genisys is back in the top spot at the international box office again thanks to China where the 5th installment in the Terminator series grossed $23.4 million (-12%) in its first full weekend of release. Paramount Pictures’ sci-fi film has grossed $82.8 million in the Middle Kingdom, helping lift the overseas total to $320.1 million and the global haul to $409.484 million. Genisys still has the three-day Victory day holiday next week before fellow Paramount Pictures blockbuster Mission: Impossible opens in China.

China also has the 2nd highest-grossing film overseas this weekend with the war movie The Hundred Regiments Offensive which earned a solid $21.75 million on its opening weekend including 3 days of previews. The state-sponsored film is intended to coincide with the 70th Anniversary of the Allied victory over Japan in World War II. A government directive was leaked early in the week ordering movie theater chains to hit box office revenue quotas for the film and as motivation the theaters can keep 100% of the profits. The directive runs through next week's Victory Day Holiday after which normal revenue sharing will return.

Now just the third animated film to join the billion dollar club, Minions continued its global dominance with the highest opening weekend ever for an animated film in Italy ($8.5M) and grossed $14.9 million (+70%) total from 60 overseas territories. The Universal Pictures and Illumination Entertainment animation has earned $694.1 million overseas and $1.01891 billion worldwide. Minions is currently the third highest-grossing animated film both internationally and globally with China still to open on September 13.

Disney/Pixar’s Inside Out continues to chug along overseas, posting $10.9 million (+2%) this frame from 35 territories. The original animation is up to $371.1 million at the international box office and $715.625 million worldwide. Inside Out posted solid openings in Denmark (best opening for a non-sequel Pixar release), Finland, Sweden, and Singapore (2nd best opening for a Disney/Pixar release) but Disney didn’t provide concrete numbers. This film has opened in 84% of its final international marketplace with Greece opening next weekend, Italy on September 16 and Germany on October 1. China’s release date is still not confirmed.

Ted 2 crossed the century mark at the international box office yesterday with $9.3 million (+310%) from 45 territories giving the Universal sequel $109 million total from overseas markets. The film opened in 2nd place in Japan with $4.7 million and in 1st place in Mexico with $1.8 million. Ted 2 has grossed $190.2 million worldwide in an underwhelming effort compared to its predecessor’s $550 million total. Its final territory Indonesia bows September 9.

20th Century Fox’s bomb Fantastic Four generated only $6.8 million from 65 overseas markets this frame. The superhero film has grossed $93.5 million overseas and just $146.2 million worldwide. It opens in Italy on September 10 and in Japan on October 9.

Straight Outta Compton had its first major overseas openings this weekend and grossed $6.5 million from 8 territories. Its early international total is $6.8 million for a worldwide cume of $140.9 million. The NWA biopic opened #1 in the UK/Ireland with $3.9 million, Germany with $2.2 million, Germany/Switzerland with $290K and Iceland with $46K. Austria opened #3 with $87K. Next weekend, Compton comes to Australia, Israel, the Netherlands, New Zealand, and Poland.

Jurassic World is inching closer to $1 billion overseas, roaring to another $3.9 million (-32%) from 35 territories this frame. Universal’s global blockbuster has earned $993.6 million overseas and a staggering $1.637 billion worldwide. Jurassic took the top spot again in Japan this weekend with $3.4 million and a 23-day total of $57 million.