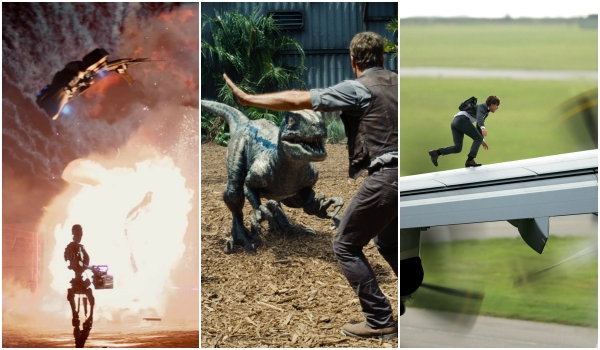 Terminator: Genisys earned $11.5 million (-51%) from 7 markets this weekend, the lion’s share again coming from China which grossed $11.4 million and earned its 3rd straight weekend victory. Genisys has made $109 million on the Mainland, which is nearly one-third of its $346.3 million overseas cume and exactly one-quarter of the $435.92 million worldwide total. Genisys will end its China run with $120 million as Mission: Impossible - Rogue Nation opens on Tuesday and will steal most of Arnold’s screens.

Hitman: Agent 47 brought in $11.37 million from 71 total territories. The action film has grossed $43.2 million overseas and $62.9 million globally. Russia and Venezuela both had solid openings with Russia taking the top spot with $2.4 million and Venezuela in second behind Fantastic Four with $1.16 million. However, India opened to $321K on 238 screens and South Korea bowed to just $301K on 271 screens.

Minions pulled in $10.9 million (-27%) from 57 territories this weekend, and has now grossed $714.2 million overseas and $1.044 billion worldwide. The animated spinoff film from Universal Pictures and Illumination Entertainments opened in Turkey with $866K which was the second-biggest opening for an animated film in Turkey, just 12% below Ice Age: Continental Drift. There are two more territories to release: China next Sunday and Greece on September 24.

Ant-Man finally burrowed into South Korea this weekend earning the highest opening for a Marvel Cinematic Universe first installment with $9.2 million since releasing on Thursday. Paul Rudd’s diminutive superhero grossed $10 million from 35 total territories, lifting the overseas total to $210.5 million and the global total to $383.69 million. Ant-Man flies into Japan on September 19.

Rogue Nation opens in its final territory China on Tuesday. The film had its premiere in Shanghai on Saturday with Tom Cruise, co-star Rebecca Ferguson and director Christopher McQuarrie in attendance. Cruise also met with Alibaba CEO Jack Ma whose Alibaba Pictures co-financed Rogue Nation. The film should be on the same level as this summer’s blockbusters Avengers: Age of Ultron and Jurassic World and early predictions are saying $200M+ is possible.

Crime drama The Dead End earned $9.25 million (-40%) in its second weekend of release in China. The film which earned joint Best Actor awards for its three leading men at the Shanghai International Film Festival has earned $41.85 million and is attracting a sizable female audience.

Japanese audiences seem to be buying Ted 2’s schtick, giving the foulmouthed teddy $2.4 million for a $10.7 million 9-day total. The Universal sequel earned $4.7 million (-50%) from 45 territories this frame, lifting the overseas total to $120 million and the worldwide gross to $201.3 million. Indonesia will be the film’s final release on Wednesday.

Vacation drove off with $4.3 million (-36%) from 55 overseas territories this frame, bringing the international cume to $34.1 million and the worldwide haul to $90.75 million. Russia took 2nd in the market behind Hitman: Agent 47 with $914K on 1,069 screens and has grossed $3.4 million after two weekends of release. Vacation will open in Brazil on Thursday.

Fantastic Four grossed $3.5 million (-49%) from 49 total markets this weekend, lifting its international cume past the century mark to $101.1 million and its worldwide total to $155.6 million. The global flop from 20th Century Fox opens has two more territories to release — Japan and Italy over the next two months.

This weekend Jurassic World became just the fourth film ever to cross $1 billion at the international box office. Thanks to a $2.7 million (-31%) weekend from 29 territories including $2.3 million from Japan, Jurassic has now earned $1.003 billion overseas and $1.65053 billion worldwide. Universal Pictures also became the first studio ever to cross $6 billion worldwide in one year.

Paper Towns found $2.2 million (+16%) this weekend including an excellent $1.5 million second-place opening in Italy from 340 screens. The film has now opened in all its overseas territories and has grossed $50.4 million at the international box office and $81.9 million worldwide.