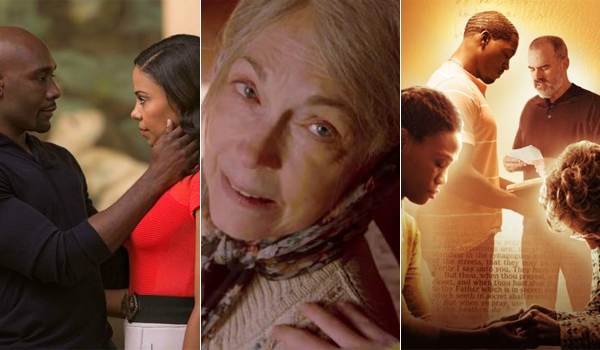 It turned out to be a very close race for first place this weekend between Sony's The Perfect Guy and Universal's The Visit. Heading into the weekend it had been widely expected that it would be a close race between the two PG-13 rated newcomers, but both films ultimately exceeded pre-release expectations by roughly $10 million each. With the studio estimates for the two films only separated by $1.01 million, the weekend race between the two obviously won't be decided until weekend actuals are reported on Monday.

The Perfect Guy currently has the edge for first place with an estimated $26.70 million debut this weekend. The low-budget thriller starring Sanaa Lathan, Michael Ealy and Morris Chestnut significantly exceeded expectations as mentioned and performed very well with its low cost in mind. With The Perfect Guy, Sony closely followed the template of last year's No Good Deed and the opening weekend results were even stronger for The Perfect Guy as it opened 10 percent ahead of the $24.25 million debut of No Good Deed. After having a tough go of it throughout much of 2015, Sony has rebounded nicely over the past few weeks thanks to War Room and now The Perfect Guy. Films with predominantly African American casts have been especially strong performers over the past month, as Straight Outta Compton, War Room and The Perfect Guy have all exceeded expectations.

The Perfect Guy took in $9.95 million on Friday (unlike The Visit and most recent wide releases in general, the film didn't have pre-midnight shows on Thursday), increased a slim 5 percent on Saturday to gross $10.45 million and is expected to decline 40 percent on Sunday to gross $6.3 million. That gives the film an estimated opening weekend to Friday ratio of 2.68 to 1. It should be noted that Sunday's percentage declines in general are expected to start being sharper now as a result of the start of the NFL season (as well as the end of the summer season). The audience breakdown for The Perfect Guy skewed heavily towards female moviegoers (69 percent) and towards moviegoers over the age of 25 (58 percent). The Perfect Guy received a strong A- rating on CinemaScore, though the film could still very well be quite front-loaded towards opening weekend given how front-loaded No Good Deed was last fall.

The Visit opened in a close second with an estimated $25.69 million. When taking into account its relatively modest pre-release expectations and its small price tag, the M. Night Shyamalan directed horror thriller from Blumhouse Productions arguably represents Shyamalan's strongest debut since the $50.75 million start of 2004's The Village. The Visit opened 42 percent stronger than the $18.04 million start of 2006's Lady in the Water and 16 percent below the $30.52 million debut of 2008's The Happening (both of which carried significantly larger price tags). The Visit represents another strong performer for Universal in what has already been a record-breaking year for the studio.

The Visit started out with $9.22 million on Friday (which included an estimated $1.02 million from Thursday night shows), increased a promising 15 percent on Saturday to gross $10.62 million and is estimated to decrease 45 percent on Sunday to gross $5.85 million. That gives the film an estimated opening weekend to Friday ratio of 2.79 to 1. That is a strong ratio for a horror film and is a good early sign for the film going forward. The film's B- rating on CinemaScore isn't quite as glowing in comparison, but it also suggests that the film is going over better with moviegoers than many of Shyamalan's more recent efforts have. The audience breakdown for The Visit skewed towards female moviegoers (60 percent) and slightly towards moviegoers 21 years and older (52 percent).

Sony's War Room continued to hold up very nicely with an estimated third place take of $7.4 million. The break-out Kendrick Brothers produced faith based film from TriStar and AFFIRM Films was down a slim 22 percent from last weekend's three-day take. This weekend's percentage hold is made even more impressive given that Labor Day weekend helped inflate last weekend's performance. War Room continues to exceed expectations greatly with a 17-day take of $39.19 million. The film is currently running 84 percent ahead of the $21.28 million 17-day gross of 2011's Courageous and 20 percent ahead of the $32.56 million 17-day total of last year's God's Not Dead.

A Walk in the Woods followed in fourth with an estimated $4.62 million. The Robert Redford led comedy from Broad Green Pictures was down a respectable 44 percent from last weekend's three-day debut. A Walk in the Woods has grossed a stronger than expected $19.88 million through twelve days of release. That places the film 11 percent ahead of the $17.98 million twelve-day take of last year's The November Man and 9 percent behind the $21.87 million twelve-day gross of 2011's The Debt.

Sony reports that The Perfect Guy bowed to an excellent $9.95 million on Friday, blowing past pre-weekend expectations. The PG-13 thriller was 13 percent stronger than a similarly themed flick that opened this same weekend last year: No Good Deed ($8.8 million opening day) -- which was also a PG-13 thriller from Sony. Early word of mouth is solid for its genre with a 71 percent Flixster score as of this morning, which is (again) close to Deed's 74 percent Saturday score one year ago. The studio also reports a positive "A-" CinemaScore. For the weekend, Sony is projecting as high as $26.5 million for a likely first place finish, more than doubling the pic's $12 million production budget.

Also making a noteworthy debut yesterday was M. Night Shyamalan's The Visit, posting $9.22 million. The micro-budget collaboration between Shyamalan and producer Jason Blum, mixed with an effective marketing campaign and a teen-friendly PG-13 rating, proved to be a successful formula as yesterday's gross nearly doubled the $4.8 million opening day of Devil in September 2010 -- a film which was written, produced, and heavily marketed under Shyamalan's name (even though he didn't direct that one). Even more encouraging is that early word of mouth appears brighter than most horror/thriller titles released so far this year with 67 percent on Flixster. Critically, with a 62 percent Rotten Tomatoes score, this is by far Shyamalan's best reviewed film since 2002's Signs. For the weekend, Universal is projecting a $21.7 million haul, but BoxOffice is a bit more optimistic and expects a frame closer to $22.5 million if it holds up similar to Devil over Saturday and Sunday.

Holding strong in third place yesterday was another recent Sony success, War Room, as it fell just 7 percent from last Friday to $2.16 million yesterday. That gives the faith-based drama a domestic tally of $33.95 million through 16 days of play, 79 percent ahead of where 2011's Courageous stood at the same point. BoxOffice is projecting a fantastic $7.7 million third frame.

A Walk in the Woods eased 34 percent from last Friday to $1.46 million yesterday. That gives the sleeper hit drama from Broad Green Pictures a ten-day total of $16.7 million. BoxOffice projects a $5.1 million sophomore weekend.

Meanwhile, Straight Outta Compton rounded out the top five with an estimated $1.2 million yesterday -- off 46 percent from last Friday. The biopic has now amassed $152.8 million stateside as it heads for a $3.9 million weekend.

Outside the top five, the latest faith-based flick from distributor Samuel Goldwyn bowed fairly in its own right yesterday as 90 Minutes In Heaven earned an estimated $760,000 from 878 locations (previously reported this morning as $730,000 from 838 theaters). While that falls about 37 percent short of Do You Believe?'s $1.2 million first day back in March, 90 Minutes has had decidedly less awareness and more competition with War Room already doing well among the same target audience. BoxOffice is projecting a $2.1 million opening weekend.

Watch BoxOffice on Sunday for official weekend estimates from the studios.

Friday Report #2: Sources report that the weekend is set to shape up as follows:

Friday Report #1: Sources report that The Visit scored a solid estimate of $1.02 million from Thursday night screenings beginning at 7pm in 2,206 locations. That's a very encouraging start to M. Night Shyamalan's first suspenseful thriller in seven years, while also besting the $660,000 Thursday night start of Unfriended earlier this year. For other recent comparisons, The Visit came out ahead of Sinister 2 ($850,000), The Gift ($590,000), The Gallows ($900,000), and last year's Ouija ($910,000). All but the latter of those titles released during summer when schools weren't in session, making The Visit's early showing even more solid heading into the weekend. With a PG-13 rating and the marquee team-up of Shyamalan with producer Jason Blum, plus a (currently) fresh rating on Rotten Tomatoes, the pic is aiming to draw both teens and adults this weekend.