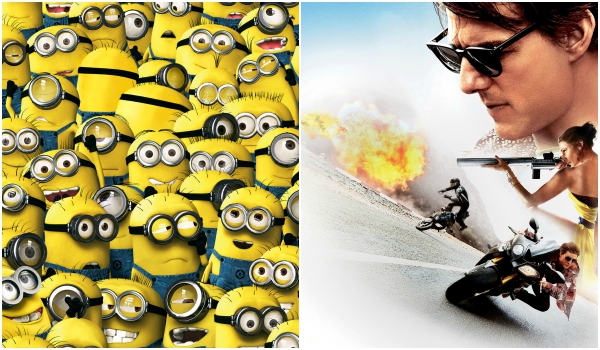 New releases Mission: Impossible - Rogue Nation and Minions took the top 2 spots at the Chinese box office this weekend by a wide margin, and including holdover Terminator: Genisys, Hollywood films accounted for 92% of the market share. Weekend box office receipts totaling ￥465.1M ($73M) doubled the previous weekend thanks to demand for both newcomers.

Rogue Nation started off with a bang, opening on Tuesday with $18.4 million, the second biggest opening day for a 2D film behind this summer's local hit Jianbing Man. Over the weekend, Paramount's action flick earned $45.5 million for a 6-day total of $86.3 million. Among Hollywood films that have also opened on Tuesdays, Rogue Nation's 6-day total is 73% ahead of San Andreas and 43% behind Avengers: Age of Ultron which ended their runs with $98.8M* and $230M respectively. Rogue Nation's opening is also 134% ahead of Mission: Impossible - Ghost Protocol which went on to gross $106.22M in 2012. The film played on 55% of China's screens on Friday, but dropped to 40% on Sunday with Minions opening. The average Rogue Nation ticket was $5.18, more than a dollar cheaper than tickets for San Andreas, Jurassic World, and Ultron which played on 3D and 3D IMAX screens. Non-premium price tickets and muted word of mouth compared to Ghost Protocol will keep Rogue Nation from hitting its pre-release prediction of $200M.

Also underperforming against very lofty expectations, Minions managed to grab 2nd place with an impressive $18.8 million on its opening Sunday. The daily total was the highest single day and opening day gross ever for an animated film in China in local currency. It was also the third highest Sunday opening ever behind this year's Furious 7 ($62.65M) and Terminator: Genisys ($26.38M). Minions opening day was also notably 25% larger than Despicable Me 2's entire opening weekend. However, the pre-release expectations predicting Minions to crack $150M and become the highest-grossing animated film of all-time appear to be off, and for now the record is safe with local animation hit Monkey King: Hero Is Back.

Crime drama The Dead End pulled ahead of Terminator: Genisys for third place this weekend with $2 million. That was off a hefty 79% from last weekend due to the new releases. The Dead End has grossed a respectable $46.7 million in 18 days especially given its niche genre.

Genisys dropped even quicker, falling 86% from last weekend for $1.58 million. The fifth-installment of the Terminator franchise still has grossed an impressive $113.1 million in 22 days of release on the Mainland, outpacing any other territory and perhaps saving the series from what appeared to be an inevitable death after its North American performance.