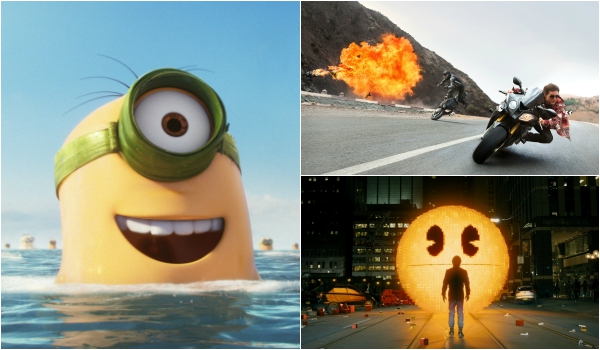 For the second weekend in a row Hollywood dominated the weekend with the top 3 films -- Minions, Mission: Impossible - Rogue Nation, and newcomer Pixels -- accounting for 87% of the market share. However, the trio of Hollywood films were unable to lift up the market and receipts totaled a frigid ￥340.84M ($53.4M), down 27% from last weekend. Next weekend sees the entrance of local film Lost in Hong Kong which will certainly challenge Hollywood's hegemony over the Mid-Autumn Festival (中秋节) and National Day Golden Week (国庆节).

Minions outpaced Rogue Nation earning $19.5 million from ~124,000 weekend screenings for an 8-day total of $50.2 million. The underperforming animation is proving to be a weekend film as 63% of its weekly earnings came from Friday-Sunday and 81% of its weekend total came from just Saturday and Sunday showtimes alone. The "Little Yellow People" -- a translation from the film's Chinese title -- passed Frozen this weekend in local currency and will overtake Despicable Me 2 on Tuesday to become the #8 highest-grossing animated title on the Mainland.

Mission: Impossible - Rogue Nation fell to second this weekend with $18.2 million (-60%) from ~126,000 screenings. Paramount's action film backed by China's Alibaba Pictures has grossed $120.3 million in 13 days and will pass Interstellar on Tuesday to become the highest-grossing 2D imported film of all-time in China.

Both Minions and Mission: Impossible - Rogue Nation are performing under pre-release expectations mostly due to the fact audiences in third and fourth tier cities aren't as receptive as in the big international cities of Beijing, Shanghai, and Guangzhou. The Chinese heartland is where blockbusters are made and this year's hits Furious 7, Ultron, Jurassic World all managed to find that demographic.

Performing on par with its dismal pre-release expectations, Sony's Pixels eked out just $7.2 million from ~75,000 showtimes. Its $12.1 million 6-day opening is 14% behind Disney's Tomorrowland securing Pixels as the most disappointing Hollywood release of 2015 in China.

In fourth place, South Korea's Assassination couldn't win over Chinese audiences managing only $3.9 million from its 4-day opening. The historical thriller has earned $83 million in its home country and is the second highest-grossing film of the year there behind Veteran ($85 million).