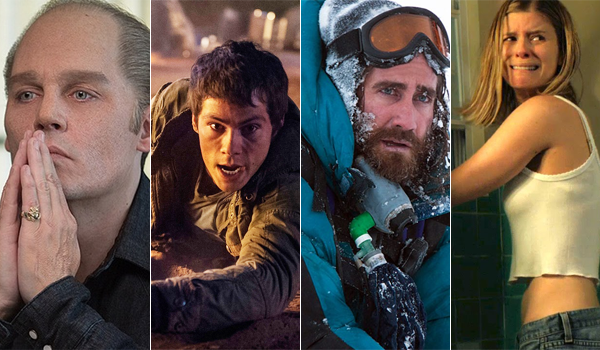 Warner's Black Mass took in $2.71 million on Tuesday to lead the daily box office for a second consecutive day. The Johnny Depp led crime drama was up 27 percent over Monday's performance. It should be noted that daily grosses in general received a boost on Tuesday from the beginning of Yom Kippur. Black Mass has grossed a solid $27.48 million through five days of release. The film is currently running just 4 percent behind the $28.71 million five-day start of 2010's The Town (which increased 14 percent on its first Tuesday to gross $2.62 million).

Maze Runner: The Scorch Trials held steady in second place with $2.50 million. The young adult sequel from Fox increased a strong 49 percent over Monday and trailed Black Mass by only $208,358 for the day. Maze Runner: The Scorch Trials has grossed $34.50 million in five days. That is below pre-release expectations and places the film 6 percent behind the $36.77 million five-day take of last year's The Maze Runner (which jumped 28 percent on its first Tuesday to gross $2.39 million).

It was a close four-way race for third place again on Tuesday, with Universal's The Visit leading the pack with $0.945 million for the day. The low-budget M. Night Shyamalan directed horror thriller from Blumhouse Productions was up 46.5 percent over Monday and down 49 percent from last Tuesday. The Visit continues to exceed expectations with a healthy twelve-day take of $44.16 million. The film is running 29 percent ahead of the $34.16 million twelve-day gross of 2006's Lady in the Water.

Sony's The Perfect Guy followed in fourth with $0.867 million. The low-budget thriller from Screen Gems starring Sanaa Lathan, Michael Ealy and Morris Chestnut increased 33 percent over Monday and decreased 54 percent from last Tuesday. The Perfect Guy continues to impress with a twelve-day gross of $42.98 million. That places the film 5 percent ahead of the $40.98 million twelve-day take of last year's No Good Deed.

Everest rounded out the day's top five with $0.851 million. Universal's 3D adventure drama was up a healthy 38 percent over Monday. Everest continues to play exclusively in 545 IMAX and PLF locations, which gave the film an impressive per-location average of $1,562 for the day. Everest has grossed $8.69 million through five days of moderate release. That represents a very promising start for the film as it prepares to go into traditional wide release on Friday.

Sony's War Room took in $0.832 million to remain in sixth place. In the process, the break-out Kendrick Brothers produced faith based film surpassed the $50 million domestic mark yesterday. War Room has grossed a significantly stronger than expected $50.50 million in 26 days. The film isn't showing any signs of slowing down any time soon thanks in part to continued strong word of mouth.