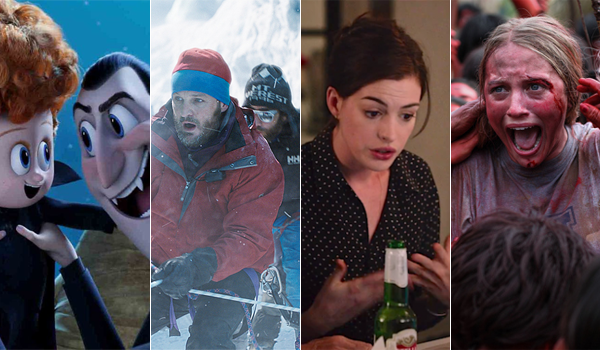 Sony's Hotel Transylvania 2 led the way this weekend with a record-breaking $48.46 million debut. The Adam Sandler led 3D computer animated film from Sony Pictures Animation outpaced expectations and set a new opening weekend record for the month of September (without adjusting for ticket price inflation). Hotel Transylvania 2 opened 14 percent stronger than the $42.52 million debut of its predecessor (and previous September opening weekend record holder) Hotel Transylvania back in 2012. It should be noted that when adjusting for ticket price inflation, 1998's Rush Hour continues to hold the September record with an adjusted gross of $59.04 million from an actual gross of $33.00 million.

Hotel Transylvania 2 opened with $13.33 million on Friday (the film didn't have early shows on Thursday evening), increased 56 percent on Saturday to gross $20.75 million and declined 31 percent on Sunday to gross $14.39 million. That placed the film's opening weekend to Friday ratio at 3.64 to 1. Hotel Transylvania 2 received a healthy A- rating on CinemaScore. The audience breakdown for the film skewed towards female moviegoers (59 percent) and moviegoers under the age of 25 (60 percent). Parents and kids represented 69 percent of the film's overall audience.

Warner's The Intern was off to a nice start this weekend with a second place take of $17.73 million. The Nancy Meyers directed comedy starring Robert De Niro and Anne Hathaway opened on the high end of pre-release expectations. The film's success this weekend was largely driven by its co-stars and director. With the release slate this September and October being full of dramas and thrillers, The Intern also stood out for moviegoers currently in the mood for a comedy. The Intern opened 9 percent ahead of the $16.33 million start of 2013's Last Vegas.

The Intern started out with $6.22 million on Friday (which included an estimated $650,000 from Thursday night shows), increased an encouraging 18 percent on Saturday to take in $7.35 million and fell 43.5 percent on Sunday to gross $4.15 million That gave the film an opening weekend to Friday ratio of 2.85 to 1. That is a solid early sign for The Intern going forward, as is the film's healthy A- rating on CinemaScore. The Intern will have a good chance of holding up well in the weeks ahead, especially given the relative lack of comedies entering the marketplace during October. The audience breakdown for the film skewed towards female moviegoers (62 percent) and heavily towards moviegoers over the age of 25 (88 percent).

After a very promising start in moderate release last week, Everest was unable to break out upon going into wide release this weekend. Instead, the 3D adventure drama from Universal had to settle for a modest fourth place take of $13.24 million. While Everest was up 83 percent over last weekend, the film's per-location average also eroded greatly in the process of such a large expansion. The film's softer than anticipated expansion this weekend in combination with the film's good performance last week strongly suggests that moviegoers especially want to experience Everest in the IMAX format. Everest has grossed $23.28 million through ten days of release (with IMAX grosses representing an estimated $11.5 million of that total thus far).

Everest took in $4.00 million on Friday, increased 47 percent on Saturday to gross $5.88 million and fell 43 percent on Sunday to take in $3.37 million. That placed the film's weekend to Friday ratio at 3.31 to 1. Everest received a strong A rating on CinemaScore. The film will now have to depend much more on holding power going forward, which will be easier said than done given the new competition it will be facing throughout the month of October, especially from Fox's highly anticipated The Martian beginning this coming Friday. It should be noted that Everest is performing significantly stronger overseas than it is domestically so far.

Warner's Black Mass rounded out the weekend's top five with $11.03 million. The Johnny Depp led crime drama was down three spots and 51 percent from last weekend, which suggests that the film isn't going over as well with moviegoers as it has with critics. It should also be noted that based on its performance thus far, Black Mass has been relatively stronger on weekdays than it has been on weekends. The ten-day total for Black Mass stands at $42.13 million, which places the film 13.5 percent behind the $48.69 million ten-day gross of 2010's The Town and 9 percent ahead of the $38.55 million ten-day take of 2013's Prisoners.

Meanwhile, The Green Inferno debuted in ninth place this weekend with $3.52 million. The long delayed Eli Roth directed horror film was given a wide release by Blumhouse's new BH Tilt distribution label and by High Top releasing. The Green Inferno opened towards the lower end of its already low expectations. The film started with $1.48 million on Friday, fell 16 percent on Saturday to gross $1.24 million and fell 35 percent on Sunday to gross $0.80 million. That placed the film's opening weekend to Friday ratio at a front-loaded 2.38 to 1. The audience breakdown for The Green Inferno skewed towards male moviegoers (57 percent) and towards moviegoers 25 years and older (57 percent). The Green Inferno received a lackluster C- rating on CinemaScore and should fade away from theatres quickly.

On the platform front, Lionsgate's Sicario excelled this weekend with $1.72 million from 59 locations. That gave Sicario a strong per-location average of $29,107 for the frame and placed the film in tenth place among all films this weekend. The critically acclaimed crime thriller starring Emily Blunt, Benicio Del Toro and Josh Brolin has grossed $2.30 million in ten days of platform release. After this weekend's performance, Sicario appears to be in good shape for its expansion into wide release next weekend.