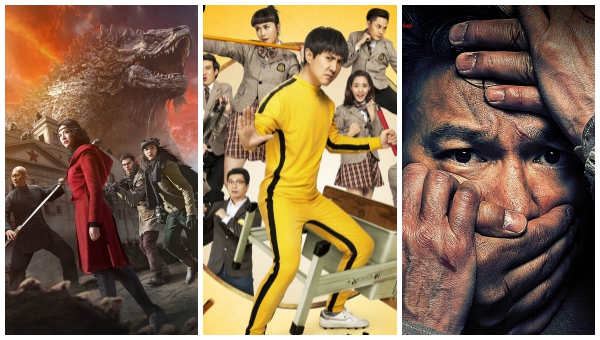 This week brings China's National Holiday, a seven day break for students and workers to celebrate the anniversary of the founding of China. This "Golden Week" is one of the most sought after release periods for distribution companies; last year's releases were led by Breakup Buddies ($98.8M) and the top four films during the week combined for ￥1.084B ($170.26M) nearly doubling the 2013 National Holiday total.

Chinese box office pundits are expecting this year's crop of releases to up the ante possibly grossing ￥1.4B-￥1.6B ($220M-$250M) for the 7-day period. Lost in Hong Kong, last weekend's huge hit with a $107M debut, will still own the highest percentage of screens come Wednesday, but three new openers will certainly erode its box office dominance.

The biggest opener is Chronicles of a Ghostly Tribe (九层妖塔), an action/adventure film adapted from best-selling novel Ghost Blows Out the Candle. The film follows former soldier Hu Bayi and his band of tomb raiders who encounter a tribe of mythical beasts. Ghostly Tribe earned an impressive $3.2 million from preview screenings last Sunday and will look to carry that momentum into Wednesday behind a strong partnership with WePiao, the online ticketing platform from messaging app WeChat. Cheap tickets will probably push Ghostly Tribe ahead of Hong Kong its first few days, but then it will trail off by the end of the holiday. This is the first of two film adaptations of the hotly contested intellectual property; LeVision has this one while Wanda will release its own version Ghouls on December 18.

In direct competition for Lost in Hong Kong's demographic, comedy Goodbye Mr. Loser (夏洛特烦恼) also opens Wednesday. Mr. Loser is the first film for the stage comedy troupe Kaixin Mahua (lit. Happy Fried Dough) which rose to fame after its 2012 Spring Festival Gala performance. The troupe comprises of mostly post-80s comedic performers and has amassed a devoted youth following around China. They also brought the film on a one month roadshow successfully building word-of-mouth and some Chinese media outlets believe this could become the holiday's sleeper hit. Look for it to start slow, but have longer legs than other releases, similar to Wolf Totem's run earlier this year. Mr. Loser has partnered with Gewara for online ticketing.

Crime thriller Saving Mr. Wu (解救吴先生) also enters Chinese cinemas this Wednesday. It is based on the real-life kidnapping of Hong Kong actor Wu Ruofu in 2004 and director Ding Sheng (Police Story 2013) casts Andy Lau in the role of Mr. Wu. The film had an unprecedented three rounds of preview screenings grossing a solid $2.1M, but given the limited genre appeal the previews may have already brought out most of Mr. Wu's core demographic. Online tickets for Saving Mr. Wu are being sold in cooperation with Baidu's group-buying platform Nuomi.

Predictions for the 7-day Holiday/Overall Run: