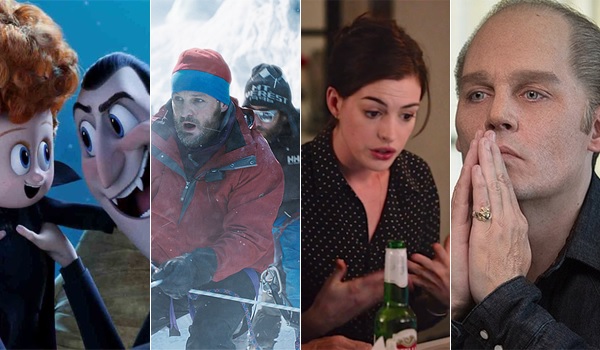 Sony's Hotel Transylvania 2 grossed $1.97 million on Wednesday to lead the daily box office for a sixth straight day. The Adam Sandler led 3D computer animated sequel from Sony Pictures Animation was down a sharp 34 percent from Tuesday's performance. Hotel Transylvania 2 has grossed a strong $55.75 million through six days of release. The film continues to outpace expectations and is running an impressive 16 percent ahead of the $48.05 million six-day start of 2012's Hotel Transylvania (which slid 30 percent on its first Wednesday to gross $1.54 million).

Warner's The Intern held steady in second place with $1.72 million. The Nancy Meyers directed comedy starring Robert De Niro and Anne Hathaway was down 29 percent from Tuesday, which represented a respectable daily hold given the strength of the film's performance on Tuesday. The Intern has grossed $23.37 million in six days. That is on the high end of pre-release expectations and places the film 11 percent ahead of the $21.03 million six-day gross of 2013's Last Vegas (which fell 26 percent on its first Wednesday to take in $1.42 million).

Fellow Warner Bros. release Black Mass was up one spot from Tuesday to move into third place on Wednesday with $1.13 million. The Johnny Depp led crime drama was down just 21 percent from Tuesday and down 43 percent from last Wednesday. Black Mass has grossed a solid $45.75 million in thirteen days, which places the film 10.5 percent ahead of the $41.39 million thirteen-day take of 2013's Prisoners.

Everest was down one spot and a very sharp 42 percent from Tuesday to land in fourth with $0.933 million. The 3D adventure drama from Universal took a clear hit from losing IMAX screens to The Walk on Wednesday. The thirteen-day total for Everest stands at a modest $26.92 million. In addition to losing its IMAX screens, Everest will also be facing new direct competition from Fox's highly anticipated The Martian beginning on Friday.

Maze Runner: The Scorch Trials took in $0.820 million to remain in fifth. The young adult sequel from Fox fell 33 percent from Tuesday and a sizable 53 percent from last Wednesday. Maze Runner: The Scorch Trials has grossed $54.87 million in thirteen days. That is below expectations and places the film 10 percent behind the $61.92 million thirteen-day gross of last year's The Maze Runner.

Meanwhile, Sony's The Walk was off to a slow start on Wednesday with an opening day take of just $240,379. The 3D Robert Zemeckis directed film starring Joseph Gordon-Levitt is currently playing in 448 IMAX and PLF locations. That gave the film a lackluster per-location average of $537 for the day. The Walk will hope to see its strong critical reviews transfer into strong word of mouth going forward.

Lionsgate's Sicario was far more impressive with $195,161 on Wednesday from just 59 locations. That represented a slim 2 percent decline from Tuesday and gave Sicario a strong per-location average of $3,308 for the day. The critically acclaimed crime thriller starring Emily Blunt, Benicio Del Toro and Josh Brolin has grossed a very encouraging $2.87 million in thirteen days of platform release. Sicario expands into wide release on Friday.