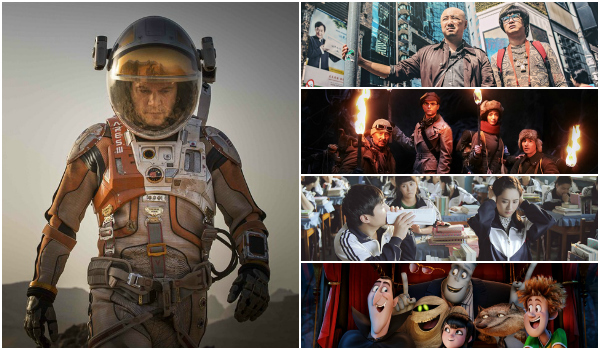 Chronicles of the Ghostly Tribe, an FX driven action/adventure film from China scored a second place finish over the weekend with $35.0 million. Directed by Lu Chuan (Nanjing! Nanjing!), the poorly reviewed Chronicles played particularly well in 3rd and 4th tier Chinese cities where spectacle still reigns over substance for filmgoers and has made $69.4 million since debuting last Wednesday.

China’s surprise hit over the National Day holidays was low-budget comedy Goodbye Mr. Loser which grossed $30.4 million this weekend for a 5-day $42.2 million total. Created by the comedic theater troupe Kaixin Mahua (lit. Happy Fried Dough), Mr. Loser is riding amazing word of mouth and has seen increases in its daily grosses since Wednesday, even overtaking Lost in Hong Kong on Sunday for the daily crown.

Hotel Transylvania 2 dropped just 33% from its opening weekend for $20.4 million from 50 overseas markets. After two weekends of release, Sony’s animated sequel has $59.8 million overseas and $150.34 million worldwide. Latin America is being a particularly friendly guest for Hotel contributing $41.8 million across the region and surpassing the entire lifetime box office of the original film there by 15%. Mexico ($4.6M/$14.8M cume) leads the way, followed by Venezuela ($6.2M cume), Brazil ($1.8M/$5.0M cume) and Argentina ($1.3M/$3.9M cume). The film has only opened in 1/3 of its final international footprint with France opening Oct 7, Italy on Oct 8, Germany on Oct 15, Russia on Oct 22, and Spain on Oct 23.

The Intern held strong in its second weekend of release grossing $15.7 million from 57 overseas markets. Nancy Meyer’s film is up to $35.6 million at the international box office and $72.12 million worldwide. Among openers, Australia opened in 2nd place with $1.65 million from 305 screens, Mexico bowed to a 4-day $1.2 million debut across 615 screens, and the UK/Ireland premiered with $1.2 million from 433 screens. The strongest holdover market was South Korea, actually increasing 51% over opening weekend with $4.1 million and taking the 11-day total there to $9.8 million. Russia dropped just 17% for $1.1 million and $3.0 million total while Taiwan took 2nd place, falling 7% for $994K from 95 screens. The Intern has passed the lifetime cumes of all Nancy Meyer’s films on the island with a $3.3 million after two weekends of release.

Disney/Pixar’s Inside Out took $12.6 million from 25 total overseas markets this weekend including three new German language territories. The film placed first in Austria, German-speaking Switzerland, and Germany where it posted an estimated $7.1 million which is the 3rd biggest Pixar opening there behind Finding Nemo and Ratatouille. Inside Out edged past Monsters University this weekend to become the 4th highest-grossing Pixar release overseas with $438.4 million and its $792.3 million global total ranks 2nd for the studio behind Finding Nemo ($895.6M) and Toy Story 3 ($1.0632B). Inside Out opens on Tuesday in China where Pixar films have struggled to find a foothold in the past. Predictions are putting the film’s run between $30M and $50M.

Saving Mr. Wu, a crime thriller starring Hong Kong star Andy Lau, took in $7.9 million over the holiday weekend in China and has grossed $15.0 million after 5 days. The film is based on the real life kidnapping of a popular Hong Kong actor in 2004.

Minions continued its climb up the all-time charts this weekend with $6 million from 44 territories. The animated hit now ranks as the 10th highest-grossing film and the 2nd highest grossing animated film of all-time both overseas with $811.4 million and worldwide with $1.145 billion. China held strong over the National Holiday weekend, dropping just 17% for $4.0 million and a 22-day total of $65.8 million. Minions has opened in all its international territories and is nearing the end of its run with 8 days left in China.

The Visit found $3.3 million in 30 overseas territories for a international total of $19.0 million. M. Night Shyamalan’s thriller has grossed $76.7 million overseas. Taiwan opened with $76K and Vietnam with $69K this frame. The Visit opens next weekend in France and French-speaking Switzerland.

Mission: Impossible - Rogue Nation discovered $2.2 million this weekend from 38 overseas markets, lifting its international total to $485.0 million and the global total to $679.1 million. Rogue Nation grossed $1.4 million in its second weekend in China bringing the total there to $135.6 million. This fifth installment ranks just behind 2011’s Ghost Protocol ($694.7M) for the highest-grossing film worldwide in the Mission series.