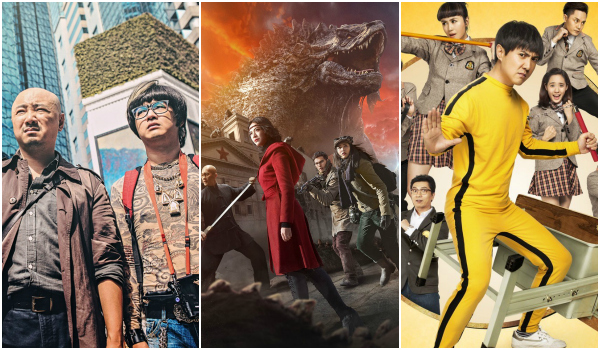 Lost in Hong Kong, the sequel to 2012's breakout comedy hit Lost in Thailand (泰囧), earned $41.9 million from ~131,600 showtimes this weekend. The film has grossed $209.2 million after just 10 days of release and surpassed its predecessor on Sunday to become the highest-grossing 2D Chinese-language film of all-time. In addition, Hong Kong is 1% ahead of the 10-day total for Monster Hunt (捉妖记), China's highest-grossing film of all-time. Hong Kong did lose ground however, falling a pretty steep 60% from its opening weekend amid strong competition. In comparison, Monster Hunt had a sub-40% drop in its second weekend of release and maintained average weekly drops of 40% throughout its 2-month long record run so early predictions that Hong Kong could challenge Monster Hunt's record should be put to rest.

Chronicles of the Ghostly Tribe (九层妖塔), an FX-driven action/adventure film grossed $34.8 million from ~115,700 screenings to take second place and has earned $69.3 million since opening Wednesday. After narrowly edging out Hong Kong on its opening day, Ghostly Tribe has seen steady daily drops of 16%, even placing third behind Goodbye Mr. Loser (夏洛特的烦恼) and Hong Kong on Sunday. The film is based on a popular novel about tomb raiders and has scored well in third- and fourth-tier cities despite overwhelmingly poor reviews.

The surprise hit of the National Day Holiday, low-budget comedy Goodbye Mr. Loser pulled in $30.2 million over the weekend from just ~80,000 showtimes for a 5-day total of $42.0 million. The film from the comedic theater troupe Kaixin Mahua (开心麻花) has followed a trajectory unlike Hong Kong and Ghostly Tribe, steadily increasing since its opening day much like this summer's Monkey King: Hero is Back (西游记之大圣归来) which went on to surprise everyone with $154 million. Mr. Loser's unexpected success seems to have affected Hong Kong's longevity since the two films share a similar core demographic and starting Sunday Mr. Loser will easily overtake the much higher-budgeted blockbuster in daily grosses as well as screen percentages.

The rest of this weekend's top ten can be found below with data from China's State Administration of Radio, Film, and Television (SARFT). 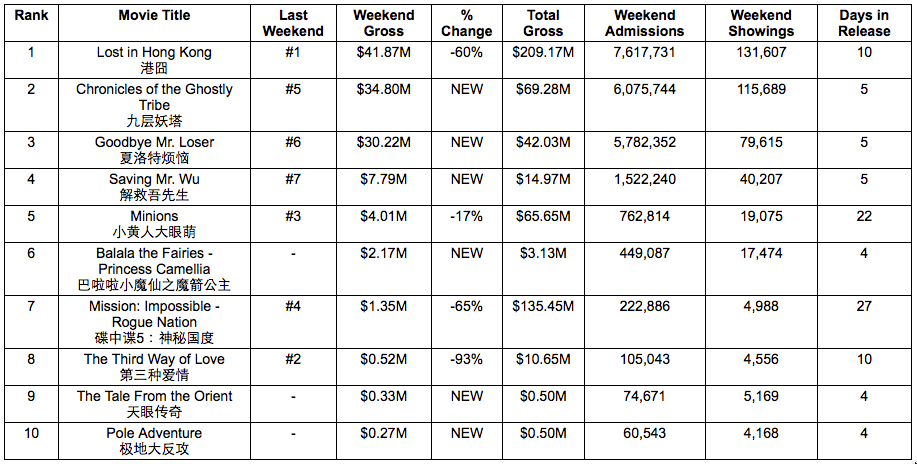