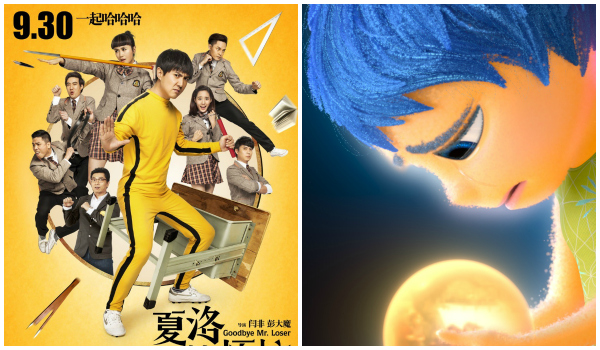 Goodbye Mr. Loser (夏洛特烦恼) was the big winner at the Chinese box office this truncated weekend grossing $39.4 million from ~135,000 showtimes. Businesses and schools were in session nationwide on Saturday, making up a workday after last week's National Day Holiday. The comedy from Beijing theater troupe Kaixin Mahua has earned an outstanding $142.6 million after 12 days of release. Even more astonishing, Mr. Loser jumped 30% from last weekend thanks to incredible word of mouth that has spread like wildfire through social networking apps like WeChat.

Falling a steep 81% after the holiday, Lost in Hong Kong (港囧) managed $8.2 million this weekend from ~75,000 screenings. The sequel to director Xu Zheng's breakout hit Lost in Thailand has grossed $246.1 million through 17 days and will likely finish as the fourth highest grossing film of all-time in China behind Transformers 4 ($312.8M), Furious 7 ($383.6M), and Monster Hunt ($385.4M). Hong Kong's relatively week legs can be attributed to overall poorer word of mouth than the original. However, the "Lost in..." brand name and Xu Zheng have both established themselves as dependable properties and the franchise is sure to continue.

Also dropping off significantly after a strong holiday outing, Chronicles of the Ghostly Tribe (九层妖塔) plummeted 79% to take in $7.2 million. The FX-driven action/adventure film passed the $100 million mark after 12 days of release which bodes well for the three remaining installments in the Ghostly Tribe series.

Debuting in fourth place, Pixar's Inside Out performed below already modest expectations, earning $4.1 million for a 6-day $12.4 million total. The film is tracking 38% behind Monsters University's 6-day start from two years ago and given the market expansion since then, especially in animation, Disney/Pixar must rethink its strategy to succeed in China.