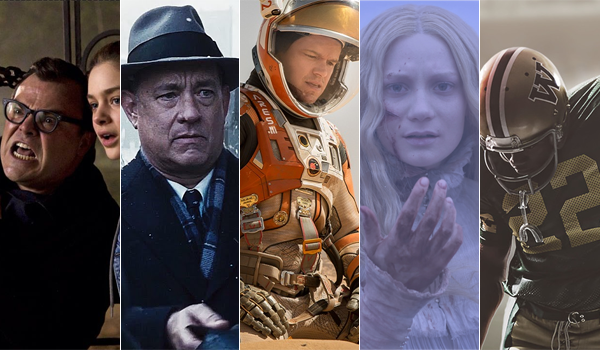 Sunday Update: It was a fairly close race for first place at the box office this weekend, with Sony's Goosebumps outpacing the third weekend performance of Fox's The Martian. Goosebumps led the way with an estimated debut of $23.5 million. The 3D horror comedy starring Jack Black opened towards the lower end of expectations and was off to a solid start with its reported $58 million production budget in mind. Goosebumps was no doubt helped out by the pre-existing fanbase for the R.L. Stine written book series and by the decision to release the film shortly before the Halloween holiday. The film opened 18 percent ahead of the $19.88 million debut of last year's Ouija and 8 percent behind the recent $25.43 million start of The Visit. Given its family audience and the approaching Halloween holiday, Goosebumps is highly likely to hold up better going forward than both of those films did.

Goosebumps opened with $7.37 million on Friday (which included an estimated $600,000 from Thursday evening shows), increased 33 percent on Saturday to take in $9.77 million and is estimated to decline 35 percent on Sunday to gross $6.37 million. That places the film's estimated opening weekend to Friday ratio at 3.19 to 1, which does indicate that the film experienced some relative front-loading for a family film this weekend. Goosebumps received an excellent A rating on CinemaScore, which is a positive sign for the film going forward. The audience breakdown for Goosebumps was evenly split between male and female moviegoers and skewed towards moviegoers under the age of 25 (59 percent).

After comfortably leading the box office for the previous two weeks, The Martian fell to second place this weekend with an estimated $21.5 million. The critically acclaimed Ridley Scott directed 3D sci-fi film starring Matt Damon was down 42 percent from last weekend. While The Martian lost a bit of steam this weekend, the film is still performing very well in the bigger picture with a 17-day gross of $143.80 million. That places The Martian 19 percent ahead of the $120.93 million last year's Interstellar had grossed after 17 days of wide release and 15 percent behind the $169.56 million 17-day take of 2013's Gravity. Both comparisons suggest that The Martian is still in good shape to surpass the $200 million domestic mark before the end of its run.

Disney and DreamWorks' Bridge of Spies debuted in third place this weekend with an estimated $15.38 million. The critically acclaimed Steven Spielberg directed thriller starring Tom Hanks debuted on the low end of its relatively modest expectations, which had been held in check by the film's Cold War setting and by the current high level of overall competition for adult audiences. Bridge of Spies opened 19 percent below the $19.05 million start of 2004's The Terminal, which represented the last theatrical collaboration between Spielberg and Hanks. Given its strong critical reviews and that Spielberg's films usually display strong holding power; it is likely that Bridge of Spies will be in store for a lengthy box office run.

Universal's Crimson Peak followed in fourth place with a lackluster estimated start of $12.85 million. The Guillermo del Toro directed gothic horror romance starring Mia Wasikowska, Jessica Chastain and Tom Hiddleston debuted a bit below expectations. While Crimson Peak opened within shouting distance of Bridge of Spies this weekend, Crimson Peak is expected to be more front-loaded in comparison to Bridge of Spies and also carried a higher price tag. Potential for Crimson Peak to appeal towards horror fans and del Toro's fanbase appears to have ultimately been limited by the film's gothic nature. Crimson Peak debuted 24.5 percent below the $17.01 million debut of last year's The Book of Life (which was produced by del Toro).

Crimson Peak opened with $5.27 million on Friday (which included a significant $855,000 from Thursday evening shows), declined 7 percent on Saturday to gross $4.89 million and is estimated to fall 45 percent on Sunday to take in $2.69 million. That places the film's estimated opening weekend to Friday ratio at front-loaded 2.44 to 1. Crimson Peak received a modest B- rating on CinemaScore. That doesn't suggest that Crimson Peak will hold up especially well going forward, though the film could still experience some relative back-loading given its pre-Halloween release and the lack of an opening weekend rush out. The audience breakdown for Crimson Peak skewed towards female moviegoers (60 percent) and towards moviegoers 25 years and older (55 percent). IMAX grosses were responsible for an estimated $2.3 million of the film's overall gross this weekend.

Sony's Hotel Transylvania 2 rounded out the weekend's top five with an estimated $12.25 million. Sony's Adam Sandler led 3D computer animated film was down 40 percent from last weekend. That represented a solid weekend hold, especially given the new direct competition for family audiences the film faced from fellow Sony release Goosebumps. Hotel Transylvania 2 continues to impress with $137.06 million through 24 days of release. That places the film a healthy 16 percent ahead of the $118.52 million 24-day gross of 2012's Hotel Transylvania.

Meanwhile, Woodlawn debuted in ninth place with an estimated $4.10 million. The faith-based sports drama from Pure Flix opened on the high end of its modest expectations. Woodlawn opened 14 percent ahead of the $3.59 million start of Pure Flix's Do You Believe? earlier this year. While it was off to a solid start, Woodlawn was also relatively front-loaded this weekend. The film opened with $1.49 million on Friday, declined 9 percent on Saturday to gross $1.35 million and is estimated to fall just 6 percent on Sunday to gross $1.27 million; which gives Woodlawn an estimated opening weekend to Friday ratio of 2.76 to 1. Despite the initial front-loading, Woodlawn will still have a good chance of holding up well going forward, especially after receiving an A+ rating on CinemaScore.

Universal's Steve Jobs continued its strong platform performance with an estimated $1.55 million from 60 locations. That gave the Danny Boyle directed drama starring Michael Fassbender a per-location average of $25,833 for the frame. Steve Jobs has grossed a very encouraging $2.26 million through ten days of platform release. The film will expand into wide release this coming Friday when it will be playing in an estimated 2,400 locations.

Saturday Update: Sony reports that Goosebumps claimed the top spot in its opening day on Friday with an estimated $7.35 million. By comparison, that's 39 percent stronger than the first day of Alexander and the Terrible, Horrible, No Good, Very Bad Day, a fellow family-friendly adaptation that debuted this time last year. Jack Black's continued reliability among both parents and kids continues to be an advantage for Goosebumps, as does the film's generational appeal overall. The studio reports a strong "A" CinemaScore, while early word of mouth is encouraging at a 78 percent Flixster score (on top of 73 percent from Rotten Tomatoes critics). The film's production budget was $58 million. Sony projects a $25 million opening weekend, but BoxOffice is a bit more optimistic and currently projects a $25.3 million frame.

Moving down to second place for the first time in its run, The Martian eased 41 percent from last Friday to $6.325 million yesterday. That gives the hit film a domestic tally of $128.6 million through 15 days of play, putting it 13 percent behind the pace of Gravity and 17 percent ahead of Interstellar. BoxOffice projects a strong third weekend of $21.9 million.

Debuting in third place, Bridge of Spies posted a $5.347 million first day gross. That's about 37 percent short of Captain Phillips' opening day two years ago, but it does stand 22 percent higher than Body of Lies' first day back in October 2008. The fourth collaboration between director Steven Spielberg and leading man Tom Hanks is certainly poised for a strong run based on early word of mouth and reviews: Disney reports an "A" CinemaScore, critics have awarded it a 93 percent rating on Rotten Tomatoes, and Flixster users give it an excellent 92 percent as of Saturday morning. BoxOffice is projecting a $16.2 million opening weekend.

Guillermo del Toro's Crimson Peak bowed in fourth place yesterday with $5.27 million. By comparison, that's about 18 percent shy of Sam Raimi's Drag Me to Hell opening day back in May 2009. Early word of mouth and reviews are mixed with 68 percent scores on both Rotten Tomatoes and Flixster this morning. Universal and BoxOffice are projecting a $13 million weekend.

Filling out the top five, Hotel Transylvania 2 was down 37 percent from last Friday to $3.35 million yesterday. With $127.5 million in the domestic bank so far, the sequel is trending 14 percent ahead of its predecessor. Look for a weekend around $12.9 million.

Meanwhile, Pure Flix Entertainment's Woodlawn debuted to a healthy $1.5 million from 1,500 locations yesterday. The latest faith-based drama opened 25 percent higher than the studio's previous entry in that genre, Do You Believe?'s $1.2 million first day. Word of mouth among the target audience is also very positive with a 90 percent Flixster score. Pure Flix and BoxOffice are projecting a $5 million opening frame.

Finally, Universal's Steve Jobs expanded into limited release in 60 theaters yesterday with a $516,000 estimated gross (for an $8,600 per-theater average). That gives the strongly reviewed film a $1.23 million domestic total so far as it continues to build big buzz ahead of its nationwide expansion on October 23. Look for this weekend to land around $1.7 million.

Friday Update #2: Early Friday reports are popping up based on matinee trends. Here's how the weekend is shaping up according to various sources, with very close races for first and third places so far:

Friday Update #1: Sources report that Guillermo del Toro's Crimson Peak bowed to an estimated $855,000 from early shows last night. That's in line with Sinister 2's $850,000 Thursday night haul back in August, and although that pic was a sequel that burned off a big chunk of demand early in the weekend, some front-loading is still to be expected for Crimson given del Toro's passionate fan base.

Goosebumps posted an encouraging $600,000 in its Thursday night start. By comparison, last week's Pan started with $650,000, although Goosebumps has a few added advantages with generational appeal, mostly positive reviews, and the family-friendly leading man in Jack Black.

Taking in a healthy haul of its own, Bridge of Spies landed $500,000 from last night's early shows. That's a solid start for the fourth collaboration between Steven Spielberg and Tom Hanks, finishing not far behind the $600,000 earned by the latter's Captain Phillips two years ago.

No Thursday numbers were yet reported for Woodlawn at the time of publishing.

Meanwhile, The Martian is expected to continue its strong holding power in its third weekend. More updates as they come.