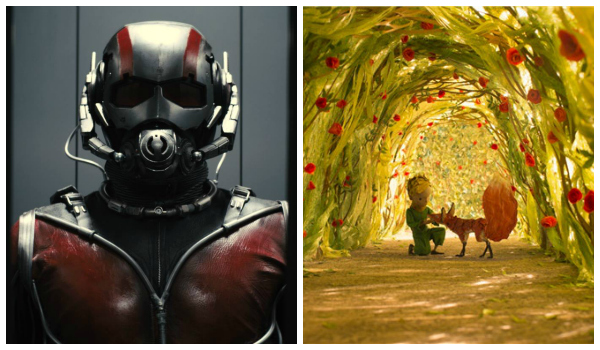 After their last two films Tomorrowland and Inside Out failed to make waves on the Chinese Mainland, Disney executives can breathe a sigh of relief as the Marvel brand isn't showing any signs of fatigue in the world's second biggest film market.

Ant-Man (蚁人) earned an impressive $42.3 million on its opening weekend from ~175K showtimes, scoring the second-highest 3-day debut for a Marvel Cinematic Universe film in China behind this summer's Avengers: Age of Ultron ($68M). Marvel's tiniest superhero also bested Guardians of the Galaxy's 3-day bow by nearly 40% -- that film, also without a well-known roster of Marvel superheroes, earned $95 million after opening in a similar October frame last year. Ant-Man will benefit from little in the way of local or Hollywood competition until Everest opens on November 3 and seems poised to break $100 million.

In second place this weekend, autumn's "black horse" Goodbye Mr. Loser (夏洛特烦恼) held strong, dropping just 43% for $22.1 million from ~100K showtimes. The comedy from Beijing theater troupe Kaixin Mahua has grossed $188.5M since opening during the National Holiday and has moved into the top ten highest-grossing films of all-time in China. It is also the 3rd highest-grossing 2D film of all-time behind Lost in Hong Kong and its predecessor Lost in Thailand. Stateside, the film became distributor China Lion's highest-grossing release ever with $913K.

French animation The Little Prince (小王子) boasted an excellent opening weekend of $10.8 million from ~66K showtimes. The well-received film is an imported "buy-out" film; unlike "profit-sharing" films such as Ant-Man and Inside Out where Hollywood studios earn 25% of the box office revenue, Chinese distributors "buy-out" the rights for a flat-fee and don't have to share the profits. These films are subject to an annual quota outside of the 34 revenue-sharing films allowed into the country by SARFT - around 30 per year.

The Little Prince was shown in both English and Mandarin dubbed versions and naturally, audiences flocked to the Mandarin one. In a smart move, distributor Fundamental Films utilized high-profile celebrity voice talents Huang Bo (Lost in Thailand) and teen idol Jackson Yi to attract family audiences. In contrast, Inside Out's dubbed version was voiced by a cast of virtually unknown Chinese performers which could be one reason the pic failed to hit with Mainland audiences.

In fourth and fifth places, National Holiday favorites Lost in Hong Kong (港囧) and Chronicles of the Ghostly Tribe (九层妖塔) continued their steep descents. Hong Kong earned $2.0 million from ~25K screenings and will finish its run as the fourth highest grossing film of all-time in China with $253 million. Chronicles grossed $1.25 million this weekend from ~17K showtimes. The FX driven action/adventure film has grossed $106.1 million and is easily director Lu Chuan's (City of Life and Death) most successful commercial venture to date.