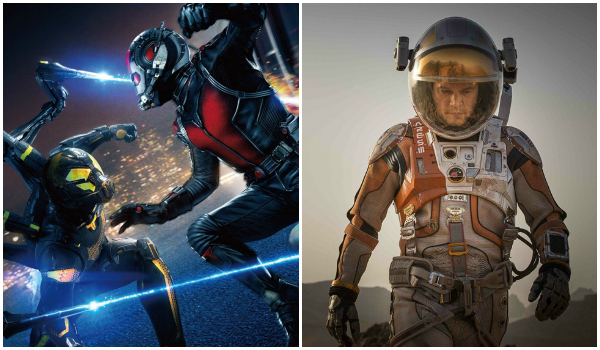 Ant-Man is nearing $500 million worldwide as it continues its successful run in China this weekend with $22.2 million, down just 47% from last weekend. The Disney/Marvel superhero heist flick has earned $82.2 million there through just 10 days of release and is the second biggest original Marvel release of all-time in China behind Guardians of the Galaxy. Ant-Man has earned $314.8 million from the international box office and $493.81 million globally.

Pan sunk to new lows this weekend in China, opening this weekend to a dismal $3.5 million from 5,345 screens. The critical and financial failure picked up $12.3 million from 61 targets this weekend, lifting its overseas cume to $63.6 million and the worldwide total to $93.4 million.

Crimson Peak grossed an estimated $7.8 million from 62 overseas territories this weekend, raising the international total to $26.4 million and the global haul to $48.9 million. Italy was the top opener with $892K on 285 screens with Portugal following with $127K on 63 screens. The top holdover was Russia with $991K for an 11-day total of $4.3 million. Director Guillermo Del Toro’s home country Mexico opens next weekend.

The Intern earned $7.8 million from 66 territories this weekend. South Korea continued its excellent run with $1.7 million from 431 screens in its 5th weekend of release. With $21.4 million total, The Intern has now surpassed the entire runs of Titanic and Hobbit: An Unexpected Journey. Nancy Meyers’ comedy has earned $91.1 million overseas and $155.8 million worldwide.

Maze Runner: The Scorch Trials opened to $1.2 million this weekend from Japan and earned a total of $7.0 million from 31 total overseas territories. The film has grossed $190.3 million overseas and $268.0 million worldwide.

Inside Out posted an additional $4.4 million this weekend from 18 territories. Italy’s $28.3 million as of this weekend makes it the highest grossing Pixar film ever in the market, the second highest Disney animation behind Lion King and the #1 Hollywood imported film of 2015. Despite the Asian markets of South Korea and Japan contributing $32.9M and $32.6M respectively as the second and third highest-grossing overseas territories, Inside Out failed to land in China earning just $15 million after 20 days of release. Inside Out has grossed $486.9 million overseas and $842.216 million worldwide with no remaining territories to release.