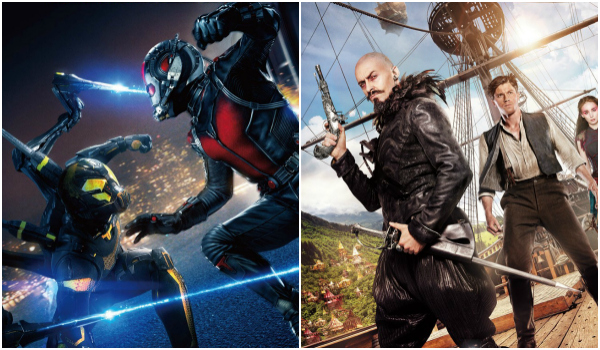 Several new releases including Warner Bros' critically maligned Pan were unable to inject life into the Chinese box office this weekend as revenue totaled just $61.6 million, down 29% from last weekend.

Ant-Man and Goodbye Mr. Loser (夏洛特烦恼) retained the top two spots with both films dropping a respectable 48% from last weekend. Marvel's tiniest superhero scored $21.9 million from ~100K screenings over the weekend, bringing its 10-day cume to $81.8 million. The film looks on track to surpass last year's Guardians of the Galaxy and top $100 million.

In third place, Japanese anime Detective Conan: Sunflowers of Inferno found $9.0 million from ~73K showtimes in its debut. Even though Conan's opening was far below Stand By Me Doraemon's ($33.7M), the film's relative success at the Chinese box office shows promise for future Japanese imports after restrictions were lifted earlier this year.

Another imported animation, France's The Little Prince dropped a spot in its second weekend yet still earned $5.5 million from just ~28,000 showtimes. The film continues to pack in families and scored the highest average attendance per screening of any top ten film this weekend. The Little Prince has earned $20.9 million after 10 days of release, easily outgrossing Pixar's Inside Out ($15M) thanks in large part due to its universal themes as well as its savvy choice of vocal talent.

Also worth mentioning, Pan was unable to crack the top five this weekend. Warner Bros' hope that China would save its critical and financial failure was never realistic given the story's relative obscurity there, and sure enough Chinese audiences shunned the film, giving it just $3.5 million since Thursday's debut. Pan opened on 21% of China's screens, but by Sunday it had lost nearly two-thirds of them.