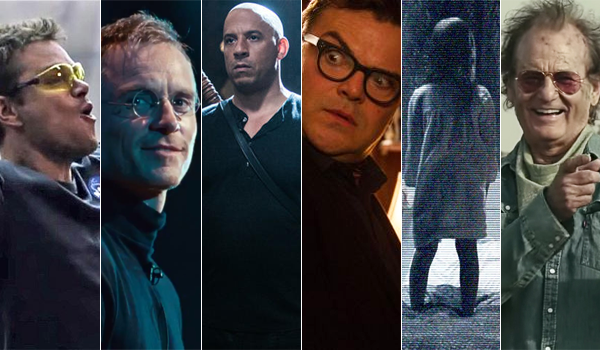 With all five of this weekend's wide releases disappointing to various degrees, Fox's The Martian and Sony's Goosebumps continued to lead the box office. It was a very close race between the two films, with The Martian ultimately outpacing Goosebumps by $207,006 for the frame.

The Martian took in $15.73 million this weekend. The blockbuster Ridley Scott directed 3D sci-fi film starring Matt Damon was down a slim 26 percent. After losing a bit of momentum last weekend, The Martian re-stabilized very nicely this weekend due in part to this weekend's new releases collectively being even softer than expected. The Martian has grossed an impressive $166.19 million in 24 days. The film is currently running 13 percent ahead of the $147.04 million last year's Interstellar grossed after 24 days of wide release and 17 percent behind the $199.65 million 24-day gross of 2013's Gravity.

Goosebumps followed closely behind in second with $15.53 million. The 3D horror comedy starring Jack Black was down 34 percent from last weekend's debut. Goosebumps experienced a solid second weekend hold and likely got an extra boost this weekend from Halloween falling next Saturday. The ten-day take for Goosebumps stands at $43.74 million. That is in line with pre-release expectations and places the film 26 percent ahead of the $34.80 million ten-day start of last year's Ouija (which fell 46 percent in its second weekend to gross $10.74 million).

Disney and DreamWorks' Bridge of Spies held up very nicely this weekend with a third place take of $11.37 million. The critically acclaimed Steven Spielberg directed thriller starring Tom Hanks decreased only 26 percent from last weekend. Bridge of Spies has grossed a promising $32.59 million in ten days. That places the film 21 percent behind the $41.04 million ten-day gross of 2004's The Terminal (which fell 31 percent in its second weekend to take in $13.14 million). Bridge of Spies is likely to continue to hold up well going forward thanks in part to strong word of mouth.

Lionsgate's The Last Witch Hunter delivered the weekend's top debut with a fourth place take of $10.81 million. The Vin Diesel led action film opened below pre-release expectations and an underwhelming 43 percent below the $19.03 million debut of 2013's Riddick. Like Riddick, The Last Witch Hunter is likely to be front-loaded. The Last Witch Hunter received a lackluster B- rating on CinemaScore and has a current Flixster audience score of 54 percent; neither of which is an encouraging sign going forward. It should be noted that The Last Witch Hunter carried the largest price tag of this weekend's five new releases.

After a promising two-week start in platform release, Universal's Steve Jobs stumbled as it expanded into wide release with a seventh place take of just $7.11 million. The Danny Boyle directed drama starring Michael Fassbender was the weekend's biggest disappointment when taking into account expectations. Despite strong critical reviews, the film's appeal with moviegoers in major metropolitan areas clearly isn't transferring over to moviegoers throughout the rest of North America. This weekend's performance for Steve Jobs barely outpaced the $6.71 million debut of 2013's Jobs (which was received far less favorably by critics) and was 41.5 percent softer than the recent $12.15 million wide expansion of Sicario. The 17-day total for Steve Jobs stands at $9.82 million. Word of mouth does appear to be positive for the film, as it received an A- rating on CinemaScore and currently boasts a 79 percent Flixster audience score.