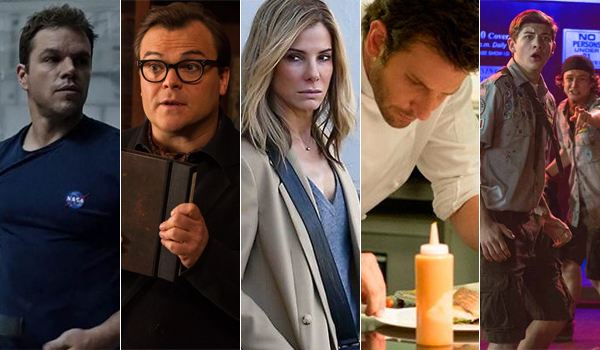 As had been expected heading into the weekend, holdovers remained at the top of this weekend's box office. Fox's The Martian continued to lead the way with $11.72 million. The blockbuster Ridley Scott directed 3D sci-fi film starring Matt Damon has now led the box office for four of the past five weekends. The Martian was down just 25.5 percent, which represented the weekend's strongest percentage hold among wide releases. It should be noted that The Martian got an added boost this weekend from receiving a one-week IMAX run. The Martian has grossed an impressive $183.12 million in 31 days. The film is currently running 16 percent ahead of the $158.45 million last year's Interstellar had grossed after 31 days of wide release and 16 percent behind the $218.89 million 31-day take of 2013's Gravity.

Goosebumps claimed second place with $9.87 million. The 3D horror comedy starring Jack Black fell 36 percent from last weekend. That represented a very solid hold, especially since family films usually experience sizable percentage declines when Halloween falls on either Saturday or Sunday. Goosebumps surpassed the $50 million mark this weekend and has grossed $56.76 million in 17 days. That paces the film 31 percent ahead of the $43.33 million 17-day gross of last year's Ouija. Goosebumps will face new competition for family audiences next weekend with Fox's The Peanuts Movie entering the marketplace on Friday.

Disney and DreamWorks' Bridge of Spies placed in third with $8.39 million. The critically acclaimed Steven Spielberg directed thriller starring Tom Hanks declined a slim 26 percent. Thanks in part to continued strong holding power; Bridge of Spies has grossed a promising $45.53 million in 17 days. That already gives the film a current total gross to opening weekend ratio of 2.96 to 1. Bridge of Spies is running 16 percent behind the $54.33 million 17-day take of 2004's The Terminal.

The Last Witch Hunter rounded out this weekend's top five with $5.16 million. The Vin Diesel led action film from Lionsgate fell a sizable, but understandable 52 percent. The Last Witch Hunter has grossed a softer than expected $19.03 million in ten days and is running a lackluster 39 percent behind the $31.11 million ten-day take of 2013's Riddick.

Turning to this weekend's new releases, Burnt debuted in sixth place with $5.00 million. The Bradley Cooper led dramedy from The Weinstein Company debuted below its already low pre-release expectations. As was the case last weekend, adult moviegoers continued to clearly showcase their disinterest in the weekend's new slate of wide releases. Poor critical reviews and opening over Halloween weekend didn't help matters for Burnt either. Burnt opened a discouraging 48 percent below the $9.67 million debut of Aloha earlier this year (which was a very soft performer in its own right). As was the case with Aloha, the performance of Burnt is especially disappointing for Cooper coming so soon after the break-out performance of American Sniper at the beginning of the year. Burnt received a lackluster B- rating on CinemaScore.

Scouts Guide to the Zombie Apocalypse had even less of an impact at the box office with a twelfth place start of $1.84 million. Paramount's modestly budgeted horror comedy also debuted below its already low expectations. The opening weekend performance for Scouts Guide was in the same neighborhood as the respective $1.47 million and $1.38 million starts of Rock the Kasbah and Jem and the Holograms last weekend. As is the case with Paramount's Paranormal Activity: The Ghost Dimension, a number of major theatre chains are not playing Scouts Guide as a result of Paramount's experimental shorter theatrical to VOD window for the film. Scouts Guide to the Zombie Apocalypse received a B- CinemaScore rating.