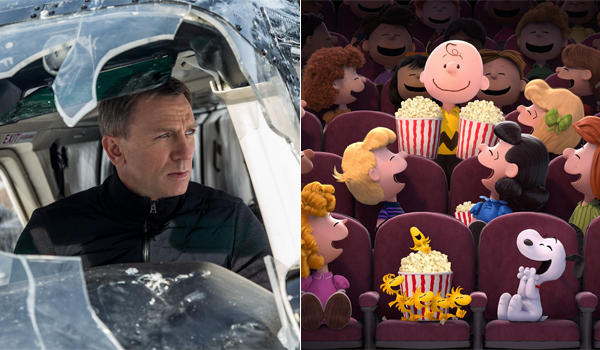 LOS ANGELES - November 4, 2015 - The new James Bond adventure, "Spectre," is taking control of Fandango's Fanticipation movie buzz indicator with 96 out of 100 points, while "The Peanuts Movie" is following closely with 90 out of 100 points.

"There's something for everyone at theaters this weekend," says Fandango Chief Correspondent Dave Karger. "'The James Bond franchise continues to dazzle with ‘Spectre,' a spectacular action movie with cool car chases, crazy fight scenes and a deliciously evil villain in two-time Oscar winner Christoph Waltz. Based on our advance ticket sales on Fandango, ‘Spectre' just might match its fantastic international box office on our shores. At the same time, the sweet ‘The Peanuts Movie' is appealing to multi-generational audiences with its charmingly nostalgic animation and family-friendly 3D entertainment."

According to a survey of "Spectre" moviegoers on Fandango:
· 96% are glad that "Skyfall" director Sam Mendes returned for "Spectre";

· 93% would like to visit one of the exotic locations seen in a James Bond movie;

· 89% are excited to see Christoph Waltz as a Bond villain;

· 47% say they are most interested in the film's intense action; 23% picked the cool gadgets & cars; 17% identified the film's scenic destinations; 9% chose wry humor.

According to a survey of "The Peanuts Movie" moviegoers on Fandango:
· 98% grew up watching "Peanuts" holiday specials on TV;

· 84% have shared those "Peanuts" specials with their kids;