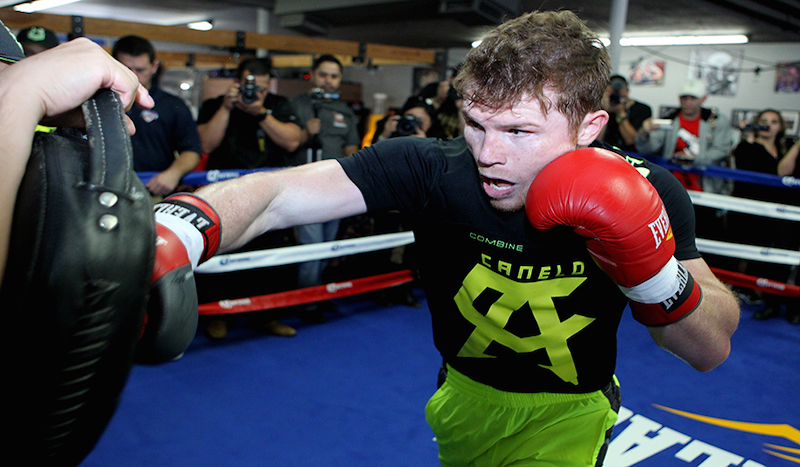 Mexican fighter Saul "Canelo" Alvarez (pictured) will face off against Puerto Rico's Miguel Cotto on November 21. Fathom will be broadcasting the event to select cinemas across the United States. Photo courtesy of Fathom Events.

There are moments that are just meant to be seen on the big screen. The score was tied after 118 minutes of a grueling playoff final between soccer archrivals Mexico and the U.S. played on October 10, with the winner set to qualify for the 2017 FIFA Confederations Cup. Two minutes before the end of extra time, Mexican defender Paul Aguilar chased down a ball as it innocently floated inside the U.S. 18-yard box. There was nothing U.S. goalkeeper Brad Guzan could do as the resulting volley hit the back of the net and broke the hearts of U.S. fans everywhere. There are few things that passionate Mexico fans (such as, for example, the author of this article) could enjoy more on the big screen. Fortunately, those moments promise to become more common in the coming years, not only because of Mexico's on-field dominance against the United States, but also due to the growing adoption of alternative content by North American exhibitors and its embrace by audiences.

The Mexico-U.S. match was made available live in North America through Fathom Events, the inaugural program in its partnership with Fox Sports 1. Live sport has long been considered the golden goose of alternative content, its overwhelming potential mired in the legal swamp of broadcast rights. "The rights are a minefield, but we're slowly getting it figured out," says Fathom CEO John Rubey. "We've done British Premier League soccer, we've done several events with Floyd Mayweather Jr., the NHL stadium series. You see a lot of audiences coming out for those who want to experience the scale of the cinema together as a family; parents don't want to take their kids to a bar with people smoking and drinking. We can provide an experience where there's scale in a family-friendly environment."

Fathom's business has grown since spinning out from its previous majority owner, NCM, in late 2013. While NCM still owns a minority share of the company (4%), the majority is split between top exhibitors Regal, AMC, and Cinemark. "In 2013 we had 2 million admissions, in 2014 we had 2.5 million, and we've already blown through 3 million this year with an entire quarter left to go," says Rubey, addressing the rapid rise of alternative content in North America. The pace of growth is in line with the global growth of the business as a whole. The latest IHS report on alternative content (termed "event cinema" in the report) signals a 32.1 percent year-over-year growth in 2014 that resulted in a global gross of $277.2 million. At that pace it will reach $1 billion worldwide by 2019.

Alternative content found a foothold in North America through arts and culture programming like live opera and theater. In many ways, Fathom's transformation into a market leader can be traced to its fruitful partnership with the Metropolitan Opera's Live in HD series. Already in its 10th season, The MET: Live in HD combines core content (live opera performances) with special features exclusive to cinemas, becoming an experience in itself as opposed to a simple broadcast. "They give you an experience that you can only see in the theater," says Rubey. "It really sets the standard for the live cinema experience."

Several other companies are following a similar blueprint, approaching alternative content as an event and experience in its own right. Arts Alliance, specializing in arts and culture programming and events with a broader popular appeal, scored a huge hit working with boy band One Direction. Brad Carroll, managing director of North America at Arts Alliance, cites the band's "passionate and engaged fan base" as crucial to the event's success. "Their fans were eager to get to the theater and share an experience with other fans as soon as they were aware the opportunity was available. It did not take a lot of convincing that they wanted to go; they just needed to know it was there."

Bud Mayo, president of Carmike's Alternative Programming and Distribution division since Digiplex, the circuit he founded, was acquired by the Georgia-based exhibitor last year, has also been busy offering viewers a premium, exclusive event experience at the movies. Carmike has recently paired up with distributor Nehst Out to create DigiNext, a direct-to-consumer movie-release platform that can be a key to the further growth of alternative content in North America. DigiNext will be screening the concert film American Saturday Night: Live from the Grand Ole Opry, a country music show featuring backstage moments for cinema audiences, in select cinemas December 4-10. Mayo points out that these special events are quickly expanding beyond the opera and concert stage. "We are seeing traction with Bollywood and other ethnic product," says Mayo, adding that "anime and faith-based features" are also making an impact. Rubey sees the same trend with Fathom: "Our audience has never been wider or more diverse."

Gaming is one of those new, surging categories. "We think gaming potentially offers more promise than anything else we're looking at right now," says Rubey. U.K. exhibitor Vue Entertainment took a bold stance in its support of competitive gaming, or eSports as it's come to be known, earlier this year with the opening of a dedicated eSports gaming arena in London's Fulham neighborhood in alliance with GFinity, one of the biggest eSports companies in the world. "Thirty of our sites are committed to showing that content," said Johnny Carr, content manager of Vue, at a panel at CineEurope this summer. Vue partners with gaming companies that already come in with significant sponsorships, like League of Legends-sponsored by Coca-Cola. "We can't just put it on screen and expect people to turn up. We have to give them an incentive to come out of their bedrooms. We have to partner a gaming company; we have to create an event."

Despite the diversity of product, alternative content at the cinema doesn't have to stray too far from traditional moviegoing fare to find success. Fathom partnered with Fox to present The Night Before our Stars, a special screening event of The Fault in our Stars, on the eve of the film's release in 2014. The event included a live Q&A with stars Shailene Woodley, Ansel Elgort, and Nat Wolff, along with author John Green and director Josh Boone, with audiences submitting questions via a Twitter hashtag; performances by artists from the soundtrack; and a commemorative charm bracelet for all those in attendance. The $25 ticket price contributed to at least $5 million in additional box office for Fox, according to Fathom. The company returned to the concept this summer with a similar prerelease event for Disney Pixar's Inside Out.

Bud Mayo still believes there is room to grow in the immediate future. "Progress is being made with major, well-marketed releases," he explains, citing several high-performing programs, "but theaters have not fully committed to marketing and audience building for smaller, more targeted titles." He considers 2 to 3 percent of admissions in North America to be a realistic benchmark for alternative content, setting the bar on his team at Carmike higher, 4 to 5 percent of admissions, as goals to reach in the coming years. John Rubey echoes that sentiment in his own analysis of what alternative content can mean for the industry. "It's not going to overtake theatrical," he says, "but if you put a good alternative content title on Monday through Thursday, it will likely make more money than all the other auditoriums combined."