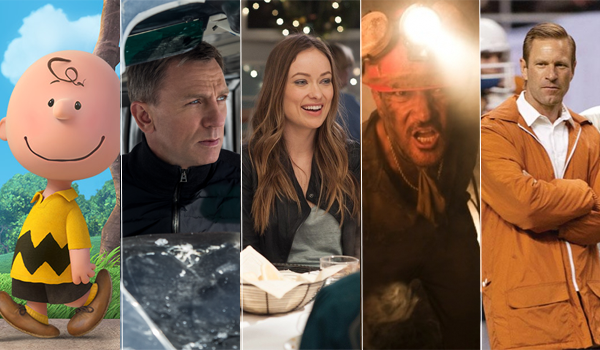 Spectre remained in first place at the box office this weekend with $33.68 million. The latest installment of Sony and MGM's James Bond franchise was down a respectable 52 percent from last weekend's debut. This weekend's hold came as welcome news after the film opened on the very low end expectations last weekend. The second weekend percentage hold for Spectre was stronger than both the second weekend percentage hold of 2012's Skyfall (which fell 53.5 percent to gross $41.10 million) and the second weekend hold of 2008's Quantum of Solace (which fell 60 percent to gross $26.71 million). While this weekend's hold was helped by the relative lack of new competition in the marketplace, it also suggests that Spectre is going over better with moviegoers than it has with critics and is a positive sign for the film going forward. Spectre has grossed $128.98 million in ten days. That places the film 20 percent behind the $160.94 million ten-day take of Skyfall and 19 percent ahead of the $108.79 million ten-day gross of Quantum of Solace.

The Peanuts Movie placed in second with $24.01 million. The 3D computer animated adaptation from Fox and Blue Sky was down 46 percent from last weekend. That represented a hefty second weekend decline for a computer animated film outside of the summer season and came as a bit of a surprise, especially given the strong critical reviews for The Peanuts Movie. This weekend's hold suggests that the pre-existing Peanuts fanbase led to some built-in front-loading for the film last weekend. The Peanuts Movie is still having a solid run so far with a ten-day take of $82.30 million. That places the film 12 percent behind the $93.65 million ten-day take of 2012's Wreck-It Ralph (which fell 33 percent in its second weekend to gross $33.01 million). It will be very important for The Peanuts Movie to stabilize next weekend, especially with Disney's highly anticipated The Good Dinosaur entering the marketplace on Wednesday, November 25th.

Love the Coopers was the weekend's strongest new wide release with a third place start of $8.32 million. The ensemble holiday comedy from CBS Films and Lionsgate opened slightly ahead of its modest pre-release expectations. Without taking into account ticket price inflation, Love the Coopers opened 33.5 percent below the $12.52 million start of 2005's The Family Stone. Like that film, Love the Coopers will hope to have a lengthy run at the box office with help from the holiday season. On the other hand, Love the Coopers has been received poorly by critics and received an underwhelming B- rating on CinemaScore, so it remains to be seen whether or not the film will prove to be critic proof going forward.

Fox's The Martian took fourth place this weekend with $6.71 million. The blockbuster Ridley Scott directed 3D sci-fi film starring Matt Damon continued to hold up very well, as it was down just 26 percent from last weekend. The 45-day total for The Martian stands at a very impressive $207.39 million. That places the film 21 percent ahead of the $171.54 million grossed by last year's Interstellar after 45 days of wide release and 14 percent behind the $240.38 million 45-day gross of 2013's Gravity. On Monday Fox announced that it has scheduled Alien: Covenant (which will also be directed by Ridley Scott) for release on October 6th, 2017.

The 33 rounded out the weekend's top five with $5.79 million. The Warner Bros. drama starring Antonio Banderas opened below expectations, which were modest to begin with. Audiences ultimately weren't interested in the theatrical re-telling of the 2010 Copiapó mining accident and mixed critical reviews didn't help matters either. The film opened an underwhelming 47.5 percent below the $11.02 million debut of McFarland, USA earlier this year. The 33 did receive an encouraging A- rating on CinemaScore and registered an estimated opening weekend to Friday ratio of 3.15 to 1, so it is possible that the film could hold up well going forward.

My All American made even less of an impact in wide release this weekend with a debut of just $1.37 million. The Aaron Eckhardt led sports drama from Aviron Pictures opened a disappointing 66 percent below the recent $4.00 million debut of Woodlawn and wasn't helped out by being released so soon after Woodlawn. My All American received a strong A rating on CinemaScore, but that likely won't mean much going forward given the film's soft start.

Meanwhile, Universal's By the Sea had an unsuccessful platform launch with $96,250 from ten locations. That gave the poorly reviewed Angelina Jolie Pitt directed film starring Jolie Pitt and Brad Pitt a per-location average of just $9,625, which is obviously soft for a higher profile platform release and will make it even tougher for the film to receive significant expansions going forward.

Tags: Spectre, The Peanuts Movie, Love the Coopers, The Martian, The 33, My All American, Prem Ratan Dhan Payo, Spotlight, By the Sea, north-america