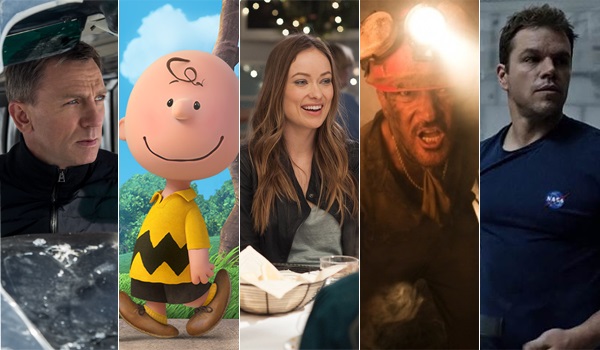 Spectre took in $2.06 million on Thursday to lead the daily box office for one last day. The latest installment of Sony and MGM's James Bond franchise will obviously fall out of first place on Friday with the arrival of Lionsgate's The Hunger Games: Mockingjay - Part 2 in the marketplace. Spectre was already feeling the effects of Thursday's evening launch of Mockingjay - Part 2, as it was down 13.5 percent from Wednesday and down 53 percent from last Thursday. Spectre was the week's top film with a weekly take of $43.80 million. That was down 54 percent from the previous week and brings the film's two-week total to a solid $139.10 million.

The Peanuts Movie held steady in second place with $0.883 million. The 3D computer animated adaptation from Fox and Blue Sky was up 2 percent over Wednesday, which represented the day's strongest daily percentage hold among wide releases. The Peanuts Movie placed in second for the week with $27.85 million. While The Peanuts Movie was down a surprisingly sharp 52 percent from its opening week performance, the film has still grossed a solid $86.14 million in two weeks of release.

Love the Coopers grossed $0.543 million to remain in third. The ensemble holiday comedy from CBS Films and Lionsgate was down 13 percent from Wednesday's performance. Love the Coopers placed in third for the week with a seven-day start of $10.99 million. The film continues to perform slightly ahead of pre-release expectations and will hope to hold up well throughout the holiday season.

Fox's The Martian continued to claim fourth with $0.417 million. The blockbuster Ridley Scott directed 3D sci-fi film starring Matt Damon declined 11 percent from Wednesday and a solid 38 percent from last Thursday. The Martian took fourth place this week with a weekly gross of $8.66 million. The film was down 33 percent from the previous frame and has grossed a very impressive $209.34 million through seven weeks.

The 33 rounded out its lackluster first week of release with a sixth place take of $0.345 million on Thursday. The Warner Bros. drama starring Antonio Banderas fell a sharp 15 percent from Wednesday. The 33 took fifth place for the week with a softer than expected seven-day start of just $7.66 million.

Tags: Spectre, The Peanuts Movie, Love the Coopers, The Martian, The 33, north-america