NORTH AMERICA: Weekend Estimates: 'Mockingjay – Part 2' Arrives with Lower than Expected $101.0M; 'The Night Before' Modest in Fourth with $10.1M; 'Secret in Their Eyes' Lackluster in Fifth with $6.6M 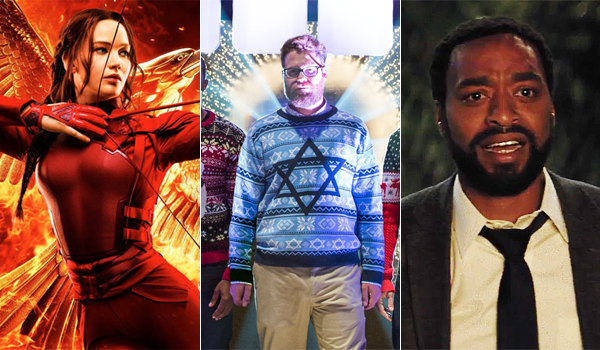 After leading the box office for the previous two weeks, Spectre fell to second place this weekend with an estimated $14.6 million. The latest installment of Sony and MGM's James Bond franchise was down a sharp 57 percent from last weekend. This weekend's hold was especially lackluster given that Mockingjay - Part 2 wasn't as dominant as previous Huger Games films have been. Spectre continues to perform on the very low end of expectations with a 17-day take of $153.70 million. That places the film just 9 percent ahead of the $141.42 million 17-day gross of 2008's Quantum of Solace and 30.5 percent behind the $221.14 million 17-day take of 2012's Skyfall (though it should be noted that the third weekends for both Quantum of Solace and Skyfall fell over Thanksgiving weekend).

The Peanuts Movie followed in third with an estimated $12.8 million. The 3D computer animated adaptation from Fox and Blue Sky was down a sizable 47 percent. While that actually represented one of the weekend's stronger percentage holds among wide releases, The Peanuts Movie continues to display significant front-loading for a well-received family film. The Peanuts Movie has still grossed a solid $98.94 million through 17 days of release. The film is currently running 19 percent behind the $121.75 million 17-day take of 2012's Wreck-It Ralph. Looking ahead, family films traditionally experience strong holds over the Thanksgiving holiday frame, but The Peanuts Movie will also be facing tough new competition from Disney's The Good Dinosaur beginning on Wednesday.

Sony's The Night Before debuted in fourth place with an estimated $10.1 million. The R-rated comedy starring Joseph Gordon-Levitt, Seth Rogen and Anthony Mackie debuted below its already scaled back expectations. The Night Before opened 51 percent below the $20.72 million opening weekend of 2013's This Is The End (which also had a deflated opening weekend from launching on a Wednesday) and instead opened much more in line with the $12.95 million debut of 2011's A Very Harold & Kumar 3D Christmas. It appears that potential for The Night Before was limited in part from the film coming across as more of a niche comedy as opposed to a more mainstream comedy.  On a positive note, The Night Before will have a good chance of holding up well throughout the holiday season and the film did carry a modest production budget of $25 million. The Night Before received an A- rating on CinemaScore, which is an encouraging sign going forward.

Meanwhile, upon expanding into moderate release this weekend Open Road's Spotlight took eighth place with an estimated $3.60 million. The awards season hopeful starring Mark Ruffalo and Michael Keaton registered a solid per-location average of $6,026 from 598 locations. However, it does appear that Spotlight could have problems building momentum as it expands further given how much its per-location average tailed off this weekend. Birdman faced a similar situation last year as it expanded into more locations. Spotlight has grossed $5.88 million in 17 days, which places the film 20.5 percent ahead of the $4.88 million 17-day platform start of Birdman.

Saturday Update: Lionsgate reports this morning that The Hunger Games: Mockingjay - Part 2 bowed to an estimated $46 million on opening day Friday. That figure includes a total of $16 million earned from Thursday night screenings as well as Mockingjay double feature showings from Wednesday night. While the finale's opening day gross marks a new low for the franchise -- coming in 16.5 percent behind Mockingjay - Part 1's $55.1 million first day last year -- it's still a healthy figure for the end of what has been a strong run by an unexpected blockbuster franchise. Last year's penultimate film showed off somewhat stronger legs than initially expected, and the same will probably happen for Part 2. Early word of mouth is solid with an 81 percent Flixster score (comparable to its predecessor's 83 percent). BoxOffice is projecting a $100 million opening weekend.

Spectre slipped down to second place to begin its third weekend of release, pulling $4.28 million for a 58 percent drop from last Friday. The 24th James Bond film's 15-day domestic total now stands at $143.4 million, putting it 10 percent ahead of the pace of Quantum of Solace and 28 percent behind Skyfall. BoxOffice projects a $14.4 million frame.

In third place, The Peanuts Movie slid 48 percent from last Friday to $2.92 million yesterday. With $89.1 million in the bank through 15 days, the well-received animated adaptation is pacing 17 percent behind Wreck-It Ralph. Look for a third weekend around $12.6 million.

Debuting in fourth place, The Night Before unfortunately came in below expectations with a $3.56 million opening day. By comparison, 50/50 (which was also helmed by Jonathan Levine and co-starred Seth Rogen and Joseph Gordon-Levitt) opened to $2.89 million on opening day back in September 2011. The raunchy R-rated Christmas comedy obviously came in far behind the initial performance of This Is the End as well, but the good news is that with the holidays right around the corner it's possible legs could still save the day for the $25 million film. Early word of mouth is positive with a 75 percent Flixster score -- not far behind the 80 percent of Neighbors one day after release -- and an "A-" CinemaScore. BoxOffice is projecting a $10.5 million opening weekend.

Filling out the top five, Secret In Their Eyes debuted with $2.31 million yesterday. That's unfortunately 44 percent below the opening day of STX's first release back in August, The Gift ($4.12 million). With a 52 percent Flixster score, it's likely the film will have a short theatrical run as the holiday market will become increasingly competitive next week. BoxOffice is projecting a $7 million opening weekend.

Expanding into a broader limited release, Spotlight took in $1.02 million from 598 locations on Friday for a $1,708 per-screen average. That brings the strongly reviewed film up to $3.3 million domestically so far as it continues to build momentum heading into awards season. BoxOffice is projecting a $3.4 million weekend.

Friday Update: The Hunger Games: Mockingjay - Part 2 earned an estimated $16 million during Thursday night's early shows, multiple sources report. That's $1 million shy of last year's Part 1, but still certainly an excellent figure for the franchise finale. Should the film hold up similarly to its predecessor, Part 2 looks to remain on pace for a weekend between $115-125 million.

Meanwhile, The Night Before took in $550,000 from 2,410 locations last night. That's a modest figure will falls short of most comparison titles like This Is the End ($2.2 million) and Neighbors ($2.56 million) -- however those films opened during summer when the target male audience is more likely to rush out before the weekend.

We'll have more in-depth analysis and early weekend estimates when official Friday estimates are released by the studio on Saturday morning.

Tags: The Hunger Games: Mockingjay - Part 2, Secret In Their Eyes, The Night Before, north-america