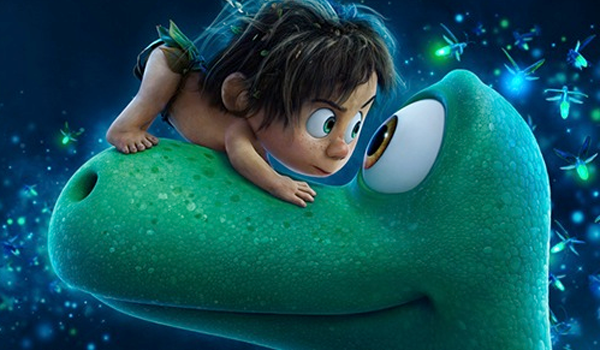 Pixar wouldn't be Pixar if it didn't continually challenge itself. That's exactly what the venerable studio is doing by releasing two films in the same calendar year in 2015, the first time they've ever attempted such a feat. Following summer's beloved Inside Out, their attention has now shifted to The Good Dinosaur -- a project with great potential from the outset, but one that the world almost didn't get to see.

If the title sounds familiar, it's because Good Dinosaur has been in the works since 2009. Even for animation, that's an unusually long gestation period (something director Peter Sohn himself admits upfront). When the project wasn't quite jelling a few years ago, Sohn, with his experience working as an animator on Finding Nemo, The Incredibles, Up, WALL-E, Brave, and Ratatouille -- and as writer and director of the studio's 2009 short film Partly Cloudy -- was tapped to "refocus and simplify" the film. He took over the reins as director in 2013, setting out to give the story a new voice.

Sohn specifically credits his work on Pixar veteran Brad Bird's The Iron Giant with preparing him for The Good Dinosaur. The 1999 hand-drawn animated film, which unfortunately never found much commercial success, won over critics and has an enduring legion of fans to this day. "That experience taught me a lot about priorities. Because that movie didn't have a lot of money, it was always about trying to do whatever idea is the best. It can come from anywhere -- if you're hungry, you get the work."

Sohn's admiration for Pixar is underscored by the fact that "the executives are all filmmakers, and they've all been on that journey." Having the trust and support from producers who felt like family, Sohn says, allowed him and his team to approach the project with confidence and a fresh perspective.

Andrew Stanton , director of Finding Nemo and WALL-E, impressed upon Sohn the difficulty of developing a story. He said, "Try and fail as fast as you can," Sohn recalls. "When you follow the what-ifs and they don't pan out, reinvest your heart into something else and keep going."

Sohn, who grew up working in his dad's grocery shop, says family is very important to him, and The Good Dinosaur has evolved around that value. He adds that he's always loved family-centric movies; he includes the films of David Lean and Steven Spielberg among his influences.

Refusing to let a great concept falter, and working in a place where ambition and creative freedom are both encouraged and practically required, Sohn and his team did what Pixar tends to do best: work minor miracles. By all accounts, it was his and his team's passionate drive that willed the final product into existence.

The movie's concept is more than just another family-themed narrative from the animation giant. At its heart, The Good Dinosaur is a classic boy-and-his-dog tale -- except they've turned it on its head. In a reversal of the genre, a young and adorably vulnerable Apatosaurus named Arlo is cast in the traditional boy's role. When he's separated from his family, he must learn how to navigate the frontier world of the dinosaurs in his trek to reunite with them. In the process, he encounters a human boy named Spot who has no family but knows how to survive on his own in the wild. Together, their journey begins.

Along with the usual one-two punch of heart and humor that we've come to know, love, and expect from Pixar projects, the studio has set new benchmarks in animation throughout production. For example, by using United States Geographical Survey data and Google Earth, the art department created digital sets more complex than anything they'd attempted previously. Sets Supervisor David Munier boasts, "You can see as far as 50 miles out in the background of certain scenes."

Those USGS surveys were based on locations in the northwestern United States, and Sohn and his team spent time in the wilderness themselves to research what would become the setting of the film in an alternative past. (The premise of the film: What if a giant meteor never killed Earth's dinosaurs?) From braving rapids to hiking, horseback riding, and exploring the vast landscapes of the tranquil Grand Teton National Park in Wyoming, the crew gained a firsthand experience of what Arlo and Spot's arduous adventure might look and feel like.

One particular and crucial scene early in the film depicts Arlo caught up in a strong river current. A trick they used to aid the virtual workload was to recycle and relight certain renderings of flowing water. Effects Supervisor Jon Reisch loosely compared the method to one used in Spielberg's Duel, which featured a car chase spanning far more than the simple mile or two of road they actually used and continually re-purposed to shoot on.

He further explained that "getting water right is really tough" in animation because of the density, physics, motion, lighting, and other elements crucial to providing realism. The footage they screened looked spectacular, though. Reisch went on to note that The Good Dinosaur crushed the studio's previous record for storage of effects data, taking up a whopping 300 terabytes (over 300,000 gigabytes), or about 10 times the amount used on Monsters University. "Just the rivers themselves are bigger than the entirety of Cars 2 with all the characters, environments, and effects."

Pushing new technical boundaries allowed the creators to build a massive set to play in. Virtual location scouting provided a wealth of settings ranging from breathtaking and beautiful to mysterious and dangerous. The result appears to be the widest visual scope yet for Pixar, with the team repeatedly mentioning that only Brave has come anywhere close.

The expansion of the team's digital playground turned out to be a boon to the storytelling too. "In the past, we would only linger on shots every so often. Here, Peter wanted the scenery to be a character itself," says Story Supervisor Kelsey Mann. Because the plot revolves around Arlo's emotional and physical struggles against nature, the marriage of his journey with Pixar's biggest canvas to date is a match made in heaven.

Mann and screenwriter Meg LeFauve, both of whom have previous experience on Pixar films, joined the project shortly after Sohn was named director. "We were both fresh eyes coming in," says LeFauve. Although there was need for an expedited production schedule at that point, both view it as a benefit to the movie's development. "The fast pace created a lot of camaraderie," she says.

Reflecting on some of the broader enhancements they brought to the story, Mann adds, "We were building a mood; a quiet and poetic way to tell the story was a big change."

LeFauve adds, "The immersive feeling is probably the biggest change. It used to be a quest movie, and now it's a 'get home' movie. It became more able to focus on the relationship of these two boys."

"There were a lot of discussions about Arlo and who he is," LeFauve continues. "We had to layer him up because you can't just say ‘he's afraid' or ‘he's incapable.' That only goes so far. It has to also become about ‘what does he want?' Yes, he wants to get home, but what does he want as a boy? Part of why he's going on this journey is to grow up and become that man he wants to become, but it's also because he's been wounded, and at this age he can't find the psychological or emotional way to come to terms with it. So this ‘dog' comes into his life to help him open his heart again."

The team's respect for Peter Sohn was another a recurring theme in our conversations. Discussing the process of storyboarding with a roomful of writers, editors, and animators, Mann stresses that "when you really love something, you give it your all. It's a vulnerable state to be in, especially when you're working in an environment like this, because you're reworking it over and over. It's hard not to have your heart broken, but you have to put yourself in it to make a great film. Pete allowed that kind of safe environment to bring yourself -- every fiber of your being -- into what you do. It was a fantastic way to work."

Pixar has never shied away from heart, humor, or ambition -- the recipe of their undeniably winning formula -- and the time and effort it took to achieve those things come across in early footage shown to us last month. With its depth of visual scope and genre twisting, both driven first and foremost by the story, The Good Dinosaur looks to hold up the studio's revered cinematic reputation while simultaneously introducing us to yet another talented young feature director with the ability to harness a creative vision.

Indeed, the long wait for Pixar's 16th film in 20 years looks to be well worth it.